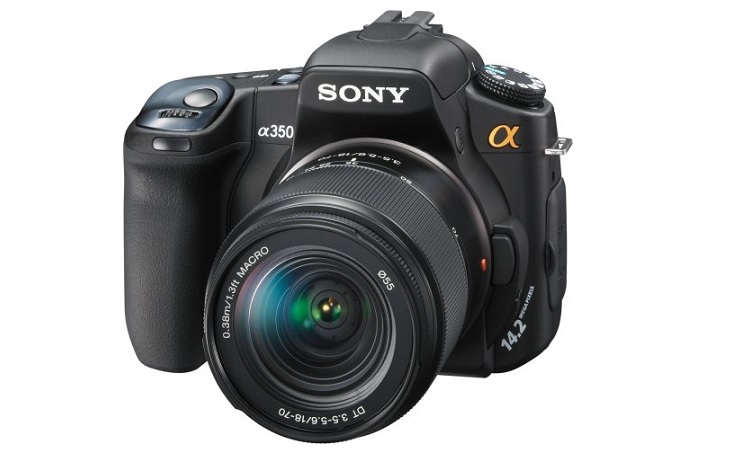 Sony has a long history of creating quality DSLR cameras. One of their groundbreaking models was the a200. Since then, the Sony a350 was released and provided photographers with an affordable DSLR, bursting with features. Despite being release in 2008, this entry-level DSLR is still available.

Furthermore, although its technology is somewhat dated, it serves as a viable option for beginners. For those entering the world of DSLR photography, an affordable option like the Sony a350 could be a brilliant choice. In this review, we analyze the camera’s main features. Moreover, we look at its design, performance, and how it compares to a similar level DSLR model.

The Sony a350 was considered to be a camera bursting with features when it was released. Some people, however, thought that it’s an abundance of features masked its poor basic performance. It is a DSLR camera that has both live view and built-in image stabilization. At the time, these were groundbreaking features, but we now take them for granted. Here are the basic specs:

The CCD Sensor provides 14.2MP image resolution, which again, in 2008, was the second-highest in existence next to the Pentax K20D. Although we now have DSLR cameras that offer 30MP+ image resolution, the sensor of the Sony 350 still offers excellent image quality.

As the camera has older technology, there is no wireless connection – to download photos you must use either a USB cable or an SD card reader.

One area where the Sony a350 lacks is its design. It has now been overshadowed by newer DSLR models. Originally released in 2008, this DSLR does not have the latest technology. Furthermore, it does have some questionable design features.

As you will see, however, it does have a great aesthetic design in terms of handling – it is the button layout that is detrimental. It is relatively lightweight and small, thus making it easy to handle and carry. Furthermore, it has an ergonomic shape, and a comfortable grip on the right-hand side. This is covered with a textured surface making it easy to grip.

The main issue users have experienced with the Sony a350 is the rear button layout and dials. The rear of the camera has an abundance of buttons, which is fine; it’s the layout that is confusing. For example, the menu button and other main function buttons are located on the left-hand side – this goes against traditional DSLR design and is a little uncomfortable. Furthermore, the main program dial is on the left too – it’s just counter-intuitive and not what you would expect. Some users find this difficult to adapt to.

The performance of this camera is a double-edged sword with the design. It has a great basic set of features that give users full control over their photography. Furthermore, there is a myriad of shooting modes including shutter priority, aperture priority, and full manual mode. Regardless of whether you want basic shooting modes or full control, this camera delivers.

On the flip side, the basic lens of this device has poor reviews. People question the overall utility of the kit lens – it is advisable to use other Sony lenses. Moreover, the image quality does not remain consistent at the extreme zoom levels. That being said, the Sony a350 does offer great basic image quality. Photos taken with this camera look sharp and have great clarity. It’s only when you look at the fine detail, that you notice discrepancies.

So how does this camera compare to a similar class model? A sound comparison is the Canon PowerShot SX420. This is an entry-level bridge camera that is another great choice for beginners.

From the offset, we can see that the PowerShot SX420 offers superior image quality and recording. Its 20.0MP CMOS sensor is more modern and provides better basic image resolution. Furthermore, it offers full HD video recording capabilities, supported by a great autofocus system.

The Sony a350 isn’t a bad camera – it is just overshadowed by modern alternatives. The Canon PowerShot SX420 is proof of this. This camera is lighter, smaller, and has a better button layout too. You can see the difference that purchasing a modern camera makes – the 2008 Sony a350 simply doesn’t have the same availability of features. We have created a basic comparison table below:

This depends on your skill level and requirements. You have to remember that this is an old camera. Since it came out, DSLR camera technology has improved greatly. Sony has a fantastic range of modern DSLR and mirrorless devices like the a6600 that could be a better choice.

The Sony a350 is a solid choice for beginners – those who are transitioning from simple point-and-shoot devices and want to take the plunge to a DSLR, without too much expense. It is affordable compared to other DSLR cameras. Moreover, you can pick up a refurbished model for next to nothing. For beginners, yes, the Sony a350 is a viable option. For intermediate to professional usage, we advise choosing something else.

7
Score
The Sony a350 remains a decent beginner DSLR for those starting out in the world of photography. Its CCD Sensor provides 14.2MP image resolution and its basic photo quality is fine. Moreover, the Sony a350 has a plethora of useful features that extend its functionality. If you want a basic, affordable camera that allows you to get used to using a DSLR, this could be a great choice.