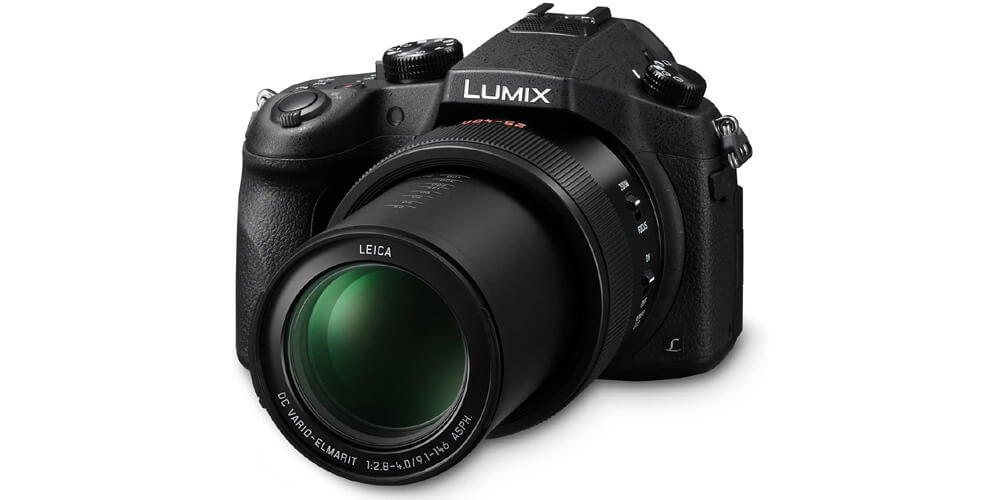 All of the newly released top-end cameras from Panasonic have the ability to record 4K videos and it first started with the Panasonic LUMIX DMC-GH4. Similarly, it continued with the launch of the more mainstream Panasonic LUMIX DMC-FZ1000. It’s understandable as the company has also been actively involved in the production of the big-screen TVs and it seems a nice way to enable people to get the most out of those TVs at the stage where 4K has become a preferred choice for most of us.

When it comes to the Panasonic’s fixed-lens LUMIX-series cameras, the LUMIX DMC-FZ1000 is top. Featuring a 20-megapixel sensor and a lens with a zoom range of 24-400mm, this super-zoom model gives you a greater reach to the subject. The camera is a solid all-round performer and can be ideal for a range of photography options such as landscapes, close-up shots, macro photography, and more. Besides that, it captures excellent Full HD and 4K videos.

Depending on your skills and requirements, the camera offers auto, semi-manual and full manual modes, and it includes all the required essentials in its body for a joyful photography experience such as an EVF, a hinged LCD monitor, and a flash.

With a bulky design and size similar to an entry-level camera, the Panasonic LUMIX DMC-FZ1000 is larger than most of the bridge camera models. That is, if your utmost requirement is portability, this isn’t the camera you want.

However, the camera has good handling as its big, chunky grip gives you a nice hold on it and, even with a weight of 831g, it doesn’t feel heavy in the hand. Unlike its more solid rival, the Sony RX10, the FZ1000 is built with plastic, but it feels quite sturdy.

The Panasonic LUMIX DMC-FZ1000 brings along a variety of physical controls. Although you won’t find any dials needed for core shooting parameters, five function buttons are provided to customize your desired settings like ISO, exposure compensation, aperture, and so on. Initially, the camera needs a bit of an effort to get used to its controls.

The headline feature is the 20-megapixel one-inch sensor, which is significantly larger than the little 1/2.3-inch sensors in most models. Having a sensor not powerful enough generally is the reason why bridge cameras don’t appeal to the photographers, but that’s not the case here with the Panasonic LUMIX DMC-FZ1000.

Although this isn’t an APS-C sensor, it’s still a big step up that separates the FZ1000 from other bridge cameras. Also, the addition of a one-inch sensor makes it a direct competitor to Sony’s widely popular RX10.

On the other hand, a fixed f/2.8 aperture of the Panasonic FZ200 and Sony RX10 gives them an edge over the variable f/2.8-4.0 aperture of the FZ1000, which results in losing the lens speed when you are not shooting wide open. Inclusion of the five-axis stabilization in the FZ1000, however, makes most of that zoom range usable without using any tripod.

Talking of the camera’s rear monitor, it’s a three-inch, 921k-dot vari-angle display, which lacks a touchscreen but those physical controls on the body help fill the void.

The camera has been equipped with an excellent electronic viewfinder, having a 2.36-million-dot OLED display. It’s the same EVF used in the Panasonic GH4 – a top-end Micro Four Thirds camera. The view through the EVF is bright and clear and it offers 100 percent frame coverage. A rubber ring surrounds the viewfinder and makes it easy to use.

The Panasonic DMC-FZ1000 offers multiple connectivity options that help photographers to transfer the images from the camera to a mobile phone or tablet. These include a Wi-Fi and an NFC on-board. Using the Panasonic Image App, you can also control the FZ1000 remotely.

The Panasonic LUMIX DMC-FZ1000 in Use

The multi-metering system of the Panasonic LUMIX DMC-FZ1000 is as good as the excellent metering systems found on the Panasonic’s G-series compact cameras. It’s been designed to deliver perfect exposures in a variety of scenarios. In fact, the FZ1000 produces well-exposed subjects where some of the other cameras struggle. For instance, it will deliver images with correctly exposed foregrounds under an overly bright sky.

Furthermore, you will notice that the bright sky isn’t burned out in many situations and the camera still manages to retain some tonal variation, thanks to its broad dynamic range.

In some situations where high contrast subjects make it challenging to shoot, the iDynamic system of the FZ1000 comes in handy. It helps boost the dynamic range and makes the areas visible under the shadows and highlights. Likewise, JPEGs produced by this camera are beautiful and natural-looking as well.

In the default ‘Standard’ Photo Style, you get excellent color images straight out of the camera. In order to add more vibrancy, you can use ‘Vivid’ Photo Style. Similarly, you can apply the ‘Scenery’ Photo Style to make the landscapes look even better.

The auto-white balancing (AWB) system of the FZ1000 solidly performs in most natural lighting conditions. It also manages well to retain some of the shooting atmospheres around. While AWB setting is active, you get excellent shots in bright sunlight compared to those taken with Sunny white balance setting ‘on’. However, Sunny white balance is preferable in shades as it adds more warmth to the results.

At 100 percent, however, some stipple textures of very minor sizes start appearing even at ISO125. Eventually, they become more visible at 100 percent as the sensitivity rises. At high ISOs such as ISO 6400, luminance noise is expected but images at normal view settings still look quite good with a significant level of detail. Overall, the FZ1000 efficiently preserves the detail and reduces the noise at almost all ISO levels.

Unlike many bridge camera systems, the Panasonic LUMIX DMC-FZ1000 allows you to process RAW files directly on the camera, meaning you don’t have to do so on your desktop or computer. So you get another flexible option with this camera.

And lastly, the FZ1000 delivers very impressive autofocus performance in all lighting conditions. With a fast autofocusing system and burst rate, it can keep the subjects in-focus as they move towards the camera. The camera does it quite nicely when you use AF-C or AF-F focus modes.

However, the AF Tracking feature works only for fairly slow-moving subjects, making the camera useless for sports or action shots.

How Does the Panasonic LUMIX DMC-FZ1000 Compare?

The LUMIX DMC-FZ1000’s only real rival on the market is Sony’s RX10, which also offers a flexible zoom range, high-quality images, and videos in a single package. We compare them to understand more about their features.

With the launch of the Panasonic LUMIX DMC-FZ1000, a new breed of bridge camera systems was introduced, that features bigger sensors in order to produce better quality stills, especially when it comes to shooting at higher ISO sensitivities. Additionally, it offers nice handling, great design, and excellent AF performance.

However, things get a little trickier when you compare the FZ1000 with its direct competitor, the Sony RX10, where the former comes with a more versatile zoom reach while the latter with the constant maximum aperture.

Certainly, if you want a camera that adds an excellent 4K video capture to its other amazing set of features, that’s clearly a win-win for the Panasonic LUMIX DMC-FZ1000.

9
Score
If you can handle the Panasonic LUMIX DMC-FZ1000’s chunky body, it’s more than capable bridge camera with a bigger sensor, reliable AF system, and excellent stills and video quality.