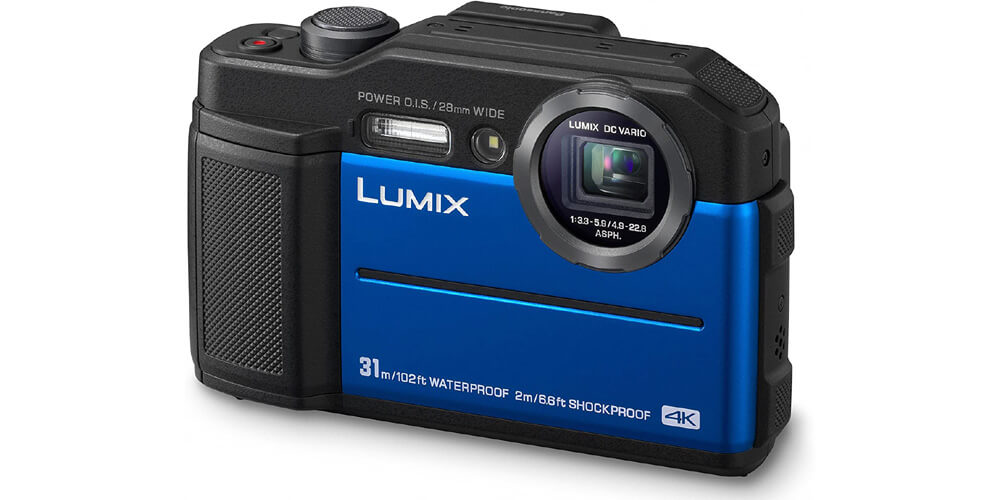 Over the past few years, Panasonic has added a lot of new innovative features into its point-and-shoot cameras, including the TS series – a rugged and waterproof camera line. In the TS series, the Panasonic LUMIX DC-TS7 (also known as the DC-FT7) is the latest rugged camera that comes with a number of solid attributes, making it suitable for shooting in a variety of conditions.

An electronic viewfinder has also been added to the new Panasonic LUMIX DC-TS7, which its predecessor, the LUMIX DMC-TS5, lacked. This 1170k-dot, 0.2-inch EVF allows you to shoot in broad daylight when you are unable to use the camera’s 1,040k-dot, 3-inch screen.

Other highlighted features you get with the LUMIX DC-TS7 include 4K photo and video modes, geo-tagging, digital filters, and a Wi-Fi connectivity option. Additionally, a raft of useful features such as an altimeter, a compass, and a torchlight have been added that help a lot when on a photo trek.

The Panasonic LUMIX DC-TS7 looks like its predecessor and comes with a bit more of an industrial-style design. Weighing in at 319g, it’s 105g heavier than its outgoing model, with a taller, longer, and bulkier body than before.

Although the camera has somewhat bulkier proportions, it’s still quite compact. It takes up little space and will easily slip into a small pocket of your bag. You won’t feel like size is an issue while traveling or hiking. The camera is available in blue, black, and orange versions.

The front panel of the LUMIX DC-TS7 is now relatively large, meaning it may get some scratches if subjected to some abuse. On the other hand, its larger size has also enabled the company to refine the control elements, and as a result, the camera’s buttons are now quite sensibly placed.

While it’s not easy to design a camera with buttons that can be easily handled underwater or when wearing some neoprene gloves, Panasonic has done quite a nice job here. Under these scenarios, you can use the camera without any hassle. It’s larger, top-positioned shutter button also makes the camera easy to operate whether you’re wearing gloves or not.

The Panasonic LUMIX DC-TS7 in Use

As mentioned, the new Panasonic LUMIX DC-TS7 employs a 20.4MP sensor, increasing the pixel count from 16.1MP of the older TS5 / FT5. The native ISO of the 1/2.3-inch MOS sensor ranges from 80 to 3200, which can be stretched to ISO 6400. Furthermore, the TS7 also offers an Auto ISO functionality.

The camera can achieve a mechanical shutter speed of 1/1,300s and go up to 1/16,000s with its electronic shutter. It supports the longest exposure of only four seconds.

Speaking of the autofocus performance, the Panasonic LUMIX DC-TS7 makes use of a contrast-detect AF focusing system. Unfortunately, the autofocus speed cannot be calculated together with the shutter release delay. The TS7 measures the focus using a total of 49 measuring fields. Certainly, you can reduce the number of fields.

Moreover, the camera is equipped with face detection AF and a user-defined AF tracking system. The latter allows you to use a small crosshair to select the subject where you want to focus on. If the subject moves, the crosshairs will also move along with it. The camera’s continuous autofocus system works while shooting at up to five frames per second.

With this camera, you get a top burst speed of up to 10 fps for full-resolution JPEG images. As for video capture, the LUMIX DC-TS7 is capable of shooting 4K videos at up to 30fps. As with many recent Panasonic cameras, Panasonic’s 4K Photo technology is also available, which allows you to capture 8MP still images at up to 30 fps. And interestingly, it includes post focus functionality.

As for image quality, although Panasonic has used a densely populated 20.4MP resolution on a relatively smaller sensor, the detail is a bit disappointing as you zoom in on an image. The imaging sensor appears to reduce the noise but at the cost of the detail in the images. At low ISO settings, you get a decent amount of detail; however, as you start increasing sensitivity, you lose noticeable detail.

While its closest rival, the Olympus Tough TG-5, offers RAW image capture, the TS7 only offers JPEG capture, which is quite disappointing as well. The camera’s ability to capture RAW files can be helpful in a number of scenarios. For instance, you can use it to resolve the detail or correct the white balance of underwater scenes where a shadow can easily trick your camera.

However, you get images with beautiful and vivid colors, and with a great Auto White Balance. Similarly, the metering system of the camera works well and delivers consistent images.

Finally, the battery performance of the Panasonic LUMIX DC-TS7 has dropped down to 300 shots from the 370 shots of the TS5, and it further drops to only 250 shots if you are using the electronic viewfinder.

How Does the Panasonic LUMIX DC-TS7 Compare?

The Panasonic LUMIX DC-TS7 has been equipped with many unique features and tough credentials. Its electronic viewfinder is another welcome addition.

However, some shortcomings such as mediocre image quality and absence of RAW capture keep it from effectively competing against its rivals like the Nikon COOLPIX W300 and the Olympus Tough TG-5. On the other hand, if you need an easy-to-use camera with rugged credentials in rough environments, then the Panasonic LUMIX DC-TS7 is an ideal choice.

The best thing about this camera is that it allows you to go as deep as 31 meters, which should be more than enough for most of your underwater photography needs. Read our guide on the best underwater cameras to see some other great options.

7
Score
Although the Panasonic LUMIX DC-TS7 can go as deep as 31 meters underwater and features an electronic viewfinder, it still has to offer a lot more in order to rise to the level of competing cameras.