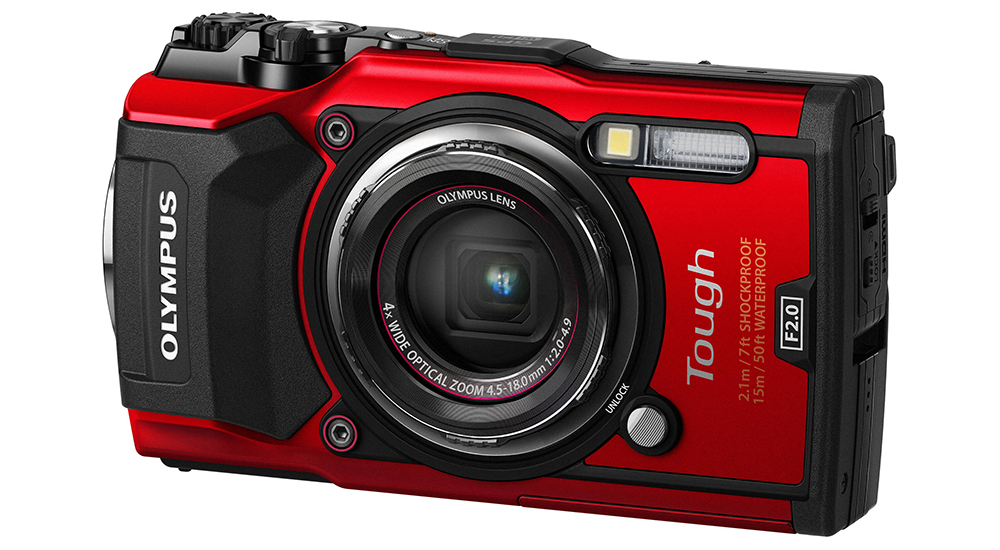 The Olympus Tough TG-5 is the fifth generation in this series from Olympus. With constant improvement with each iteration, this camera sets that standard high within the waterproof category.

Do not let the simple design and lens from its previous models fool you. With the Olympus Tough TG-5, the performance level will please many with its 4K video quality and 20fps RAW shooting. Although the TG-5 doesn’t have the same qualities a DSLR camera has, other action cameras do not compare.

Even though the price went up in comparison to the TG-4, it is a camera that won’t disappoint. It also can be classified as the best rugged camera. If you don’t believe it, keep on reading.

You can get the Olympus Tough TG-5 in either red or black and looking at it, it will look just like the TG-4 with minor physical changes. You will also notice the lens being at the center of the body which is different from other tough cameras that place the lens in the corner. This makes it easier for the consumer to mount any accessories like lenses and flashes.

Since the TG-5 is known as a “tough” camera, Olympus rates that it can go 50 feet underwater, survive seven-foot drops, withstand 220 foot-pounds of pressure, and function in temperatures that drop to 14 degrees Fahrenheit.

The Olympus Tough TG-5 has a speed that immediately focuses when turned on and takes a picture in around 10 seconds. For its size, this is an impressive quality and essential if you are looking to capture action shots.

Aside from its fast speed in focusing, it also takes pictures quickly at 19.5fps although this is only for short bursts. There is also Pro Capture which takes a certain number of frames while you hold the shutter down halfway.

You also have the option to shoot in RAW but you will get sharper images at a high ISO. This will increase the noise in the pictures.

With ISO 1600, you are able to see some grain but if you don’t mind the grainy look then ISO 3200 shouldn’t be an issue. At ISO 6400, you are pushing the image quality as it begins to look a little rough but details can still be seen. The camera does have an optical stabilization which helps with keeping the recording steady.

As for video resolution, the 4K turned many heads as it is uncommon with compact cameras. With its strong and crip details shooting with a 75Mbps bit rate, there are some setbacks.

While shooting in 4K, you are limited to shooting at 30fps and the frame is cropped so be aware of what you want to capture. Also, when zooming in and out, it is heard throughout the footage but it isn’t distracting.

As for lenses, Olympus has a fisheye and telephoto conversion lenses that you can purchase along with a ring light that controls the camera’s LED and Xenon flash. But in regards to the lens, it definitely is different from its competitors. It has a wide aperture structure, similar to a 25mm full-frame lens, with an f/2 aperture.

The Olympus Tough TG-5 has a 4x zoom which is equivalent to the 100mm lens with a maximum f/4.9 aperture. The camera is praised for its visual qualities but when it comes to dim environments, it falls weak. So remember to zoom out when shooting in darker spaces to try to capture as much light with the f/2 aperture.

When it comes to shooting up close, the macro capability will blow you away. You can turn on the macro setting which will enable the Microscope mode. What this will do is zoom the lens a bit as it tightens the field of view which maximizes the aperture to f/2.3.

How Does the Olympus Tough TG-5 Compare?

The Olympus Tough TG-5 costs more than the previous model, which has stopped being produced, but with that extra money comes more features. There is the 12MP image sensor that allows you to work better in low-light, even if it means compromising the resolution a bit. The TG-5 also shoots very fast, even in RAW. And of course, the 4K video footage that is rare in compact cameras.

In addition to all the extra features, it is a tough camera that comes with a bright f/2 lens. The price point might make you second guess your decision but the OlympusTough TG-5 is an affordable waterproof camera that is unique among its competitors. You can take the camera anywhere and not be disappointed in the outcome of your footage whether it be images or videos.

9
Score
The Olympus TG-5 has stood out from many other action cameras due to its many features. The compact camera has qualities that can be seen in a DSLR camera which is one of the reasons why it has turned heads. But at a higher price point, it has people questioning if it's worth the purchase.