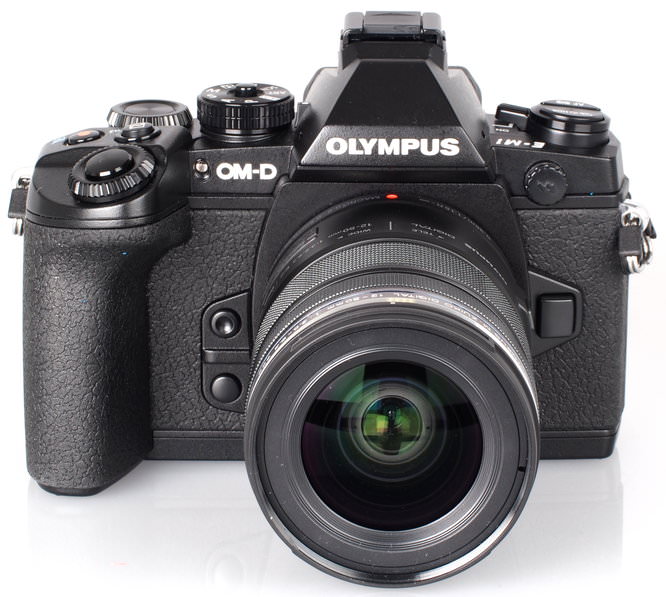 As the second model in Olympus’ OM-D series, the Olympus OM-D E-M1 raises the bar when it comes to technicalities. It was created for professionals and camera enthusiasts as you will end up spending some time going through all the settings the camera has to offer.

The OM-D E-M1 is filled with many features and it is great to take on many trips as it has a weather-sealed body. Regardless of where you take it, you can count on high-quality photos and videography.

It is one of the fastest Olympus cameras you can invest in for a reasonable price, but the pricing is still is a bit high in comparison to its competitors. Here is where your money will be going when you buy the OM-D E-M1.

The OM-D E-M1 has the classic Olympus structure that many of its cameras have. There is an old-school look to it but the main difference it the hand grip and the number of buttons and direct controls. The grip looks like one that many DSLRs have, allowing you to hold it safely with one hand. It also allows better spacing between the front and rear control dials.

The OM-D E-M1 definitely feels more comfortable and easier to control. Even with the bulkier grip, the camera is made of magnesium alloy so it is still pretty light. Not only is it light, but it’s quite small compared to DSLR cameras. The body is also dust, splash, and freezeproof but it is still recommended to use a weather-sealed lens.

When looking at the top of the camera, you will notice many buttons, but that tends to be a common trait in the OM- D series. Here are the buttons that give you access to various modes, the focus setting, the On/Off switch, and the E-M1’s new feature, in-camera generation range composition.

One button allows access to the majority of the image features and in true Olympus fashion, you will have the ability to customize the button configurations.

There is a tilting touchscreen that is seen on the E-P5 model. It goes 80 degrees upward, 50 degrees downward, and can be pulled out to the left. Once you pull out the screen, the electric viewfinder becomes disabled which is a great upgrade. Some of the older models used to switch to EVF as the camera moved closer to the body.

The Olympus OM-D E-M1 in Use

The moment you turn on the OM-D E-M1, it will focus and shoot in under 0.8 seconds. If you are shooting with flash, the timing goes up to 1.7 seconds. During autofocusing, the camera detects the subject impressively with a Micro Four Thirds lens but once you move into dimmer lighting, the system becomes challenged and moves a bit slower. Nonetheless, it still produces impressive images.

The OM-D E-M1 shoots a maximum of 10 frames per second continuously during H mode. In L mode. the camera shoots up to 6.5 frames per second. The difference between both modes is during L mode, the camera keeps a live view feed and can refocus with each frame. Therefore, this mode is best used for moving subjects. In H mode, the focus is fixed on the subject, and instead of showing you a live view feed in each frame, it shows you the image recently captured.

Aside from timing, the OM-D E-M1 can take some time to get used to. There is not a lot of direct access, so you will need to customize and learn the camera as disabling some settings prevents you from accessing others. For example: without the 2×2 lever’s effect, you can’t use flash mode. It can be tedious to deal with.

The Olympus OM-D E-M1 is marketed to be a customizable camera but it doesn’t fit the description as much it claims. If the default settings are not your style, it can still be managed to your liking. Regardless, it offers a fair list of options so you can control exactly how you want your camera to function.

With an 18 month difference, the Olympus OM-D E-M1 was released first in October 2013 while the Sony a6000 was introduced in April 2014. Since the time frame between the mirrorless cameras is not extensive, the difference in technology is not drastic. But Sony has consistently produced top-notch technology and has made a strong presence in the camera industry, so this small time frame gives the Sony a6000 some advantage to the OM-D E-M1.

As mentioned, the Olympus OM-D E-M1 was the second camera to be released in Olympus’ OM-D series. The first model, the E-M5, set the standard high for the entire camera industry. It combined the best Four Thirds sensor in a control dial body that made it a powerful mirrorless camera.

With all the revelation that the camera made, it was a bit hard for the OM-D E-M1 to live up and pass the expectations. Along with that, Olympus made the Olympus OM-D E-M1 the success for the semi-pro DSLRs. With that this pressure, the camera happened to live up to what it claimed to be.

8
Score
Taking on high expectations due to the first model of Olympus' OM-D series, the E-M1 does not fail to live up to the standards. Olympus took all the tools from the previous model and was still able to rattle the camera industry with such a durable and dependable compact camera system.