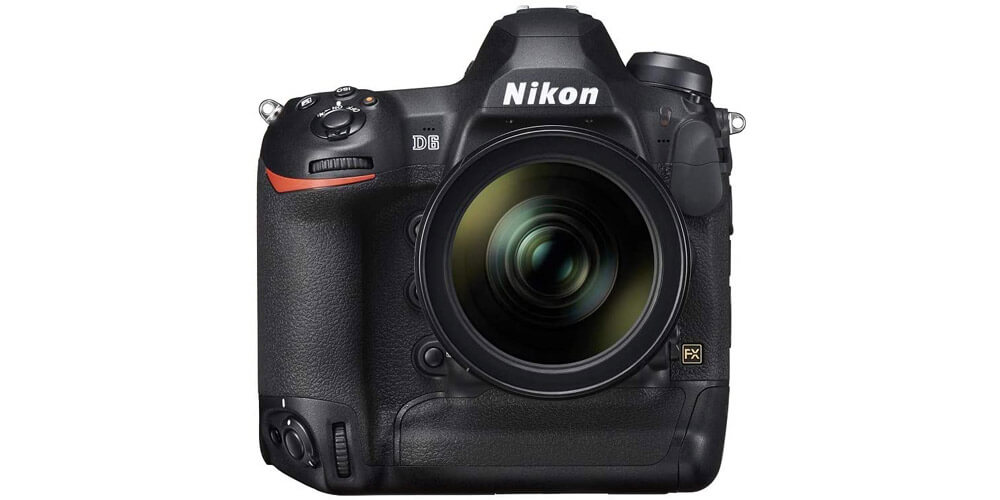 Nikon finally released the much-awaited D6 in May 2020 after announcing its proposed arrival in November last year. This top top-of-the-line camera takes the legacy of Nikon’s D series further and gives tough competition to its rival, the Canon EOS 1D X Mark III.

The Nikon D6 appeals to passionate amateurs and professionals who don’t want to compromise the autofocusing speed, battery life, and image quality in all conditions, even if it means paying a hefty price and handling a burly camera.

On closer inspection, let’s see how the D6 unfolds and whether it lives up to the hype.

It should come as no surprise that the Nikon D6’s physical appearance resembles closely to that of the D5. It’s good news if you are upgrading from the Nikon D5 as you get improved performance with the same handling and familiarity.

The Nikon D6 feels robust and lies almost perfectly in hand, even in portrait orientation, thanks to the built-in vertical grip. The body, which consists largely of magnesium alloy, alone weighs nearly 1.4kg. Together with the Nikon AF-S 24-70mm f/2.8E ED VR lens, it bulks up to 2.5kg.

The large EN-EL18c battery is housed in the vertical grip and is capable of shooting up to 3,580 photos per charge. Only one battery comes with the camera, but the charger has space for two batteries for simultaneous charging. Even with one battery, the D6 far outperforms its mirrorless rivals.

The Nikon D6’s 0.72x optical viewfinder with OLED elements and the 3.2-inch touchscreen with over two million pixels enable razor-sharp subject control in real-time over a large field of view. Navigating through the buttons in dark has now become easier thanks to the option to illuminate the buttons.

Like the Canon EOS-1D X Mark III and Sony a9 II, Nikon has also worked on connectivity. The connectivity options for the D6 include a USB-C port, Bluetooth, and WiFi. For the professionals, however, these are usually too slow.

For a larger volume of data, the D6 has an ethernet port for wired high-speed transfer. The double memory card slots support XQD and CFexpress cards, which are two of the fastest cards on the market.

The Nikon D6 in Use

The heart of the Nikon D6 is the 20.8MP full-frame sensor. This is a lower resolution than the Nikon D5, but it’s slightly higher than the Canon 1DX Mark III’s 20.1MP.

Regardless of a relatively lower resolution, Nikon designed the new sensor for a frame rate of up to 14 fps. You can also opt for 30 fps with a reduced resolution of 8MP or even 60 fps with a limited 2MP resolution. This burst speed is made possible by the brand new Expeed 6 engine.

You will notice that the D6 manages noise very effectively over an ISO range of 100 to 102,400, expandable from 50 to 3,280,000. This is not an improvement from the D5, but Nikon says it has revamped the image processing to render cleaner JPEGs.

Nikon has also reduced the number of AF points from 153 to 105, but now all cross-type sensors are evenly distributed in three zones with 35 measuring points each.

The Expeed 6 image processor, which is also equipped in the Z series and the D780, enables improved AF algorithms. In combination with the exposure sensor, which has a resolution of 180,000 RGB pixels, the viewfinder autofocus not only recognizes faces but also eyes, albeit not as well as in live view.

In general, even low ambient light is enough for the D6 to autofocus; it finds its target at -4.5 EV. Within a twelfth to eighth of a second, the D6 with the 24-70 2.8E VR focuses from infinity to two meters. This makes the D6 one of the fastest DSLRs in terms of autofocus.

Despite the lack of hybrid autofocus, which many DSLRs and mirrorless system cameras now offer, it also focuses surprisingly quickly in live view.

The D6 supports video recordings like the D5 in 4K with up to 30 frames per second. In full HD, you can shoot smoother movements with twice the frame rate. Despite looking excellent in numbers, the camera is geared mainly for photography, and this reflects in its operation and performance.

How Does the Nikon D6 Compare?

Externally, you can hardly distinguish the D6 from its predecessor, the D5. When you look closely, you will notice that the viewfinder mount is a few millimeters higher due to the newly integrated GPS mode. Internally, you will find improvements in image quality, color reproduction, autofocusing, frame rate, and connectivity.

Essentially, the Canon 1D X Mark III is D6’s closest competitor. Nikon and Canon seem to have struck the right balance between resolution and sensor size on their top models, prioritizing sensitivity over pixel racing.

Both flagship cameras were released in early 2020 and appeal to a niche segment of sports and nature photographers. They are neck to neck in ergonomics, censors, and price. However, the 1D X Mark III marginally outperforms the D6 in overall performance, especially in continuous shooting speed, video quality, and autofocusing in live view.

The Nikon D6 is the flagship full-frame DSLR specially designed for sports, action, and wildlife photographers. Being a bulky, heavy, and expensive camera, the Nikon D6 is not for everyone. But it does meet the expectations and justifies why it is one of Nikon’s best.

The D6 offers Nikon’s most powerful AF system to date and an integrated network connection for real-time image transmission. The camera not only shoots sharp photos, but it also tracks the sharpness precisely. You can shoot 4K videos like the D6’s contemporaries but you’ll miss functions such as RAW videos and recordings in the log format.

8
Score
The Nikon D6 is the further development of the tried and tested D5 and combines excellent image quality with blazing speed. Though it falls slightly short of Canon 1D Mark III's performance, it's likely to appeal to long-time Nikon users.

One Reply to “Nikon D6: A Powerful High-End DSLR”