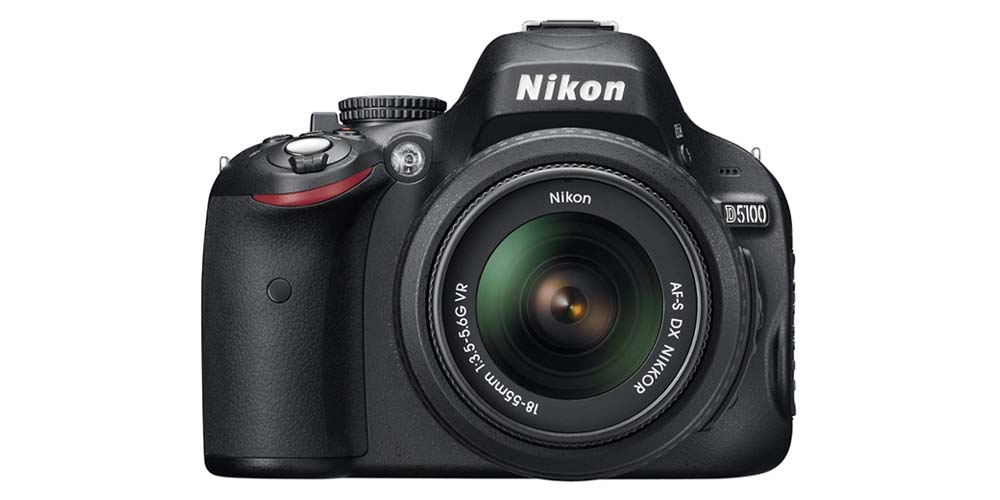 The Nikon D5100 comes with significant upgrades over its predecessor, the Nikon D5000. The feature set that it offers along with its pricing shows that it can easily sit between the beginner-friendly D3100 and the high-end D7000.

The D5100 is presented as an upper-entry-level DSLR and is clearly aimed at enthusiast photographers. It features the same remarkable sensor as the D7000 and has a larger and more enhanced swivel LCD screen. The camera also comes with some reduced weight which makes it lighter and more compact than the D5000.

The Nikon D5100 employs the same 16.2-megapixel, DX-format CMOS sensor found in the D7000, which represents a considerable upgrade over the 12-megapixel sensor used in the D5000. It uses the Nikon’s EXPEED 2 image processor which was first seen in the D3100 and then in the D7000.

Nikon’s D5100 is mostly made of plastic which is very tough and can easily withstand harsh treatment. If you accidently bump the camera body against rough surfaces a few times, it won’t get damages.

However, the LCD should be a concern and you need to take some extra care for its protection. It is recommended to use a screen protector. A good screen protector will cost you less than $10. The D5100 is not weather sealed like higher-end DSLRs, so it needs to be used carefully when photographing in dusty or rainy environments.

The new three-inch LCD screen on the D5100 simply looks beautiful. Sometimes it feels a little deceiving because the images on the LCD just look too good.

There are massive design changes on the rear of the camera and the buttons are differently placed than on the previous model. The LCD screen base has taken the space of the traditionally placed playback and menu buttons. A new lever on the top of the camera has replaced the Live View button, which is a good change because now it has eliminated the possibility to accidentally trigger the live view button.

The play and magnification buttons are now moved close to the 4-way controller on the right side of the camera, and the menu and delete buttons have swapped places. The ‘i’ button, which used to sit to the left of the LCD screen on the rear of the D5000 has moved too, and joins the AE-L/AF-L button on the top right of the camera, alongside the control dial.

The balance of the camera is quite well if light lenses such as the kit Nikon 18-55mm f/3.5-5.6G VR and Nikon 35mm f/1.8G prime lens are used, but the scenario can be different if the lenses are much heavier than the camera body. Despite being of small size, the overall feel of the camera in hand is quite nice.

The new design has made it quite simple to access and change autofocus modes, white balance, ISO, metering modes, and other settings that are most frequently used. A conveniently located “Information” button on top of the camera, next to the “AE-L/AF-L” button, is used for this purpose. Now, there is no need to dig through the camera modes to change these settings.

The “Information” button enables you to make quick changes and especially for the beginners, it’s very easy to operate the camera with this button as it lets you comfortably access most of the camera settings.

Nikon’s DSLRs lack an internal AF motor, so their autofocus speed depends on the lens. This means that the 18-55mm kit zoom isn’t much faster here but it can satisfy the needs of most users.

It is to be noted that the D5100 focuses more slowly in Live View mode, like all DSLRs, but Nikon deserves high praise for significantly improving the focus speed in live view. Although the D5100 can’t match the likes of the Panasonic’s GH2 for contrast-detection AF speed, it is still faster than the focus systems on the Canon EOS 1100D and 600D.

In daylight shooting, autofocus performance is fast and accurate. There are three available AF modes; AF-S, AF-C and AF-A, and they work well. For single focus and low-light scenarios, AF-S is good; AF-C tracks moving subjects and AF-A is helpful for many other photography needs.

In low light conditions, the camera certainly suffers when focusing, especially when using outer focus points, which seems normal. In this case, you can switch to AF-S mode, which turns on the AF assist lamp on the front of the camera to illuminate the subject.

The Nikon D5100 produces images of outstanding quality. At ISO 100-1600, it delivers noise-free images. The results also look good at ISO 3200 but you will observe a little noise at ISO 6400. However, at ISO 12800 and 25600 images get a lot noisier and suffer from the softening of fine detail, but still they are quite usable for small prints and resizing for web use.

As said earlier, the Nikon D5100 has a lot of improvements over its predecessor. It has reduced weight, a compact body, a relatively large sensor, and improved autofocus system. Their comparison in more details is in the chart below.

The Nikon D5100 provides several notable improvements over the D5000 making it a far more attractive package than its predecessor. It’s lightweight, has a compact body, and it’s also easy to use. It offers solid performance and is capable of delivering consistently good results, in both stills and videos.

In addition to the excellent imaging sensor, the tilting and folding LCD screen is also a great feature added to the D5100. It gives you a lot of creative possibilities for both stills and videos.

Full 1080p HD footage is another fantastic feature on this relatively inexpensive DSLR, although full-time auto-focusing in Live View mode is still a slow experience and not well-suited to fast-moving subjects. The camera still does better in this department than many similar DSLRs and is a good choice for a beginning DSLR camera.

8
Score
The Nikon D5100 remains a great camera to use overall. It’s capable of delivering great quality images and videos. If you’re looking for an advanced entry-level DSLR, then be sure to add it to your shortlist.