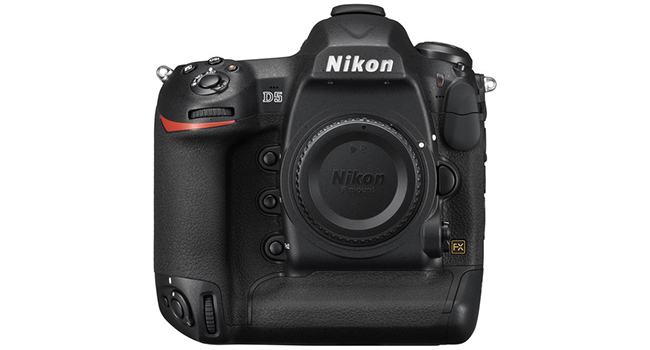 In 2016, Nikon released its highly anticipated, top-of-the-line flagship DSLR, the Nikon D5. Boasting a 20.8MP full-frame sensor, Expeed 5 processor, and 153–point autofocus system, it’s better than its predecessor, the D4S, with the whole unit built for the working photographer who wants a robust body that can work at high speed all the time.

There are clearly going to be comparisons with the D4S, especially since it’s priced the same, and comparisons to the Canon EOS 1D-X II, but more than likely it’s going to be existing Nikon users who are going to dive into this camera. Once you have the buttons set up as you want, the Nikon D5 DSLR should be your new workhorse, as it is one of the best full-frame DSLR cameras out there.

As you would expect from a top-line Nikon, the body is extremely solid and robust and able to handle all conditions. It’s definitely the heavyweight of the line at 1405 grams, but not so much that it’s uncomfortable. A full side and bottom grip means you don’t feel the weight so much as the camera is very well-balanced. There are plenty of buttons at your disposal, all there to fully customize exactly as you want them for your most commonly used features.

The bottom line is that the D5 is built for the working photographer, with loads of customizable features. This camera won’t let you down when it comes to build quality and the ease of access to its many features.

Ultra–fast is the best word to describe the D5. You can shoot 12 fps with RAW and JPEG or 14fps with the mirror locked. You can get up to 95 shots for nearly eight seconds with a 200 shot limit and you can get up to 30 frames per second silent shots in Live View.

Nikon is renowned for its low-light capabilities, which means an ISO of three million should be a benefit to anybody. The noise levels are slightly lower than the D4S, still the best on the market, but usable ranges will always give the best results. In extreme darkness, you can use the live view to manually focus if you’re using the extremes of ISO. The D5’s dynamic range may not be as good as its competitors, but it’s high ISO capabilities, leading autofocus, and ruggedness will be its main selling points.

The JPEG engine has quite aggressive noise reduction, but with some of the best color ranges of the competition. There is large radius sharpening, even at high ISO levels, and, although there is a slight loss of detail at such high levels, the color range more than makes up for it. Default JPEG settings in low light with Active D-Lighting enabled is very close to raw format. The noise reduction will also leave images a little soft. Maybe too soft for a huge building-sized print, but totally acceptable for everything else.

The other benefit of the D5 is 4K video capability with a maximum bit rate of 144mbps. This is with an additional crop factor, but at least 1080p at 60fps can be done without any crop. You can make use of the D5’s low-light capabilities in all its video modes, but the takeaway is that if you want to do some serious video shooting, there are other cameras more capable.

One nice upgrade feature is a touchscreen on the Nikon D5 DSLR. More common at the consumer level, the touchscreen allows easy access to images – always a bonus. It’s also something you can turn off in the menu if you don’t like the feature. There are three new buttons on the front of the camera, Fn1, Pv, and Fn2, which can be easily configured to your liking.

With so many buttons, Nikon rearranged the order of some, which may take some getting used to for existing users. The ‘Mode’ button has moved to the left of the camera, replaced with the ISO button. Where the ISO button used to be, there is now a ‘Continuous Shooting’ button to set the continuous high and low shooting speeds.

One minor gripe is that WiFi is not included. You have to use the expensive WT-5A wireless transmitter. At least USB 2.0 has been bumped up to USB 3.0. A top-end camera should always have the features of their lower siblings, but this isn’t always the case.

The Nikon D5 DSLR will will feel familiar to a D4S user, with the addition of more customization via a graphical interface and a touchscreen. The ability to swipe through images on the touchscreen and zoom with your fingers à la a smartphone is a plus. You can even scrub through multiple images by dragging across the screen. It’s also handy in live view where you can move focus points.

The function buttons now allow you to change the AF Area mode and new area mode. AF modes can be quickly changed with a few button presses, different preset focus points can be assigned according to shooting orientation. All of these buttons are there to quickly access features instead of diving into menus. The eight-way controller is still useful, you just have to be a bit nimble with its use. Also, having all these bottoms backlit is a bonus in low light.

Battery life is impressive, with 3,780 shots depending on the mode you shoot but this should be plenty for most purposes. This should easily handle all-day shooting but, like any camera, backups, and spares should always be on hand.

How Does the Nikon D5 Compare?

The obvious comparisons are going to be with the D4S and Canon 1D-X II. There’s going to be a little learning curve for those who already own the D4S, but it won’t be too unfamiliar. Increased battery life, a better sensor, and updated autofocus may prove a good upgrade. If you want a camera that operates extremely well in very low light, then it definitely beats the Canon. But, it’s really existing Nikon owners that will be looking at this model and it is a fantastic performer.

This camera, with a massive continuous burst, will be excellent for any moving images. It’s not without its faults, but for things like action, sports or weddings it’s going to be a fine tool, handling nearly all situations. It’s also priced the same as the previous model, the D4S.

You can learn more about shooting in extreme low light and the best cameras for night photography by reading our buying guide.

9
Score
The Nikon D5’s full-frame sensor with fast auto focusing and continuous shooting in low light is definitely going to win over most pros who have already invested in Nikon lenses. You have lots of customization options and the ability to focus fast.