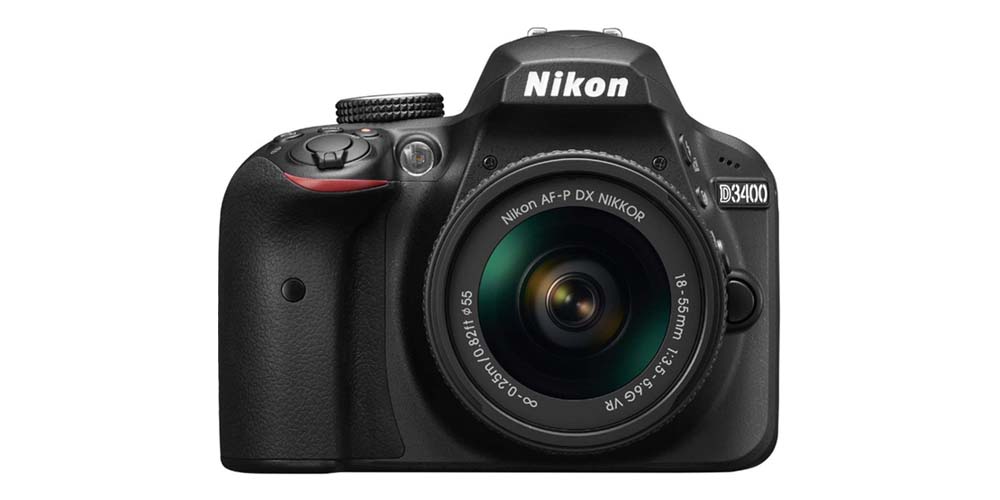 The Nikon D3400 is one of the most popular DSLRs for first-time shooters. It’s very simple to use and small enough that you can take it anywhere. It offers excellent control over things like exposure and focus and can be used with many of the great Nikon lenses.

The D3400 is a very modestly updated version of the D3300, which was also a fine entry-level DSLR. So, what has changed in the new D3400? Well, there seem to be no big improvements made to the new model; however, the battery life of the D3400 is considerably higher (a less powerful flash can be the reason), it weighs less and offers an instant photo sharing option with its SnapBridge feature, which works using the new built-in Bluetooth LE.

The D3400 has improved performance in live view and video because of the new ‘AF-P’ version of the 18-55mm VR lens, which comes with the camera and features a new focus motor. Now, let’s find out more about the design and capabilities of Nikon’s new state-of-the-art DSLR.

The Nikon D3400 features the same 24MP APS-C CMOS sensor as the D3300 along with an EXPEED 4 image processor and full HD video capture. It has an ISO range of 100-25600, an 11-point autofocus system, and a continuous shooting speed of five frames per second. The camera’s user interface is quite friendly and clearly aimed at beginners.

The LCD, meanwhile, measures three inches in size and has a decent 921k dots resolution. However, it lacks touchscreen technology and, like many other cameras of its kind, you won’t be able to physically adjust it to face different angles.

The D3400 is designed to be small and lightweight. Sensor-based image stabilization and weather-sealing (it can handle a small amount of rain or sand without a problem), are both missing here. Perhaps, Nikon has decided not to add these two key features just to reduce the weight.

Such a small and light body does have its downsides as mounting even the smallest of Nikon lenses can make it difficult to hold the camera properly while taking the shot. The overall feel and build quality of the camera is not impressive but this is expected to a degree in entry-level DSLRs with such a low price tag.

Despite having the downsides above, the D3400 has many positive attributes. Its soft rubber grip feels good. The mode dial sits on top of the camera and it’s very easy to grip and rotate. The buttons are also well-marked and reasonably sized.

The customizable Fn button is placed on the front left of the camera, which may seem like an unexpected location but you can use it to adjust the ISO settings as you won’t find any dedicated button for it.

The D3400 is equipped with the same 11-point phase-detection autofocus system as the D3300. The focus acquisition speed is reasonably good but in live-view, it may slow down a bit.

The AF dots are not clear which sometimes makes it difficult to shoot with confidence as you are always unclear that sharp focus is actually acquired. Still, the autofocus acquisition speed is pretty quick in good lighting conditions with the kit lens. It does, however, slow down a little in low-light conditions, but overall it never becomes unreasonably slow.

The new 18-55mm f/3.5-5.6 VR kit lens has an upgraded auto-focus motor which means that focus acquisition speed is now faster and smoother in live-view while shooting videos. Still, focusing in live view can still be a little slower than focusing through the viewfinder.

One big difference between D3400 and its predecessor is the SnapBridge technology which allows you to instantly transfer your data to your smartphone. But the camera lacks the Wi-Fi, which means its SnapBridge functionality is somewhat limited, lacking an option for remote shooting or movie transferring.

The D3400 delivers high-quality images. In fact, if we say that the image quality is one of the main selling points for this camera, we won’t be wrong. Nikon’s 24-megapixel DX sensor is one of the best in the world for its size, with an outstanding amount of detail and excellent ISO performance as well.

Indeed, the image quality of the D3400 matches the top-notch and expensive Nikon D500 (the Nikon D3400 slightly edges ahead at lower ISO settings while the D500 edges ahead a bit at higher ISO settings). The D3400 is a great choice for travelers and adventure lovers as it weighs less and takes up very little space in your bag, so you can carry it around easily.

Another big advantage of the D3400 is its battery and the camera deserves a lot of praise. On a single charge, it can give you 1200 shots, which is enough to give you the best and longest shooting experience. For many compact camera systems, battery life has always been an issue when it has to power both the LCD screen and electronic viewfinders, but this time Nikon has done a great job with providing enough battery to its new camera so that the user doesn’t have to worry about charging it up all the time.

Nikon D3400 has few improvements over the D3300. The new features in the former are relatively limited and if you are looking for a well-priced DSLR, the latter is still a good option.

However, if you need greater battery life, a more user-friendly interface, and SnapBridge technology, then it’s the newest version that you would want. Here is the table comparing them both.

The Nikon D3400 is a great DSLR camera aimed at first-time shooters. It’s lightweight, easy to operate, has SnapBridge capability, and great battery life. There are many other high-tech features it has been equipped with such as a reasonably good focus acquisition system. Above all, it offers these great features and solid performance at a very reasonable price.

However, the modest updates seen in the D3400 don’t really make it worth considering if you already have its predecessor but if you’re a novice DSLR user this camera is an excellent option to consider.

The control layout may disappoint more advanced shooters, and the camera doesn’t feature a touchscreen or articulating screen which could be a great improvement over its past models. Having said that, the D3400 performs very well and produces top quality results.

8
Score
The Nikon D3400 is one of the best entry-level DSLRs available on the market. It may have some downsides but whatever it does, it does with perfection. It’s a solid performer with huge battery life, outstanding image quality, and good focus acquisition system. First-time users will find it incredibly easy to operate.