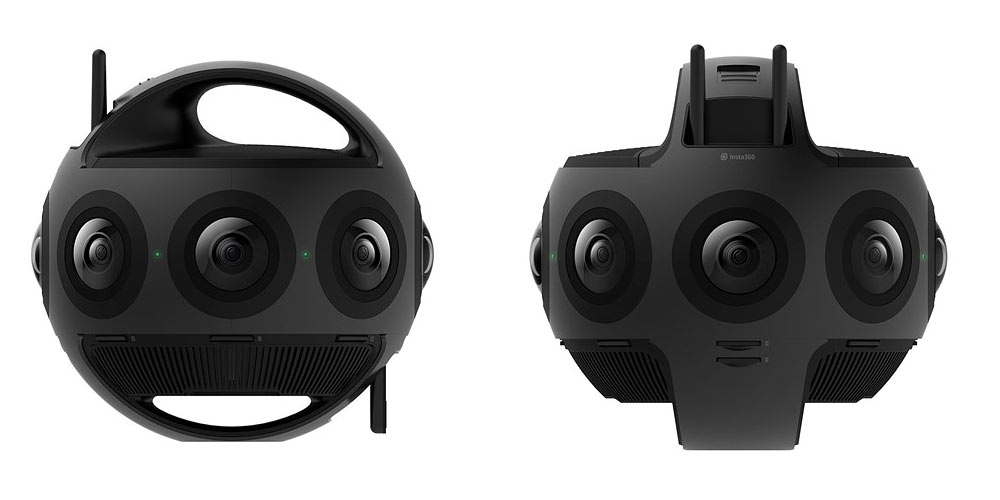 The Insta360 seems to have covered all bases when it comes to shooting video and stills in 360 degrees. From the One X consumer model to the top end Pro 2 which can produce 8K 3D 360-degree footage, the company definitely has a solution that seems to fit most 360-degree niches.

The Titan has raised the bar even higher with resolution using 11K aimed directly at professionals who need the highest quality. Eight lenses with Four Thirds sensors means this has the biggest sensor size of any type of VR camera. Those sold on the idea already will have to wait until April until they can get their hands on one, and this type of quality doesn’t come cheap.

First, the considerable specs that come with this camera. Instead of the common small-sized sensors found in most 360-degree cameras, the Insta360 Titan has the larger Micro Four Thirds sensors. All the sensors are Sony IMX269 Micro Four Thirds as found on the Z Cam S1 Pro surrounded by huge, 200° f/3.2 fisheye lenses, predicted to give far more dynamic range (8 – 10 stops), along with the 11K resolution. The Z Cam S1 Pro is a low-light specialist so, with the added resolution, it should bring in a new level of quality in this camera.

Quality and resolution are definitely where this camera shines. Considering 11K at 30 fps is seven times higher than 4K, you’re not just getting a huge resolution jump, but also way more lowlight capability.

With so much resolution you’ll need plenty of manual control. Exposure modes come in at auto, manual, Lens-by-Lens Custom, Shutter Priority (photo only), ISO Priority (photo only), Set ISO Upper Limit (video only). White balance modes are manual or automatic, with dedicated video modes being Standard (i-Log is available) / Binning (i-Log is available). Video coding is at H264 and H265 in-camera and Pro RES 422 HQ with post stitching and Mp4 output video files. Still images are produced as either JPEG’s or DNGs.

As you’d expect, all eight sensors produce a huge amount of data that is stored on 8x Micro SD or 1 SSD. Gyroscopic metadata and low-resolution proxy files are stored on a memory card.

The FlowState Stabilization technology works like a multi-axis system, with complete onboard stabilization. This results in ultra-stable and smooth footage. Being quite a large camera, the Insta360 Titan may be more susceptible to vibrations which the stabilization system will be perfect for curing. This will definitely make a difference if the camera is strapped to a moving vehicle or similar.

Insta360’s Farsight radio technology allows complete remote control of the camera as found on the Pro 2 model. This allows previewing of video, changing of all settings and starting and stopping recording. The live monitoring system can also be attached to a phone or tablet. Ground to ground range goes to 300m and ground to air range 1000m. This is such a needed feature on any type of 360° camera, as most of the time, you don’t want to be in the shot which means you’re usually around a corner somewhere. With such a huge range you can now hideaway anywhere you want.

Shooting at 11K is all very well, but not so good if there isn’t a playback system to support this resolution. The Insta360 Titan’s CrystalView playback facility can render in real-time exactly what is being viewed. There are also various output modes for you to decide on the final output resolution. If you check out Insta360’s YouTube channel there are example videos showing comparisons between the Titan and a regular 360° camera.

How Does the Insta360 Titan Compare?

The 360-degree camera market is quite specialized, so the amount of alternative models is quite low, especially with cameras that shoot at this high a level of resolution. The Insta360 Pro 2 360 camera is a close match shooting in 8K with slow-mo at 120 fps at a price point of around $2,550.00. The Titan is the only standalone 360 camera offering 11K at the moment, so we will have to wait for similar alternatives to come out as direct comparisons.

Until the release date we can’t give a completely conclusive review on this camera, but suffice to say at this point with 11K resolution, 360-degree footage from now on in 360 cameras will definitely be taking an increase in quality. At a touch under $15,000, the Titan is at professional level prices, but if you consider it is the equivalent of eight mirrorless cameras, it’s not as expensive as you think.

Traveling back a decade, taking high-quality 360° images involves taking a series of images and stitching them together in post-production. Producing 360° video in high definition felt extremely hard and having a dedicated unit, specialized to 360° video was near non-existent. Getting 11K 360-degree video from a dedicated camera now means we have the resolution to finally get any type of 360-degree footage we like. Happy days.

One bonus is the stitching software comes free with the unit, which is not always the case in this sector. If you would like one of these you can pre-order one to be shipped in April.