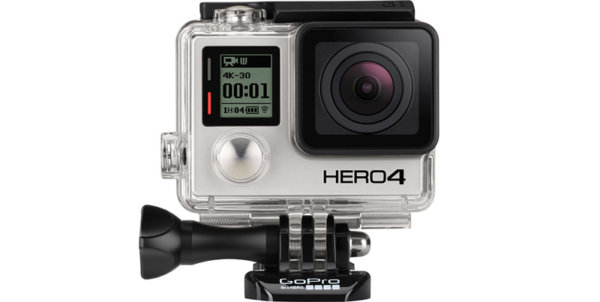 GoPro has become a household name for action cameras. With the release of their HERO4 series, the brand started a new era of Ultra HD videos with impressive frame rates.

There are two popular versions of GoPro HERO4 – Black and Silver (a budget-friendly HERO Session turned out to be less successful). These cameras are the same color, the only difference is in their specs. The GoPro HERO4 Black can record video in 4K resolution at a frame rate of 30 fps. The Silver Edition produces video with the same resolution but with two-times lower frequency. But, it can boast a touchscreen display and a more affordable price than the Black. Nevertheless, the Black version is the flagship model of the GoPro HERO4 line. Although it was released 4 years ago, the GoPro HERO4 series is still relevant today. Let’s see why.

Both HERO4 Black and Silver were introduced at the end of September 2014. The original price reached a whopping $499 (for comparison, four years later its successor HERO7 Black hit the market with a price tag of $399). The Silver version cost $100 less than the Black Edition. As of 2019, GoPro HERO4 Black can be purchased for $374 (check out our Best Price Deals section).

On the outside, the camera does not differ from the HERO3 models, apparently, to preserve the compatibility with accessories. The front panel hosts a prominent front lens, a monochrome LCD display with no backlight, two LED indicators, and a power button.

GoPro HERO4 Black is designed to withstand outdoor rigors and is waterproof up to 130 feet. During use, the camera will be mainly sealed in a special plastic protective case. Therefore, it does not have or need a touchscreen display.

Location of the display on the front panel is not very convenient. However, there is simply no room to place it on the back or on the side – the camera’s housing is pretty narrow and the battery compartment is situated behind. In addition to the battery, the rear panel accommodates the proprietary connector for accessories “HERO port” and one more indicator.

The upper side of GoPro HERO4 houses a record button, a LED indicator, and a microphone. The underside of the device has a lid to access the battery. Unlike its accessories, the battery is not compatible with devices of previous generations.

The rest of the ports and slots are placed on the left side and hidden under a plastic plug. This plug is perhaps one of the few design flaws of the camera. There is no attachment to hold the cap in place, so it’s very easy to lose. Under the plug, you will find a microSD memory card and a miniUSB connector (for some reason, GoPro utilizes this format instead of the more advanced and popular microUSB). Also, the left side of the camera features a speaker designed to play the service signals.

The camera’s case is made of matte soft-touch plastic. However, the device is designed to be used inside a protective housing, so the materials do not really play a big role. The dimensions of GoPro HERO4 are almost the same in comparison with the previous model (55mm x 40mm x 30mm) whereas the weight is only 88 grams (HERO3 Black weighs 76 grams).

The camera comes with a variety of accessories including a waterproof protecting housing, skeleton backdoor, two adhesive mounts for curved and flat surfaces, three-way pivot extender, two lengths of clips, and a mini USB cable. The standard kit does not include a remote control.

As we already pointed out, HERO4 Black doesn’t provide a touchscreen. The camera is controlled either from a mobile device (an appropriate app is required) or from the front-panel LCD monitor. Unlike the flagship model, GoPro HERO4 Silver features a 1.5-inch built-in touch display located on the back panel. You can complete your HERO4 Black with a GoPro’s LCD Touch BacPac if you wish to have a convenient way to change the settings and preview what the camera shoots.

GoPro HERO4 Black is controlled via a phone or tablet, which is connected via Wi-Fi and the GoPro mobile app. The software is available for all popular mobile operating systems – iOS, Windows Phone, and Android.

The GoPro App allows you to record videos and shoot stills in various modes. With the app, you are able to change every possible setting, from video resolution to speaker volume. At the same time, you can use the LCD display on the front panel to instantly start video recording or take a picture.

Although there are very few complaints about the camera’s performance, not everything works smoothly. First of all, it is not always easy to establish the connection between the camera and mobile device right away; sometimes the connection fails during use. A slight delay is also possible.

The camera also has a slight delay of a video stream in live mode; however, it is no more than a second. The distance at which the connection is supported is up to 50 meters (164 feet) and it largely depends on surrounding conditions, obstacles, and other Wi-Fi networks.

By the way, you shouldn’t skimp on memory cards when using the HERO4. This will help avoid some of the camera’s hard-to-explain errors: camera freeze-ups, significant lag in response when pushing buttons, and lingering finalization of recorded videos and photos.

Here are the main specs of GoPro HERO4 Black and the budget-friendly HERO4 Silver:

GoPro HERO4 Black Edition has truly outstanding video shooting capabilities. The maximum resolution is 3840×2160 pixels (it corresponds to Ultra HD), which is compatible with the frame rate of 30 fps. You can opt for a lower resolution combined with higher frame rates. The top frequency of 120 fps is achieved with Full HD (1920 x 1080 pixels) and HD (1280 x 720 pixels). If 120 fps is not enough, there is a mode of super-speed recording, which doubles the fps but reduces the resolution to WVGA (848×480 pixels).

GoPro HERO4 Silver is also able to shoot in Ultra HD but its frame rate is reduced twice in comparison with the flagship. 120 fps is achieved with 1280 x 720px resolution, and the maximum frequency is available only with 848 x 480px.

In most cases, it suffices to use one of the various standard modes to get high-quality video recordings. However, the GoPro HERO4 offers a special mode called ProTune for professional users who desire to process videos on a PC. Upon enabling this mode, it becomes possible to adjust the white balance, color, ISO, sharpness, and level of exposure at your discretion. When shooting in ProTune, the picture becomes more blurry because the processing within the camera is turned off. The manufacturer recommends for experienced users to independently adjust this parameter in a video editor.

The quality of videos produced by GoPro HERO4 is truly remarkable. In fact, the Black Edition is the best-quality action-camera of its time. The picture is clear, balanced, and with natural color reproduction. However, a drop in quality may occur when shooting in low light conditions. To fix the situation, you can resort to the Auto Low Light mode, which adjusts video settings for recording in twilight and darkness.

Along with video shooting, GoPro HERO4 can be used as a photo camera. The most interesting mode is a continuous shooting when the camera keeps taking photos until the shutter button is pressed. The shutter intervals can be adjusted with a maximum frequency of 30 frames per second. In addition to continuous shooting, the camera offers a time-lapse mode. It allows taking automatic photography at intervals from 0.5 to 60 seconds. A Night Lapse option is designed specifically for shooting at night with a large aperture.

Photo shooting can also be done with fine manual adjustments when the ProTune option is enabled. The maximum resolution of images is 12 megapixels.

GoPro HERO4 is equipped with a removable lithium-ion battery with a capacity of 1160 mAh. Such a small battery size is probably the biggest drawback of the device. The battery life does not exceed 2 hours of continuous recording when Wi-Fi is turned off. Video in high-resolution or with high frame rates significantly reduces the battery life. When recording Ultra HD and Full HD at 120fps, the camera works for about 1 hour and 10 minutes. When Wi-Fi is enabled, the battery lasts 5-10 minutes less.

While operating, GoPro HERO4 produces a great deal of heat. Thus, within 30 minutes of continuous video recording in the 4K 25fps mode with Wi-Fi turned off, the camera’s housing warmed up to 55 °C (131 °F) while the temperature around the display rocketed up to 68 °C (154 °F). Shooting was conducted in a mildly warm room without the protecting housing. The camera is even more prone to overheating when it is placed in its waterproof housing.

The GoPro HERO4 Black Edition offers a great value for the money. Whether you are a thrill-seeker wishing to capture your adventures or you want to experiment with HD videos, this camera is surely the pick of the bunch. It is nearly $100 cheaper than the flagman. Thanks to the built-in touchscreen display, HERO4 Silver is a perfect solution for everyone who values the ease of use.

GoPro HERO4 has become a hero of its time. When the camera was released in 2014, it was a truly groundbreaking product, and it’s still in demand even though GoPro HERO7 has already hit the market.

9
Score
GoPro HERO4 Black is an ultra-secure device capable of coping with the widest range of working conditions. You are able to shoot Ultra HD videos, film in slow-mo, create timelapse, and much more. GoPro HERO4 Silver offers a perfect balance between the quality and price.