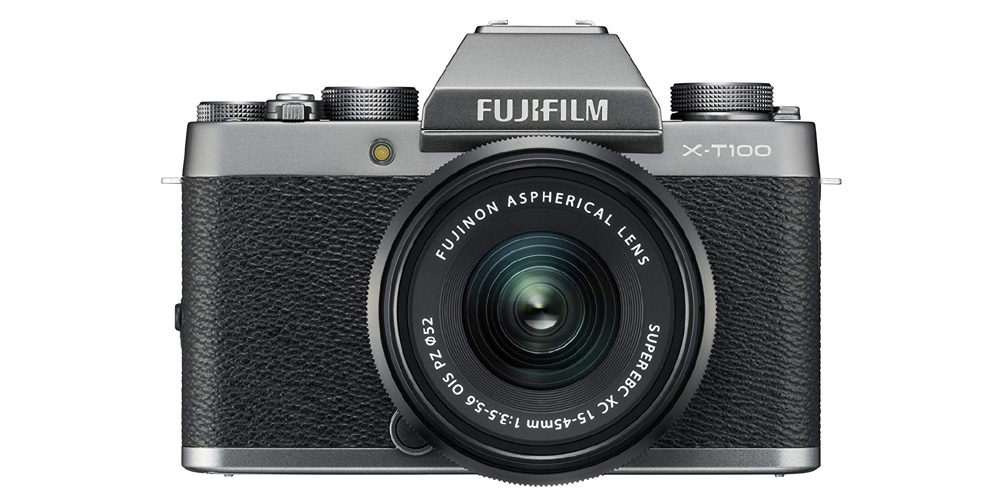 The Fujifilm X-T100 is a stylish and advanced camera that has been designed for beginners but sits above the entry-level cameras. Unlike the Fujifilm’s high-end X Series camera lineup, it employs a 24-megapixel APS-C CMOS Bayer sensor. Other notable features include an electronic viewfinder, a three-way touchscreen display, and 4K video capture. The camera is lightning fast. Although it isn’t equipped with Fujifilm’s latest high-tech features, it offers great value for the money.

Its three-inch touchscreen offers a three-way tilt mechanism and has a decent 1,040k-dot resolution, while the built-in OLED electronic viewfinder with 2.36 million-dot resolution provides 0.62x magnification.

The design of the Fujifilm X-T100 is almost similar to the X-T20. Although the top and bottom plates of the X-T20 are built with magnesium, the X-T100 features an anodized coated aluminum top cover.

It can be compared with the lower-end Fujifilm cameras such as the X-A5 but unlike the plasticky design of past models, the X-T100 has a great premium finish. It weighs 448g, which is more than the X-T20’s 383g.

Grip of the camera is solid, thanks to its leather-wrapped body. It also comes packed with the detachable grip which can be screwed into the side of the camera’s body, hence dramatically improving its grip.

The shooting mode dial is located in place of the shutter speed dial on the X-T100. You will find two unmarked dials on either end of the camera’s top deck. A vertically mounted rear dial is provided to control parameters like the aperture or shutter priority mode. The top dial on the right-hand side of the camera provides control over the exposure compensation while the dial on the left can be used to scroll through the various Film Simulation modes.

If you are shooting in full manual mode, the rear dial is set to give you control over the aperture and the top dial on the right will control the shutter speed. A small function button that sits on the top plate can be used for different customization options, with ISO being the default.

While the Fujifilm X-T100 doesn’t incorporate Fujifilm’s state-of-the-art X-Trans sensor, its 24.2MP CMOS Bayer sensor does a fine job for an entry-level camera. The camera produces nice and detailed JPEG images. You won’t find excessive sharpening in the results. Images come out with rich colors, smooth tones, and a nice amount of detail.

You also have the option to shoot RAW and process them to your taste. The Advanced Filter modes of the camera produce some interesting results as well and give your photos a more distinctive look.

The ISO performance of the X-T100 is quite good. It manages to retain a lot of detail up to ISO 1600. If you opt to go above this setting, images will significantly lose the detail as the camera’s noise-reduction algorithm tries to produce cleaner images at the cost of detail in the process. However, if you think it’s absolutely necessary to shoot with a high ISO, then shoot RAW instead, as the noise is very well managed at ISO 3200 and 6400.

The Fujifilm X-T100 has the same 91-point hybrid autofocus system as found on the entry-level X-A5. Its 35 phase-detect points roughly cover 40 percent of the frame, which means the camera lags behind some of its rival mirrorless models. However, it’s better than most of them when shooting through their optical viewfinders. The X-T100 offers three focus modes: single-point, zone, and wide/tracking mode.

Just like the X-A5, focusing speeds are good but not as quick as the more advanced AF systems that you will find on the X Series cameras. So, you shouldn’t expect too much of the camera’s focus tracking capabilities.

As for the connectivity options, the X-T100 features a WiFi and a low-power Bluetooth that was initially used on the X-E3. Using the Fujifilm’s free Camera Remote app, you can connect the camera with your smartphone to transfer the images.

The Fujifilm X-T100 is equipped with the same NP-W126S battery as other X-Series shooters, and it provides around 400 shots on a single charge, which is not the best, but average battery performance. However, it’s quite helpful having an option to charge the battery via micro-USB while it’s in the camera.

How Does the Fujifilm X-T100 Compare?

Several APS-C mirrorless cameras on the market offer almost the same set of features as the Fujifilm X-T100. Sony’s popular a6000 is also among these cameras, but the X-T100 gives you a lot of reasons to choose it over others. Here’s how the X-T100 compares with the Sony a6000 in terms of the features.

The Fujifilm X-T100 is an APS-C mirrorless camera with excellent photo quality plus a unique three-way tilt LCD mechanism, high-resolution viewfinder, and decent battery life. However, its autofocus subject tracking capabilities are not as good as one should expect from high-end Fujifilm cameras. It offers 4K video capture at 15 frames per second, which also isn’t as good as other options.

While the Fujifilm X-T100 may not be able to impress us like some of the Fujifilm’s top-end X-Series cameras, this modern and stylish shooter has a lot to offer and can be a great option if you are looking for your first mirrorless camera.

8
Score
The Fujifilm X-T100 is a premium entry-level camera, which has been equipped with almost all necessary features that a beginner photographer should look for.