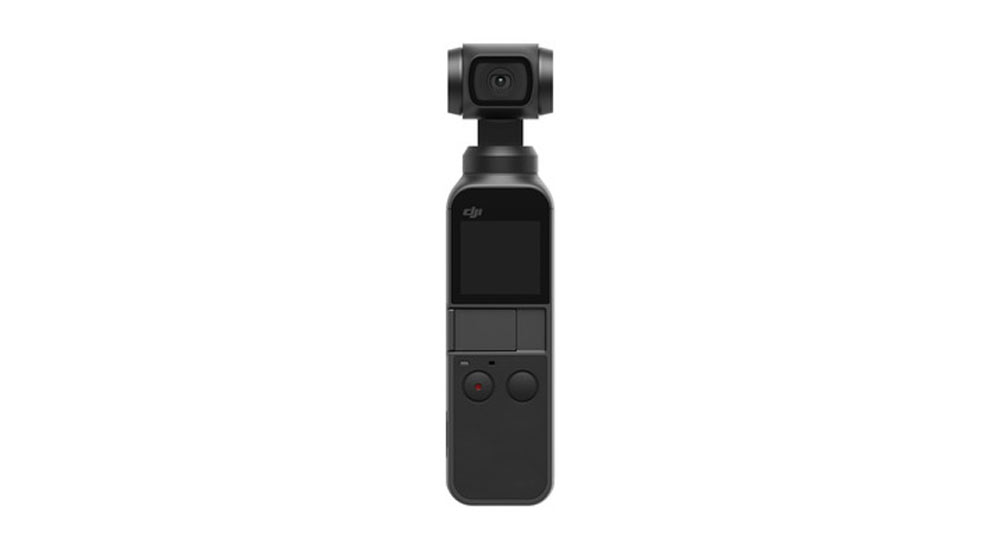 The DJI Osmo Pocket is an interesting device which is small and compact, shoots 4K video and has a great range of motion with its three-axis gimbal. The device is marketed as the world’s smallest 4K compact camera with a three-axis gimbal, with the target market aimed at a YouTuber on the go who wants stabilized footage at a reasonable price.

The design of the DJI Osmo Pocket is very cute on first impressions. It’s only 12cm long and 118g in weight, which means it’s small and light enough to be put in a jacket pocket. It very much reminds me of a GoPro attached to its own gimbal arm, just smaller and much lighter. The camera itself is very similar to the setup on the DJI Mavic Air drone, just with a bigger aperture at f/2.0 and a 25.7mm focal length for wide-angle shots.

As above, you can buy a GoPro and separate gimbal arm, but there is nothing out there as a complete unit, which also has object tracking and loads of effects to boost your creativity. However, the DJI Osmo Pocket does have some drawbacks in that it’s not waterproof like some other units out there and does still need a smartphone and some accessories to get the most out of this unit.

The DJI Osmo Pocket camera itself comes with its own little carry case and its clear showpiece being the three axis gimbal with the camera that can shoot 4K 60fps and take 12-megapixel still images. The big benefit and selling point to this unit is its mechanical gimbal which does all the stabilization. Unlike electronic image or optical lens stabilization, the Osmo Pocket uses three small motors to balance everything over three-axis.

Although smartphones have very decent in-camera stabilization these days, you just can’t beat a mechanical gimbal for smooth footage. A smartphone and separate gimbal arm are much bigger, bulkier, and more expensive than this unit, plus you really don’t feel like you’re carrying anything big heavyweight around with you.

The other benefit of a mechanical gimbal is you feel more in touch with how the camera is moving. Panning and tilting feel more intuitive, while sweeps of the camera translate into very smooth movement. It just feels like you’re getting more professional footage this way. Being so small and lightweight means it will take some practice to balance things properly, along with learning what it can and can’t do.

I’ve tried some of the GoPro gimbals which can cost as much or more than this unit but being more substantial and heavyweight, they also feel a little more controllable as the physical weight gives more feedback to your hand for what you are doing. With the DJI Osmo Pocket, you feel like you want to double its length for a bigger grip, but I get why they have made it so compact in size.

Control-wise you have two main buttons and a one-inch touchscreen for operation. The touchscreen is for the majority of controls from the shooting modes, previewing footage and various selections, such as 4K 60fps or other video formats. One downside is that you can’t move the camera when recording. This will need a smartphone attaching using the DJI Mimo app. Its not exactly the most convenient way to operate the device.

The gimbal has various controls for fine tuning its movements. There are different modes such as ‘Follow’, ‘tilt locked’ and ‘FPV’ each being able to lock an axis and define the stability depending on your shooting situation.

With a smartphone attached, the DJI Osmo Pocket can start to feel a little bit unwieldy, so to get the full functionality you will need to buy into some of the accessories. This cures the problem of controlling the device wirelessly, physical control and mounting. These can come in a bundle as the ‘Osmo Pocket Expansion Kit’ which includes a wireless module, accessory mount and controller wheel. Rather than being an optional extra, these accessories are almost a prerequisite to get the full functionality, but once you have them, the setup starts to feel far more professional in usage.

The DJI Osmo Pocket’s video quality is excellent and will definitely suit a YouTuber. You can flick straight into selfie mode with face tracking for the common face to camera footage with the ability to focus on the subject. This works fine if you have loads of light but is a bit slow in low light. You can touch the screen and select a subject to focus on with ‘ActiveTrack’ just like on a drone, but this can’t be used in 4K mode. You can also draw with different points for the cameras to track between different subjects.

In good lighting conditions, the video quality is sharp and accurate for it sensor size and worked surprisingly well in low light, with not much noise. You can change the ISO levels from the 100-3200, the shutter speed, anti-flicker and video bit rate to optimize your footage. At this price point, these features will allow you to dip your toe into how a more expensive video camera works.

The video quality is what you would expect from a high-end smartphone, but it’s the combination of the gimbal, software and accessories as a package is what gives great results.

The DJI Osmo Pocket is a great addition and upgrade from shooting solely on a smartphone. The integrated three-axis gimbal is clearly the selling point here with the inclusion of some clever software, meaning this camera can do some nifty moves above and beyond the competitors.

However, the audio side of things is not great and it’s recommended to record any sound separately on a different device. The video quality is definitely there with 4K, but it’s really no different in quality than what you could get on a premium smartphone. There’s also the factor of it not being weatherproofed like a GoPro unless you buy the additional case, which may limit its use for outside sports.

This DJI Osmo Pocket does have its limitations and you have to buy into the accessory kit to get the full use of this thing, but as an all-in-one package for the price, it gives great video quality with some creative functionality, definitely a step up from just using a premium smartphone. Audio is average, but you really can’t beat the functionality of the three axis gimbal for giving you super smooth footage.

9
Score
The DJI Osmo Pocket is a unique all in one 4K camera and three axis gimbal, which provides footage on a par with a premium smartphone. Along with the accessory pack you get full functionality and loads of pro like features.