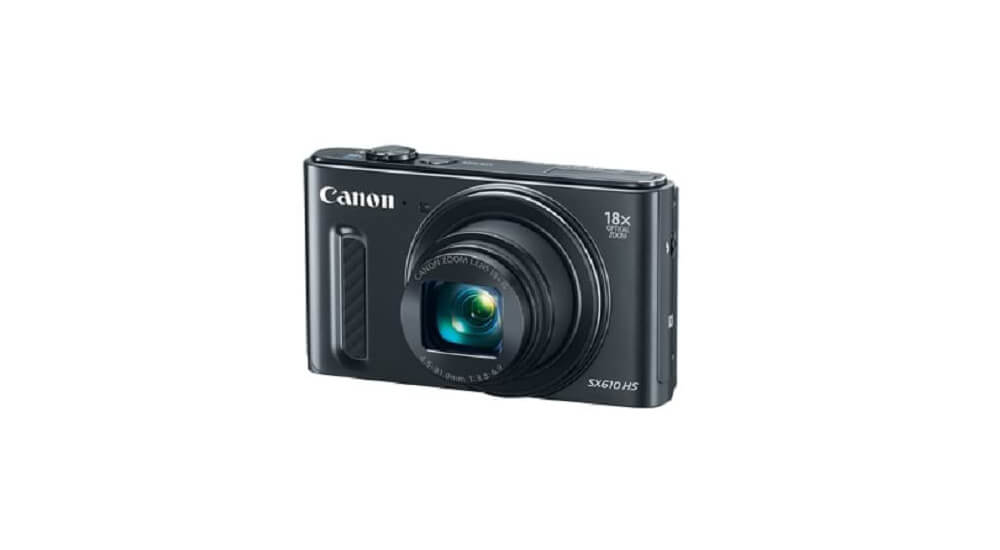 The Canon PowerShot SX610 HS is a solid, portable point-and-shoot camera that features a decent zoom and a high-quality image sensor. It is now considered one of the older Canon PowerShot models, but it still performs well and is a decent all-around camera for general usage.

This point-and-shoot camera is a great budget buy and is one of the cheapest PowerShot models available. As stated, however, it is an older model and therefore has some older features. You can find the main technical specifications of this camera below:

As you can see, one of the main downsides is the older image processor. The DIGIC 4+ is quite old. For example, the Canon PowerShot SX730 HS has the DIGIC 6 processor and is still considered old. Newer Canon digital cameras have a DIGIC 9 processor or better. This essentially means that the image quality and light transmission may not be as sharp as newer cameras.

Also, the Canon PowerShot SX610 HS has an 18x optical zoom, which has an effective focal length of 4.5-81.0mm (35mm equivalent of 25-450mm). This is smaller than some other newer Canon PowerShot models, but it still gives decent range, combined with a maximum aperture range of f/3.8-f/6.9.

It also features built-in image stabilization which helps when using the lens handheld and when using the optical zoom. The IS reduces camera shake for up to 2.5 stops. It has one SD Card slot and takes rechargeable Li-ion batteries (NB-6LH).

We like the design of the Canon PowerShot SX610 HS. As with most PowerShot models, it has a sleek and stylish design and looks fantastic. It is also available in three colors, black, red, and white. With a total weight of just 191g, it is also one of the lightest PowerShot cameras available and makes a decent travel point-and-shoot camera.

The rear and top panels are uncluttered and feature minimum buttons and dials. On the top panel, there is only the on/off switch, the shutter release, and the rotating dial to use the optical zoom. This means there is no control dial to change through different shooting modes.

To change shooting modes, there is a three-pronged switch on the rear panel. This allows you to change between auto, scene, or video modes. As a result, the Canon PowerShot SX610 HS does not have the same flexibility in control as some other models.

It also features a large LCD screen that is in a fixed position. It doesn’t have any touchscreen capabilities. To control your composition, you must use the main buttons on the rear panel. The design is not bad, but it does lack some of the features and usability of later models like the Canon PowerShot SX740 HS.

For beginners, this camera is easy to use. It is geared towards users that have minimal photography knowledge. This is evident by the lack of a mode dial to switch to shooting modes like aperture priority and shutter priority.

The menus and controls are also simple to use, and you can just set the camera in auto mode so it selects the best settings for you, depending on the scene. If you just want a camera to use straight out of the box with minimal effort, this is a good choice.

It does have Wi-Fi so you can transfer images to compatible mobile devices. Also, it can record video in 1080p at 30p. However, the autofocusing system is average. Again, later Canon PowerShot models have much better autofocusing for both video and photos.

To make shooting easier or to take selfies and portraits, you can control the camera via a remote shooting function. If you connect your smartphone to the camera, you can use it as a remote shutter. A live image of your camera screen is shown on your phone, and you can control everything, including the zoom, flash, and shutter.

We have mentioned the Canon PowerShot SX740 HS several times in this article. It, therefore, makes a suitable comparison to the Canon Powershot SX610 HS. We can compare these models and show how the PowerShot series has progressed and the camera technology improved.

As you can see, the PowerShot SX740 HS has better video recording capabilities and a slightly-better image resolution. Building on this, it also has the DIGIC 8 processor which offers better quality than the DIGIC 4+ processor of the SX610 HS.

The PowerShot SX740 HS also has a 40x optical zoom which provides an effective focal range of 4.3-172.0mm. This again is superior to the SX610 HS. Other features that have been improved include the shooting models and the slightly better maximum aperture.

As you can see, Canon has refined their point-and-shoot technology. The PowerShot SX610 HS is still a good camera, but models like the SX740 HS do provide better features and quality.

This camera is not the most advanced, and it doesn’t provide the best quality. However, it is an above-average point-and-shoot camera for beginners. If you simply want a camera to take high-quality photos with, without having detailed technical knowledge, this is an excellent choice.

7
Score
The Canon PowerShot SX60 HS is a decent choice for beginners or those who just want a quality camera. You can take quality photos without in-depth knowledge of manual camera workings.