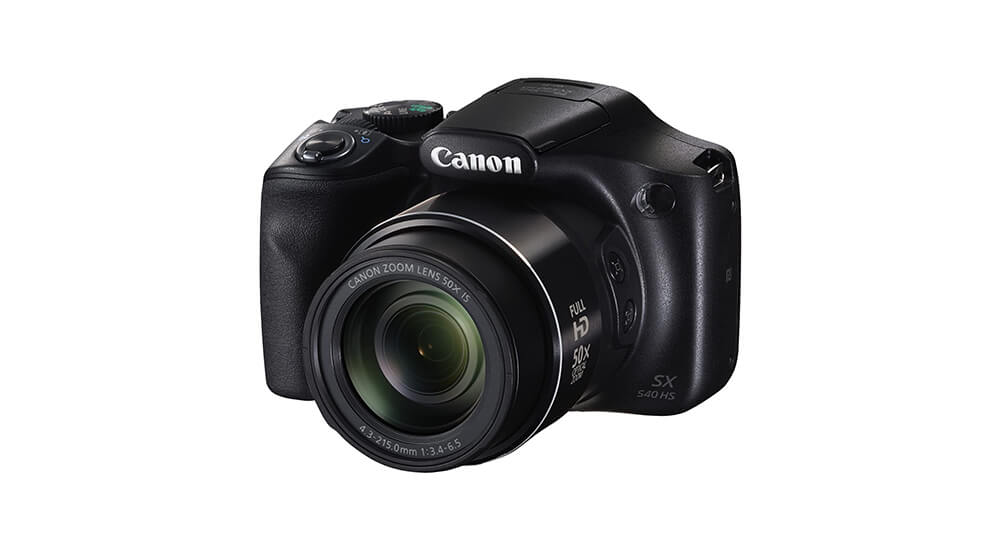 This compact camera has point-and-shoot features with a DSLR-like design, and is a great model for beginners to use. Using this camera, you could get used to how a DSLR camera looks and feels without being overwhelmed by complex DSLR camera settings.

It also has a solid set of features and still allows you to create high-quality photos and videos. In this review, we look at the Canon PowerShot SX540 HS and what it has to offer in terms of features, design, usability, and performance.

The image stabilization is a great feature and helps when using the camera handheld. It corrects camera shake for up to three stops. Also, the lens of the Canon PowerShot SX540 HS has a 50x optical zoom and a 100x ZoomPlus.

This gives it an effective focal length of 4.3-215mm. As a result, you can shoot everything from wide-angle through to telephoto. The ZoomPlus feature also allows you to shoot at super-telephoto distances, however, the quality is not as good as the standard optical zoom.

It has an ISO range of 100-3200, which is okay but not the best for low-light photography.

The Canon PowerShot SX540 HS looks fantastic. It has a stylish design that looks like a traditional DSLR camera body. This includes a large, textured grip on the right-hand side. As a result, it is comfortable to hold and you can easily support the lens.

We like the layout of the buttons on the rear and top panels. It presents a relatively uncluttered setup. On the top, there is the standard Canon program dial that allows you to change between the different shooting modes. You can control the zoom easily using the rotating dial surrounding the shutter button.

At 442g it is still relatively lightweight, although it is bulkier than some other point-and-shoot cameras like the Canon PowerShot SX730 HS.

For beginners, this camera is easy to use. The program dial allows you to quickly change between different shooting modes. This also features Canon’s Auto shooting mode which automatically chooses the best camera settings for you.

However, if you still want greater control, it does have other shooting modes including shutter priority, aperture priority, and full manual. This means that you can steadily learn about advanced photography functions and techniques.

As mentioned, it does not have an EVF. This may not be an issue, however, as using the LCD screen is easy and the controls are easy to learn, too. The menu is simple and easy to navigate, and you can quickly change the camera settings and things like image resolution.

The Canon PowerShot SX540 HS has built-in Wi-Fi and NFC capabilities. This means you can download photos and video to external devices like a smartphone or tablet.

The COOLPIX B500 is a mid-range camera that has similar specifications to the Canon PowerShot SX540 HS. You can see a basic comparison below:

As you can see, the PowerShot has a higher image resolution at 20.3MP. This will make a noticeable difference to the basic image quality. The SX540 HS will produce high-quality images that are sharper and have greater depth.

Both cameras can record at 1080p HD and both have a decent autofocusing system. Compared to high-end DSLR cameras, their autofocus system is basic, but there isn’t much to choose between the two. One area that the Nikon COOLPIX B500 excels in is its ISO range. It has a maximum ISO of 6400, which gives it greater flexibility for shooting low-light photos.

On the flip side, the PowerShot SX540 HS is much lighter than the B500. It is 100g lighter which makes a considerable difference. However, in terms of design and shape, both cameras are relatively bulky compared to other point-and-shoot and bridge cameras. For basic image quality, the Canon PowerShot SX540 HS is the better option.

For Beginners, the Canon PowerShot SX540 HS Is a Solid Starting Point

If you want a simple camera that has some advanced features and provides good image quality, the Canon PowerShot SX540 HS is a solid choice. Beginners can use the automatic shooting mode feature to take quality photos. Then, they can progress to more advanced techniques by using the different manual and semi-manual shooting modes.

This camera is also relatively inexpensive and a good choice for those working to a budget.

7
Score
The Canon PowerShot SX540 HS is a decent camera for beginners that offers good image quality with its 20.3MP CMOS sensor and DIGIC 6 image processor.