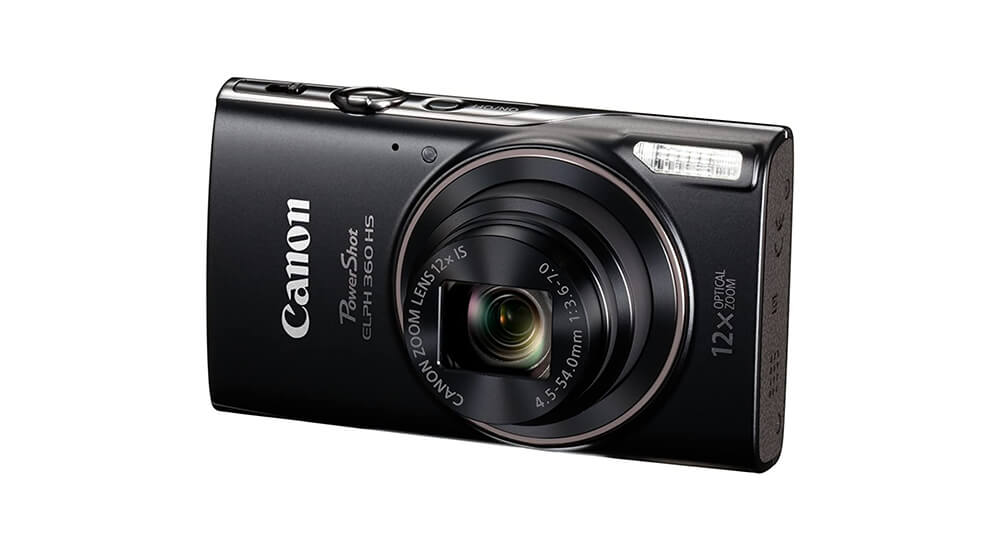 This is a relatively affordable point-and-shoot camera that could be the perfect choice for those who don’t need advanced features or the best technical specifications. You can essentially use this camera out of the box to take quality photos and even record video at 1080p HD. It is also available in three stylish colors and is one of Canon’s smallest point-and-shoot cameras.

Compared to other Canon point-and-shoot cameras, the Canon PowerShot ELPH 360 HS still has decent features and specs. One of the main areas it falls down in comparison to models like the PowerShot SX740 HS is its image processor.

It only has the DIGIC 4+ image processor, which is a much older version. For example, newer Canon cameras usually have DIGIC 8 or higher. This essentially means that this camera is not as efficient at processing images. You can see the main technical specifications of this camera below:

The lens of the Canon PowerShot ELPH 360 HS is decent. It has a 12x optical zoom and an effective focal length of 4.5-54mm. This gives a 35mm equivalent of 25-300mm. Compared to some other point-and-shoot cameras, this zoom lens is lacking. However, the ELPH camera is meant for closeups, action shots, and general photography, not specialist zoom shots.

The Canon PowerShot ELPH 360 HS has a great design and is one of the smallest and lightest Canon point-and-shoot cameras available. It weighs just 130g and has a longest length of 99.6mm. It can comfortably fit in your pocket and you will hardly notice it when carrying it. Its small size makes it ideal for day trips, travel, parties, and more.

It also features a simple and uncluttered control panel. The rear is mainly occupied by the three-inch LCD screen. There is a small selection of buttons including the playback button and a record button for videos. On the top, there is a program switch, power switch, and shutter release.

For users who don’t have advanced camera knowledge, this is a relatively simple item to use and the buttons should never be confusing. The basic package also comes with a durable wrist strap, a single Li-ion battery, and a battery charger.

This camera is highly usable, especially for those who don’t have much experience using a camera. It has a host of automatic shooting modes, including macro modes that allow you to quickly take photos without setting up the camera. You can select an automatic shooting mode and the camera chooses the best settings for you based on the current scene.

We also like the ease-of-use for the zoom lens. The zoom button is located around the shutter release. You can turn it left or right to zoom the lens in or out respectively. You can easily control the zoom while still keeping your finger near the shutter release to quickly take photos.

The Canon PowerShot ELPH 360 HS has great connectivity. It has built-in Wi-Fi and you can connect the camera to the Canon Camera Connect App. This allows you to control the camera remotely using your smartphone. You can change image settings, control the zoom, and take photos. Overall, this camera is highly usable, especially for beginners.

As you can see, a major difference is the image resolution. The ELPH 300 has only a 12.1MP sensor, whereas the ELPH 360 HS has a 20.2MP sensor. This makes a huge difference and means that the raw image quality of the Canon PowerShot ELPH 360 HS is much better.

You gain this much-improved image quality for only a small price increase, too. The other specifications are similar, but the ELPH 360 HS has a newer image processor and a better lens. The ELPH 300, for example, only has a 5x optical zoom lens.

So should you purchase this point-and-shoot camera? If you just want a basic camera that offers great image quality, this is a solid choice. It’s true, though, that it doesn’t offer the advanced features or utility of some of the other PowerShot cameras. Also, it doesn’t offer the same quality as Canon DSLR or mirrorless cameras.

However, for the price, it performs well and can create great images in a variety of situations. It makes a decent travel camera due to its incredibly small size and weight.

7
Score
The Canon PowerShot ELPH 360 HS is a great starter camera for those who just need a simple device that produces quality images without any fuss.