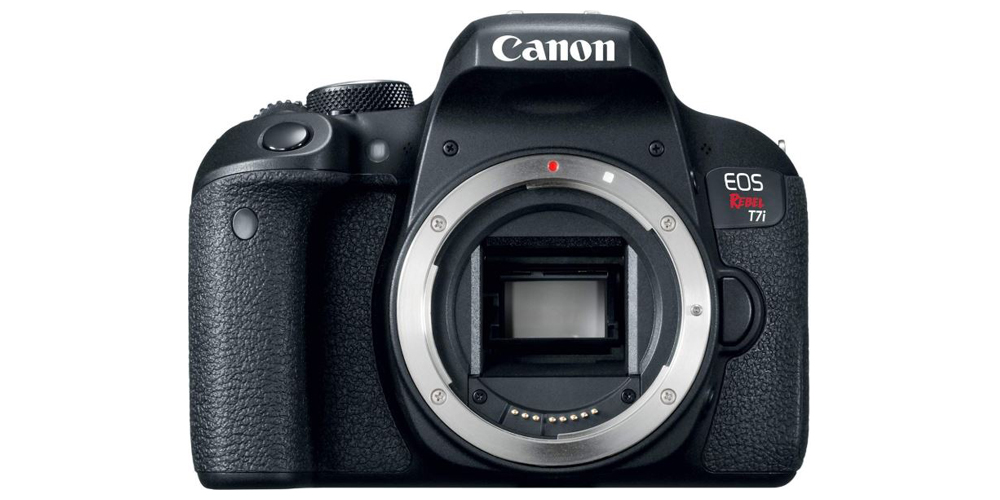 Entry-level DSLRs are now ten a penny, but the Canon EOS Rebel T7i (EOS 800D outside the US) still stays top of the tree in Canon’s entry-level DSLR range.

This version is an update to the EOS Rebel T6i (EOS 750D), which was released in 2015, and it comes with some extra features like an improved Digic 7 sensor for superior noise handling and an impressive 6fps for continuous burst shooting.

While mirrorless cameras are taking the photography world by storm, there are still solid reasons why you would choose a DSLR like the Canon EOS Rebel T7i instead – including longer battery life, optical viewfinder, and the chunkier feel of a DSLR.

Let’s take a look at whether the Rebel is still relevant and how it stacks up against its rivals on design, handling, image quality, and performance.

The Canon EOS Rebel T7i has the same 24.2MP resolution as the Rebel T6i, but Canon has overhauled the sensor. The improved sensor comes with a Digic 7 image processor, which gives the EOS Rebel T7i a better ISO range (ISO 100 to ISO 25,600) and autofocus than the Rebel T6i.

Canon sticks with the same three-inch vari-angle touchscreen with 1,040,000 dots, which has already proved to be one of the better touch interfaces around.

It’s surprising that Canon has only included Full HD 1080p video as a feature on the EOS Rebel T7i, as most new cameras have 4K video featured as standard. Canon has given the T7i a five-axis image stabilization system for shooting smoother hand-held video footage, but it doesn’t apply to still photos.

As for footage transfer, the Rebel T7i has Wi-Fi and NFC connectivity like its predecessor, but there’s also an option to have a low-energy Bluetooth connection so you can be constantly connected to the camera (a little like Nikon’s SnapBridge).

The EOS Rebel T7i is built from aluminum alloy and polycarbonate like the T6i, but it is around 20g lighter. The build construction is good, but the plasticky finish makes it feel and look a little cheap.

The Canon EOS Rebel T7i in Use

Focusing in low light levels can be a problem, but not with the Rebel T7i. It’s sensitive down to -3EV, so searching for an autofocus point shouldn’t be much of an issue.

The Rebel T7i has a phase-detect system, which means that focusing speed is improved from the T6i. Tracking of moving subjects is also very good, due to the 7560-pixel metering sensor.

For video capture and live view photography, the EOS Rebel T7i has been equipped with Canon’s Dual Pixel AF, which is a big improvement on the older Hybrid CMOS AF III system.

Dual Pixel AF gives you 49 AF points (in a 7×7 grid) and allows for fast and effortless focusing, which makes it much better than the clumsy Hybrid CMOS – and even rivals some mirrorless systems.

Canon has boosted speed on the EOS Rebel T7i by improving the frame rate to 6fps, but this is pretty slow compared to some mirrorless cameras. One place it beats its mirrorless rivals is the battery life – 600 shots from one charge.

A welcome addition for beginner photographers will be the graphical interface that helps by explaining the settings and giving advice to get the best shots. Those with more experience have the option of disabling this feature in the menu.

In terms of image quality, the Canon EOS Rebel T7i performs well, and the improved noise-handling capabilities make it superior to the T6i, although they both have the same sensor size.

When shooting in JPEG, the colors are good, but perhaps lack a bit of the crispness that you can get from rival cameras in this price bracket. The dynamic range is also an improvement on the T6i, but is still lagging behind other camera brands.

How Does the Canon EOS Rebel T7i Compare?

The nearest rival the T7i has is the Nikon D5600, and they are pretty closely matched in many ways. The autofocus performance on the T7i is superior to the D5600, which is a big plus if you want to use Live View a lot.

The finish on the D5600 is nicer than the cheap plastic feel of the T7i, but if you’re more into performance than looks that isn’t going to be an issue.

As far as price goes, the T7i is a little more expensive than the D5600, but there’s not much to choose between them. A lot will depend on which camera systems a beginner decides to choose. There’s fierce brand loyalty with both Canon and Nikon, and both of these entry-level cameras do their job well.

While the Canon EOS Rebel T7i may seem rather outdated compared to new mirrorless cameras, there’s still a lot to love. The EOS Rebel series has always been dependable, and it’s a good choice for those looking to upgrade from a smartphone or those wanting to move on from the EOS Rebel T6i.

The sensor handles high ISO very well, and the new AF system is very impressive. Picture quality is good, and it has an easy-to-navigate menu and control layout. The things that make me less than impressed are the cheap plastic finish and the lack of 4K video. However, if you are looking for a solid workhorse of an entry-level DSLR, then the EOS Rebel T7i is as reliable as ever.

8
Score
The Canon Rebel range has been around for a long time, and the EOS Rebel T7i does offer comparatively good value. While the build quality leaves something to be desired, the image quality and overall handling are still great.