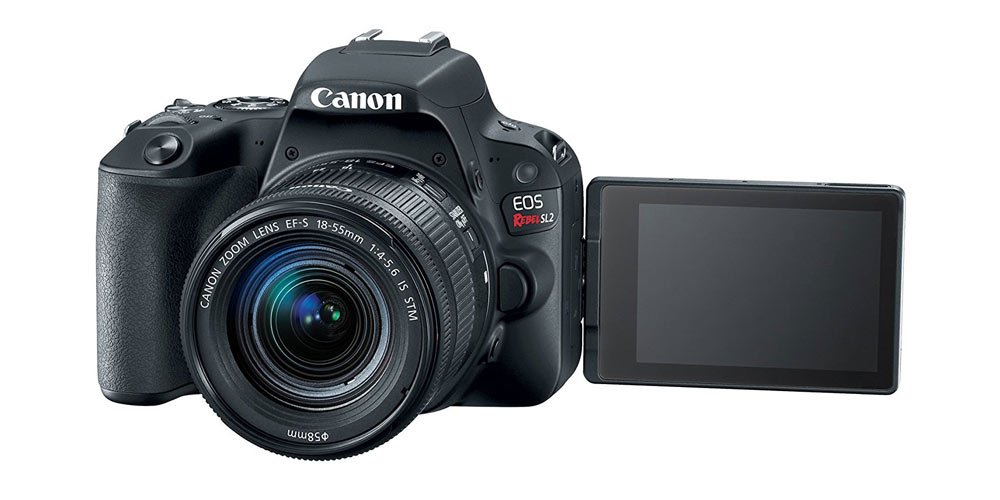 The Canon EOS Rebel SL2/200D is a compact DSLR with many of the latest bits of functionality, not quite entry-level, but the next step up. The new features make it feel more current than the EOS Rebel T6/1300D or Rebel T7/2000D with the SL2 having features such as Dual Pixel autofocus and the DIGIC 7 processor.

There’s quite a bit of competition at this end of the market, especially from mirrorless designs. Likely competitors include the Nikon D3400, Canon M50, Panasonic GX85 and Sony a6000. Each has its pros and cons, but they are also general factors with each format. The mirrorless offerings usually have an additional control dial and electronic viewfinders with more coverage than optical equivalents. DSLRs beat mirrorless for battery life. Firstly, let’s see if the SL2 stands its ground in its chosen category.

As a DSLR, the Canon EOS Rebel SL2 is very compact, to say the least, 122 x 93 x 70mm. The body is small enough to feel like you can carry it around all day. No problem for this unit to even act as a travel camera. The body is made of composite material and although it does feel plasticky, you forgive this knowing its price range. You get the usual Canon faux leather covering to help grip the camera body.

The buttons and dials are very Canon-esque in their layout. There’s one control dial, with the power on and off having its own dedicated button. The flip-out touchable rear screen is a great addition, helping with functionality such as selecting focus point, tapping to take images, and has Canons Feature Assistant.

The sensor is a 24MP APS-C, with a 9-point AF system. Video comes in at 1080/60p, all in a package weighing 453g. The camera has an Auto ISO system, very basic but at least it’s included. You can set the maximum ISO threshold only.

Being such a small body, the buttons are very small and don’t expect customization from them apart from the Q/Set button. Small buttons close together usually means they can be accidentally pressed in the heat of shooting. There is at least a custom menu where you can add your own specific items and can be the default menu. Phones and tablets can easily connect to the SL2 via Wi-Fi with NFC and Bluetooth. The Canon Camera Connect app isn’t the most feature-rich, but it does the job, even if sometimes a little slowly.

With this type of camera you don’t feel bad keeping it in fully automatic mode, but it’s also good to try out the scene modes to get some faster shutter speeds and a few other variations in settings. JPEG color is the usual Canon rich, with some softening at higher ISO levels mainly due to the inbuilt noise reduction. RAW files cannot be processed in camera, but there is scope for a stop or so to pull up shadows and highlights in post-editing.

When shooting moving subjects, the Dual Pixel AF system and Live View come into play. Tapping on the subject keeps them in focus at a reasonable hit rate. The tiltable rear screen helps keep track of the subject, becoming indispensable when you’re shooting video. As you would expect, the video functionality is basic with top quality being 1080/60p at 60Mbps.

Exposure compensation and auto ISO can be adjusted, with the inclusion of a microphone input and adjustment for audio levels. It may be more point-and-shoot than anything, that is really the game at this end of the market, where sharp, good quality footage is the only real focus.

The average SL2 user will probably spend most of their time in full auto mode. Functions like Scene Intelligent Auto chooses the mode for the situation. You can see which scene you are in Live View and the articulating three-inch LCD screen definitely helps with your composition.

Feature Assistant is very helpful with getting the basics right with things like shutter speed and aperture and lets you know what has been changed in each mode. Little hints under each bit of information is also a nice addition.

The Canon EOS Rebel SL2 acts as a great entry-level DSLR, small enough to feel unobtrusive carried around all day and just enough features to get good quality shots. The touch-enabled LCD screen also works well with subject tracking. Feature Assistant is a great way to learn how everything works from aperture to shutter speed. It will also tell you which buttons to press to gain full control of the camera.

On the surface, auto focus is limited with the antiquated nine-point system. It’s okay in single shot mode, but starts to fail quickly with moving subjects. Live View and Dual Pixel AF works far better, but you will have to go to a higher model if you want better tracking. Live View also significantly cuts down battery life, which also leads on to no USB charging, which would have been helpful in this respect.

Images from the Canon EOS Rebel SL2 are the standard commonly found from entry-level Canons. JPEG colors are good, with noise reduction at high ISOs. RAW files don’t have a great amount of dynamic range, but definitely usable in this category. Video controls may be basic, with footage being fine for its class. 4K would have been nice, but not missed massively. Dual Pixel AF and the touchscreen make up for things, making decent quality with what you have.

There’s nothing groundbreaking about this camera, but it can be recommended as a great starter all-rounder, with a small design. The camera works well in auto mode, with enough controls and help from the Feature Assistant to build on your knowledge. It’s not a groundbreaking camera, but it’s a solid performer and easy to recommend if you want a small and light DSLR that gives a flavor of its older siblings.

8
Score
The Canon EOS Rebel SL2/200D is a starter DSLR with a solid feature set. The camera has nothing groundbreaking, but is great for the beginner and those who want a fully automated shooting experience.