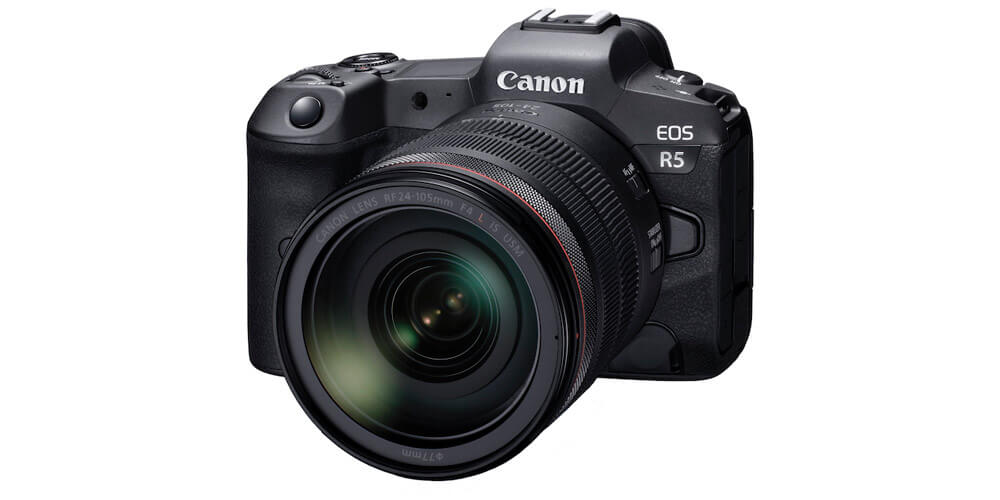 The long-awaited Canon EOS R5 was released in July 2020 and has raised the bar for full-frame mirrorless cameras. For a long time, Canon kept itself away from high-end mirrorless cameras. But with the EOS R5, it seems to keep up the pace with the transformation in technology and trend. Of course, Canon doesn’t want to repeat the same mistake Kodak did by not adapting to the market.

If you have ever considered switching from a DSLR to a mirrorless camera, the Canon EOS R5 offers you a perfect opportunity to make that transition.

In this review, let’s take a closer look into the photo and video capabilities of the EOS R5.

The first impression of the Canon EOS R5 is solid and looks similar to the EOS R and EOS RP. Its design takes elements from Canon’s top-of-the-line DSLRs and the EOS R. The compact and ergonomic body grips firmly to the hand and you can easily access the thoughtfully placed controls.

As compared to the EOS R, Canon has introduced a thumbwheel, moved the AF-On button closer to the viewfinder, redesigned the joystick, and removed the touch bar. Finally, after listening to the demands of many photographers, the EOS R5 is equipped with three dials, one each for controlling the ISO, shutter speed, and aperture.

The 0.5-inch electronic viewfinder (EVF) offers an amazingly realistic view with a resolution of 5.76 million pixels and covers about 100 percent of the image field. The EOS R5 is almost as good at color reproduction as the Nikon Z6 and Z7, which currently have one of the best viewfinders.

With the standard setting, the viewfinder image slightly lags with quick pans because the viewfinder does not run at the maximum possible frame rate. If you change the display performance option from Standard to Fluid in the camera menu, it ramps up to 120 frames per second. Then there is no delay even with fast pans, making the R5’s viewfinder an ideal choice for action shots. However, opting for the maximum frame rate takes a toll on the battery performance.

Like almost all new cameras, the EOS R5 has built-in Bluetooth and WLAN, which you can access through the Camera Connect app available for Android and iOS. Using wireless connectivity, you can control a large number of setting options on the camera remotely. The app also allows the transfer of the location data to the photos. The only catch is that the app must run when you need to record the location data, which drains the smartphone’s battery faster.

An upgrade in the EOS R5 is the further developed LP-E6NH battery. It offers a 14 percent higher capacity than the mechanically and technically similar LP-E6. More importantly, the battery delivers a higher current, which comes in handy while shooting in burst mode. You can use the old batteries, but these reduce the continuous shooting rate.

The Canon EOS R5 in Use

Thanks to the 45MP sensor, the photos from the EOS R5 are extremely sharp and detailed. In terms of image quality, it comes close to the EOS 5DS and clearly outperforms it at higher ISO sensitivities. The sensitivity range extends from ISO 100 to 51,200 without, and from ISO 50 to 102,400 with extension. The image quality only diminishes slightly in dim light at a higher ISO sensitivity; you can hardly distinguish the photos with ISO 1600 from ISO 100 in 100 percent view.

Since August 2018, Canon had been the only major camera manufacturer that did not offer a sensor-shift image stabilizer in its interchangeable lens cameras. This has changed with its high-end mirrorless models such as the R5 and R6.

Due to the stabilization of the axis of rotation, they are now even more effective than optical image stabilizers built into lenses, at least with low focal lengths and effective up to five f-stops for the shake compensation. In combination with an RF lens that has an optical image stabilizer, it goes up to eight f-stops. This means that even with an exposure time of half a second, you can take shake-free images with a focal length of 105mm. Only a few cameras can do that.

The EOS R5 has a dual pixel CMOS AF II autofocus system including the deep learning algorithms of the EOS 1D X Mark III. The precise subject recognition is particularly helpful, as it recognizes people from a distance, even if they turn their backs to the camera. As soon as the subject’s face is exposed, the camera locks its focus on the eyes with a high hit rate – perfect for portraits. The good thing about the R5’s subject recognition algorithm is that it works well not only with humans but also with animals.

In addition, the autofocus works in light conditions from EV -6 to 20, which means that it works with pinpoint accuracy even in the dark.

So is this the perfect autofocus system? Not quite. It still can’t compete with the autofocusing speed and precision of high-end DSLRs like the EOS 1D Mark III and Nikon D6 while tracking fast-moving subjects.

Despite being packed with several juicy features, if there’s one thing that keeps the EOS R5 way ahead of the competitors it’s video resolution. The R5 sets the benchmark as the first full-frame mirrorless camera that films in 8K. If you prefer to film in 4K, you will benefit from its 60 fps as compared to the 30 fps in 8K.

While few mirrorless cameras come close to the video quality of the R5, the sound quality of the built-in microphone is rather mediocre. If you want to reduce echoes, it is better to use an external microphone. The magnesium alloy body isn’t enough to dissipate residual heat, as the camera heats up quite often while shooting 8K. To cope with the high data transfer rates while shooting RAW in 8K, the EOS R5 is equipped with CFexpress and SD memory card slots.

How Does the Canon EOS R5 Compare?

The closest competitors to the EOS R5 outside Canon are the Nikon Z7 and Sony a7 III. All three are the flag bearers of their respective companies in mirrorless full-frame cameras. The viewfinder of the Canon EOS R5 outperforms its rivals by a decent margin. With 8K resolution, its video specifications look excellent on paper but don’t offer much edge in practice as it easily heats up and has a higher crop factor.

Overall, the EOS R5 is on par with the Sony a7 III by balancing their individual differences. On the other hand, it clearly beats the Nikon Z7 in core areas like processing power, autofocus system, video quality, and ergonomics, which justifies paying the extra $500.

With the EOS R5, Canon aims to target serious amateurs and professionals who are looking for a compact camera that shoots high-resolution photos and videos. This camera is likely to leave a hole in your pocket, but it also packs an excellent sensor, precise autofocus system, built-in stabilization, razor-sharp viewfinder, and a fast DIGIC X processor. With internal recording in 8K across the entire sensor width, the Canon EOS R5 sets a new standard.

There is still scope for improvements in EOS R5’s internal microphone, heat dissipation, and autofocus tracking, but with this model, Canon has laid a solid foundation for the future generations in this series.

9
Score
With the EOS R5, Canon has tried to pack the essence of the 5D Mark II into a compact mirrorless body. It has made a strong statement that Canon would not lag behind in adapting to the new trends – rather it leaps a step ahead.