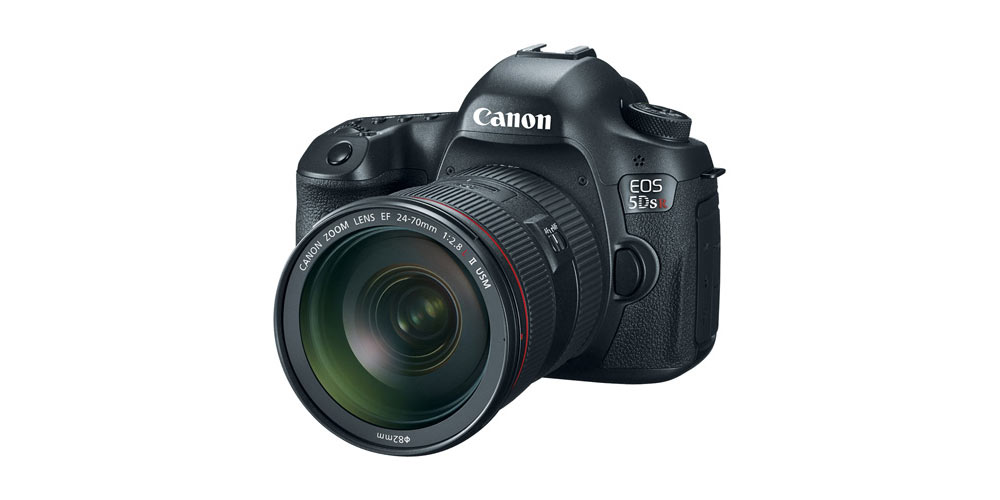 The Canon EOS 5DS R is a full-frame, high-resolution camera added to the 5D lineup alongside the 5DS both with a huge 50MP. The main difference between the 5DS R and the 5DS is that the 5DS R has a self-canceling filter and the ‘S’ an optical low-pass filter.

The Canon EOS 5DS R and S models line up alongside the Canon EOD 5D Mark III as releases. Both these new releases are intended as high-resolution counterparts to the 5D Mark III, aimed more at portrait, studio and other shoots where you need that extra resolution and are firmly aimed at the stills photographer, rather than video.

The body design is virtually the same as the Canon 5D Mark III with controls in the same place. This means that any Canon user familiar with the design can jump straight in and start using the camera with a minimal learning curve.

The body is made out of magnesium alloy and fully weatherproofed. The processor onboard is a Dual DIGIC 6 with a full-frame, 51 megapixels sensor. The left top side of the camera has the locking mode dial and power switch. The right side has the familiar LCD panel with dual button controls that can be used with either of the rotary dials.

Next to the LCD panel on the rear of the camera, there’s the AF-ON and AEL(*) and AF point selection buttons. The AF-ON and AEL buttons can also be customized. The layout is basically as Canon-esque as you can get. Although the layout may be the same as the 5D, functionality is definitely different in some areas and operation.

The maximum ISO is 6400 (expandable to 50-12800) which is quite low these days, still very usable up to quite low light scenarios. The mirror lock-up now has a motor mechanism, which means a preset delay can be added before the shutter.

The 150,000-pixel metering sensor from the Canon EOS 7D II has now been integrated. The information gathered can be sent to the autofocus system for better subject tracking, as with the ‘iTR’ (Intelligent Tracking and Recognition) mode.

Similarities with the 5D Mark III continue with the 61-point autofocus system. 41 cross-type AF points track both horizontal and vertical, to work better in low contrast lighting and for slow lenses. The five central AF points swap to dual-cross-type when using an f/2.8 or lower f-stop lens.

Canon users will be familiar with the AF point selection modes with Spot AF, Single AF, Expand AF area +, Expand AF area Surround, Zone AF and Autoselect 61 point AF. You can also disable any of these modes to make the selection process simpler in the heat of shooting. With a higher resolution sensor, the 5DS R should be able to meter and track subject better than the EOS 5D Mark III.

Continuous AF does a great job of tracking your subject and keeping it in sharp focus when it’s coming towards you. The iTR Multi Area AF works the best when your subject is quite well isolated, but with moving objects it struggles a little more. The system also works better with distant subjects, rather than things close up.

Arguably, Nikon’s 3-D tracking and Sony’s eye detection works a lot better. Sometimes, it’s better to use the traditional Canon AF selection point modes that you are used to.

Canon has a good reputation for their JPEG color rendition and the Canon EOS 5DS R follows suit. JPEGs are rich in color and well exposed, especially compared to its competitors. Sony may edge forward with details, especially at high ISOs.

RAW files can take advantage of the high-resolution sensor, but this also means that images are noisier at base ISO. With the 5DS R’s ISO range, this means that its optimal range is loads of resolution in reasonable controllable light conditions, like a studio.

Mirror induced shock has also been worked on with the new mirror mechanism and silent shooting modes. Canon has clearly put a lot of work into this area and along with image stabilization in Canon lenses and workarounds are there to get the cleanest possible images.

To completely remove any mirror slap you will have to go into Live View. You lose speed of focusing, but for carefully framed images like landscapes, it’s ideal. Silent shooting mode makes things a bit quicker, especially with IS and the new mirror-Up pre-delays.

When it comes to dynamic range, the Canon EOS 5DS R is noisier than the competition when pushed over 2EV and itself noisier than the equivalent higher ISO settings. This generally means that you need to get your ISO and exposure settings more on point in camera than its peers. However, it’s still an improvement over previous Canon models.

Although the video options seemed to come second in the pecking order on the Canon EOS 5DS R, they are worth mentioning. More or less the same features as found on the EOS 5D Mark III, up to 1080/30p and 60p at 720.

There is no focus peaking or zebra warnings to make it a serious camera for a videographer, but it’s got enough features and resolution for standard video needs. In other words, this is a very stills photography-centric camera.

The focus may be on stills photography, rather than video as there isn’t an HDMI output or headphone socket, but there is facility to shoot time lapse at 1080/24p brought over from the 7D II.

It may seem that the only benefit is higher resolution with the 5DS R, but there’s more to it than that. From the outside, it’s more or less the same as the 5D Mark III in looks and functionality which is a good thing, but it also builds in areas as a natural progression.

Some external features have been left out, such as the lever around the joystick from the 7D Mark II. Customization of the buttons is also limited compared to competitors.

The 61-point phase-detect AF system works well, definitely measuring up to the competition on a basic level, but subject tracking, especially with close-up subjects falls behind the competition.

So who will benefit most from the Canon EOS 5DS R? Landscape photographers can make use of the higher resolution but without much increase in dynamic range. For quickly tracking subjects in events or weddings, the system works well, but the subject tracking is not as refined as what you find on the Nikon or Sony.

The 5DS R is clearly aimed at someone wanting high resolution and has quite ideal lighting situations. Longtime Canon users may also like the increased resolution and the small upgrades across the board if you’re sticking with the brand.

If you have more all-around needs from the Canon EOS 5DS R, then there are definite workarounds, you just need to be aware beforehand that it definitely has a niche.

9
Score
The Canon EOS 5DS R has excellent resolution and is the same in looks and functionality as the 5D Mark III. The 61-point phase-detect AF system works well, definitely measuring up to the competition on a basic level, but subject tracking, especially with close-up subjects, falls behind.