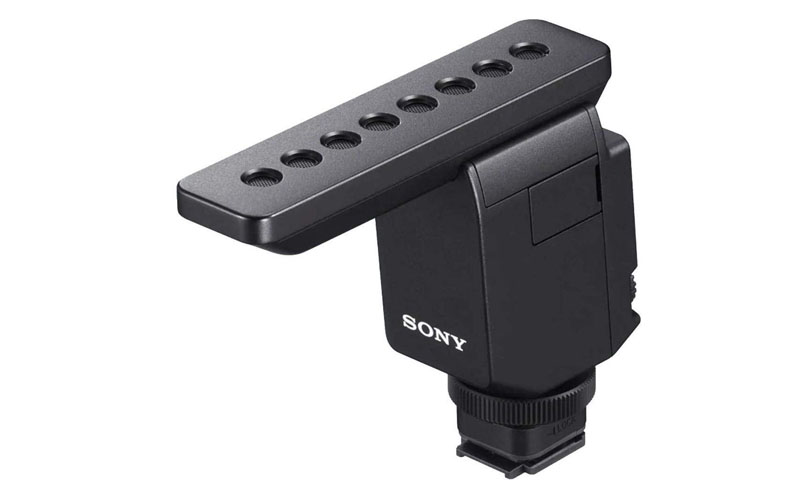 The Sony ECM-B1M has a multitude of characteristics that make it the ideal shotgun microphone for Sony cameras. Released recently with the Sony a7 IV, the next generation of Sony a7 cameras, this shotgun microphone is a surefire way to record quality digital auto through its built-in digital audio interface. The digital auto interface allows for the Sony ECM-B1M to communicate with a Sony a7 camera directly through the multi-interface shoe.

Fear not if you have a different model of Sony camera, different Sony cameras can utilize this microphone as long as the camera has a selectable digital/analog output feature. If you’re in search of a Sony camera, one of the best priced Sony cameras to pair with the ECM-B1M is a Sony a7.

Do not look any further for a Sony shotgun microphone, especially if you have a compatible Sony camera. The ECM-B1M is the highest quality shotgun microphone for all walks of video production enthusiasts. Those who need to record an interview, family event, vlog, and any other kind of video subject will find themselves floored with the audio quality that this shotgun microphone provides.

The Sony ECM-B1M has eight high-performance mic capsules and advanced digital signal processing. These right mic capsules work alongside with a new beamforming algorithm that provides sharp directivity and rejects sounds from an off-axis origin. An entirely lossless audio recording experience is achievable with this product due to its direct digital audio interface.

Audio with the Sony ECM-B1M is directed through the multi-interface shoe into a Sony camera with no degradation in the sound quality and zero transportation noise that is often found to be underlying in the background with lesser quality shotgun microphones.

The high-performance mic capsules along with the advanced digital signal processing allow for Sony’s device to provide three options of directivity patterns.

The mechanical noise suppression would also work to reduce audio transportation noise from cables, however, because the Sony ECM-B1M has no cables, there is no transportation or degradation to reduce.

Sony ECM-B1M in Use

The Sony ECM-B1M comes with a low-cut filter that finds, identifies and eliminates subsonic noise through digital signal processing. This same low-cut filter built into the shotgun microphone also maximizes the recorded audio at the starting stage and reduces the need for complex post-processing in the editing room.

Controls with the Sony ECM-B1M cover a wide range of any desired adjustments to the recording levels. It also comes with an analog output, covered above, that would allow this device to be compatible with other Sony cameras that do not have a digital audio interface.

The Sony ECM-B1M comes with attenuator control to easily adjust and set optimal signal levels. All-in-all, these controls continue to reduce the need for post-processing when all the audio and video is cut together in the editing room.

There are virtually no worries about the installation of the ECM-B1M. Simply plug in the microphone and play. The plug-and-play feature of this microphone eliminates any concern of driver installations, technical communication mishaps between the Sony camera and microphone, and the undesirable process of troubleshooting connection errors.

Do you need to prepare with a few additional purchases of extra batteries for the Sony ECM-B1M? Definitely not. The Sony ECM-B1M does not use or require any batteries to operate. It simply attaches to the multi-interface shoe and is ready to go. There is also no need for external cables that would otherwise come with a risk of disappearance, like the Rode Wireless GO compact microphone system.

How Does it Compare to Competitors?

The Sony ECM-B1M has several factors that set it apart from its competitors and make it the clear choice to take. This shotgun microphone does not require cables, batteries, and comes with both analog and digital recording options. It also comes with a windscreen and a pouch, often the standard for microphones, but it is still appreciated.

Anyone who purchases a Sony ECM-B1M will find themselves more than pleased with the shotgun microphone’s quality audio and quality construction. The ability to select from three different patterns of directivity and to adjust the attenuation with ease, on top of the previously mentioned qualities, is what makes the Sony ECM-B1M the shotgun microphone of choice for Sony cameras.

Purchase a Sony ECM-B1M today and the audio quality within videos recorded with it will improve dramatically. There’s no question to the fact that an upgrade to the Sony ECM-B1M will have noticeable improvements to the audio quality with its high-quality microphone capsules, advanced digital signal processing, and direct digital audio recording through a multi-interface shoe.