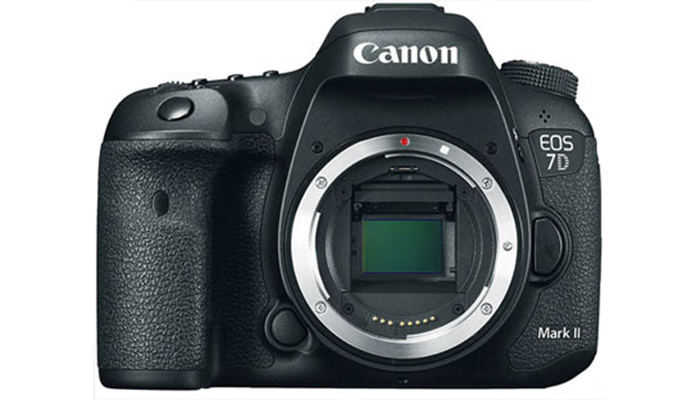 A classic may be a strong statement for the Canon EOS 7D Mark II, but just like the 5D, the original 7D had pro-level features, with the 7D all wrapped around an APS-C sensor. However, time and technology move on and those who loved the all-around abilities of the 7D needed an upgrade to build on its predecessor and make the most of the latest features in the market.

The Canon EOS 7D Mark II on the outside is more or less the same as its predecessor, just weighing slightly more at 910g (2.0 lb) compared to 860g (1.9 lb) on the older model. The external layout is more or less the same, now with the button locations almost mirroring what you see on the Canon 5D Mark III. The similarities of the layout are so you can swap between one camera and another model and feel right at home.

The button layout will be immediately familiar to any Canon user. The main control dial behind the shutter button changes things like aperture, shutter speed, and swaps between the functions of the top plate four buttons. The M-Fn button can also be customized and is also a great way to swap between the different AF modes. The top three buttons used for white balance, autofocus, drive types, ISO, and Flash compensation are still in their useful locations.

On the other side of the camera, the mode dial has the familiar three creative settings, bulb, manual, Aperture priority, shutter priority, program, and fully auto. Thankfully, it now has a ‘lock’ button. I’ve forgotten the number of times I’ve accidentally knocked the mode dial while in the heat of shooting. On that side of the camera, you now have a Rate button (for ‘star’ rating images) and image effects button for accessing picture styles and image effects and the ability to compare images.

The live view and movie mode button are in the same place, the Q button for controls while shooting is now on the right side and a new ‘AF area select’ thumb switch wrapped around the older mini joystick, allowing you to move between AF area modes (You have to activate it after pressing the AF point selection button). These being AF area selection mode, AE Lock, AE Lock Hold, AF point and center, ISO, and Exposure Compensation.

The Canon EOS 7D Mark II now has a 20MP APS-C CMOS sensor, with dual-pixel AF and an increased upper ISO range of 100-16,000, expandable up to 51,200. The autofocus system is inspired by the Canon 1 DX, now with 65 AF points, all cross-type with dual cross-type for wide aperture lenses, with horizontal and vertical detection. The center point down to EV -3 is comparable to the 5D Mark III.

There’s also the integration of RGB and IR metering sensor, along with ‘Intelligent Tracking and Recognition’ (iTR) great for subject tracking. The menu system has also been simplified to take into account these new autofocus upgrades. All this basically means faster and more accurate than before. The system has also sped up autofocusing in Live View and with movie autofocus, the caveat being the autofocus in movie mode only works with STM motors or USM lenses after 2009.

There is no touchscreen on the Canon EOS 7D Mark II and the rear screen is static and in place. The touchscreen you may be able to do without, but it would have been a nice addition to have a tilting rear screen for those extreme angle shots or even video.

One needed upgrade was an auto ISO with additional settings. You now have the options to set in the upper and lower ISO limits and minimum shutter speeds before ISO is increased. You can set this to either manual or auto. The shutter speed amount is in seven increments, which is better than Nikon’s five and can be adjusted with 2/3 EV increments. The basic auto ISO on the original was fine for when it came out but has quickly dated, so this expanded functionality is such a needed asset.

What I want from an upgraded 7D are a greater all-rounder and faster response. Firstly, the Mark II doesn’t disappoint with its iTR and expanded AF point range. The iTR is pretty good at tracking faces and subjects but can lag a little at times. Dual-Pixel AF works well in live view and is especially helpful when shooting video. However, you can’t use it when shooting continuously.

This camera is fast at 10 frames per second and coupled with the phase detect autofocus, the camera is able to track and focus on moving objects very well. iTR can keep up with tracking quite well, maybe not on the level of Nikon’s 3D tracking, so you will have to experiment with your subject matter and which metering modes you use.

With RAW files at base ISO the dynamic range is acceptable and equivalent to the 5D Mark III, but not as good as the competition. The dynamic range is definitely an improvement over the original, but you will still find some noise if you really push the EV levels. I wanted super fast, super quality and super dynamic range, but sometimes you cannot have your cake and eat it.

You get more options for video formats on the Canon EOS 7D Mark II with 1080p available at 60, 50, 30, 25 and 24fp and true NTSC 23.97 and 24fps, just no 4k. It records with an H.264/MPEG-4 AVC codec and can output to either .MP4 or .MOV files. The addition of Dual-Pixel autofocus is a great addition on the video side of things, a possible game changer when you’re thinking of upgrading, something that’s made its way into Canon’s cinema cameras. The only caveat being that recording in 60p/50p you lose Dual-Pixel autofocus and Servo focus.

The smart new feature is the Silent Control which uses the inner ring of the thumbwheel to control positions and access settings. You have to physically enable this feature and it does act as a second-best to not having a touchscreen.

The Canon EOS 7D Mark II has a built-in microphone, but it’s mono and really only good for tracking. There are a 3.5mm stereo mic and headphone jack, but nothing to write home about. You can also output 4:2:2 8-bit video through HDMI.

How Does the Canon EOS 7D Mark II Compare?

The Canon EOS 7D Mark II has lots of upgrades, which definitely make it functionally a better camera than the original. The resolution has only been marginally increased, but you do get a very fast 10 frames per second shooting speed and the autofocus and 65 cross-type sensor mean that it can cover a lot of different shooting scenarios.

JPEG processing has definitely been improved, with better noise handling and banding in raw files significantly reduced. However, I would have expected a better dynamic range at low ISO levels.

Video quality is only slightly better than on the original, but there are additional tools and functional options to get the best of your footage.

Overall, the Canon EOS 7D Mark II is a worthy upgrade to the original, with lots more functionality. If you predominantly do action photography and want an ultra-fast tool without spending the money on a 1D X, the 7D Mark II can fit the bill. Same for if you are upgrading from the original 7D. If you want the ultimate in dynamic range and image quality, you may have to look elsewhere. The Canon EOS 7D Mark II, just like the original, is a very good all-rounder and I think that is its main purpose.

9
Score
The Canon EOS 7D Mark II is a worthy upgrade from the original bringing more functionality and features to market as a great all-rounder. It may not have the ultimate image quality and dynamic range as some of the competitors, but it's definitely up there in speed and autofocusing.