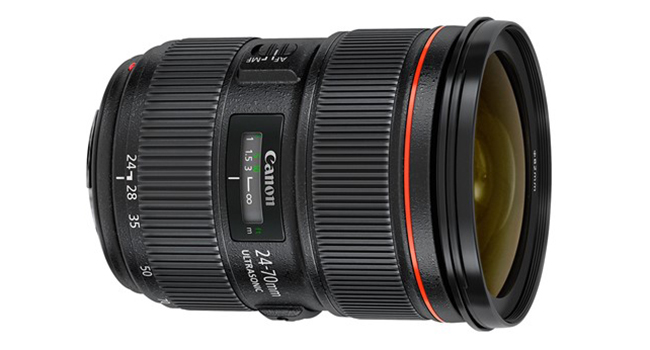 The Canon 24-70mm zoom is quite the workhorse lens, being a go-to for most applications. It’s not too wide angle, not too telephoto, and wide open can cover most applications. The camera was originally released in 2002, with the Canon EF 24-70mm f/2.8L II USM update in February 2012, bringing in a new lighter design with better optics. This hopes to reduce some of the distortion found on the earlier model, with more robust weather sealing.

Having Canon’s veritable red line around the lens means a high-end lens built for full-frame bodies. However, the lens works equally well on crop sensors which works out to have a 38-112mm view. There’s a lot of glass in this lens with 18 elements in 13 groups, two ultra-low dispersion (UD) glass elements, and a Super UD aspheric element to counter chromatic aberrations. Canon’s standard ultrasonic motor is in place with the option of a manual override.

Highlights of the Canon EF 24-70mm f/2.8L II USM include f/2.8 – f/22, Ring-type Ultrasonic Motor (USM), 0.19x magnification, and 0.38mm minimum focus. Plus, it works with all Canon bodies. The old version felt and weighed the same as a tank, with this upgrade being lighter at 805g, but still feeling very robust.

The Canon EF 24-70mm f/2.8L II USM almost feels like a simpler design than its predecessor, but everything is more or less laid out the same. There is a big manual focus ring up front and the zoom ring is closest to the camera body. Looking down the lens, you have a focus mode switch for manual or autofocus, a focus scale, and a zoom lock switch that was not available on the previous version.

Zoom works in a more conventional way on this upgrade with the lens being the shortest at 24mm. The older model gave more shading at the telephoto end of the scale, almost back to front to most zoom lenses. The original hood has now been replaced by a petal-type hood.

Waterproofing is also upgraded from the previous version, with a rubber O-ring around the mount. The filter thread has increased in size from 77mm to 82mm. The filter thread also doesn’t rotate when focusing, meaning polarizing filters and the like should be easier to use. A clear omission is that of image stabilization which has apparently been left out as it would compromise the quality of the lens, according to Canon.

On a workhorse lens such as the Canon EF 24-70mm f/2.8L II USM, fast autofocusing is key. The top-end camera bodies handle this lens just fine, but there have been reports of the 650D having inconsistencies. Live View focusing is definitely slower, but not unmanageable. As with shooting any video footage, the AF motor maybe heard on your soundtrack when focusing, so bear this in mind.

In most tests, the sharpness of images is consistent throughout the zoom range – even at the extremes – being very good. You will get some barrel distortion at the widest angle and chromatic aberration, but, depending on the camera you use, this can be tweaked in post–editing the majority of the time. The lens doesn’t operate as well in macro, which ultimately means that you would choose another lens for extreme close-ups. The sharpest is going to be at f/5.6-f/8 on a tripod for any types of close-up, even trying manual focus.

The Canon EF 24-70mm f/2.8L II USM fares very well with flare. With so much glass in a lens like this one they are susceptible to flare, but across the range it copes with intense light very well, better than you would expect. Vignetting is shown the most at 24mm wide open. It’s not unpleasant, but it is there. This can be corrected in post-processing with DxO Optics Pro or Adobe Lightroom. Bokeh is very nice at the telephoto end and at 2.8 with background blurring being more pleasing than you would expect with a zoom lens.

If size and weight are key, then a Sigma 24-70mm f/2.8 EX DG HSM could be an option at 790g. However, when you’re buying lenses at this end of the scale, the best compatibility is usually key or, in other words, when you have a high-end Canon body you will usually go for a similar Canon lens. But this also depends on your budget.

Canon’s flagship zoom lens, which is meant to be an everyday workhorse, has to deliver in all areas and does so with great quality. The Canon EF 24-70mm f/2.8L II USM provides sharp images across its range, is fast even when wide open, with distortion and chromatic aberration very low. You do get vignetting on full-frame cameras, with the most extreme at f/2.8, but you can easily correct this with post-processing. The better the camera it’s attached to, the better the results, with fast autofocusing across the range.

Being the workhorse it needs to be, the build quality and weatherproofing definitely give peace of mind when you’re out in the elements. The downside is it’s not the sharpest close-up or great with the autofocusing at this range. In practice, those faults are not so much a hindrance as you will probably opt for a dedicated macro lens for close-up work. One thing to bear in mind if you are upgrading is the change in filter thread size to 82mm.

9
Score
Image quality is the overriding factor above its competitors, but you're going to have to pay for the best. It's more expensive compared to the Sigma 24-70mm and the Tamron SP 24-70mm. If you already have a Canon body and want the best in image quality for an everyday zoom lens, the Canon EF 24-70mm f/2.8L II USM is the top of the heap.