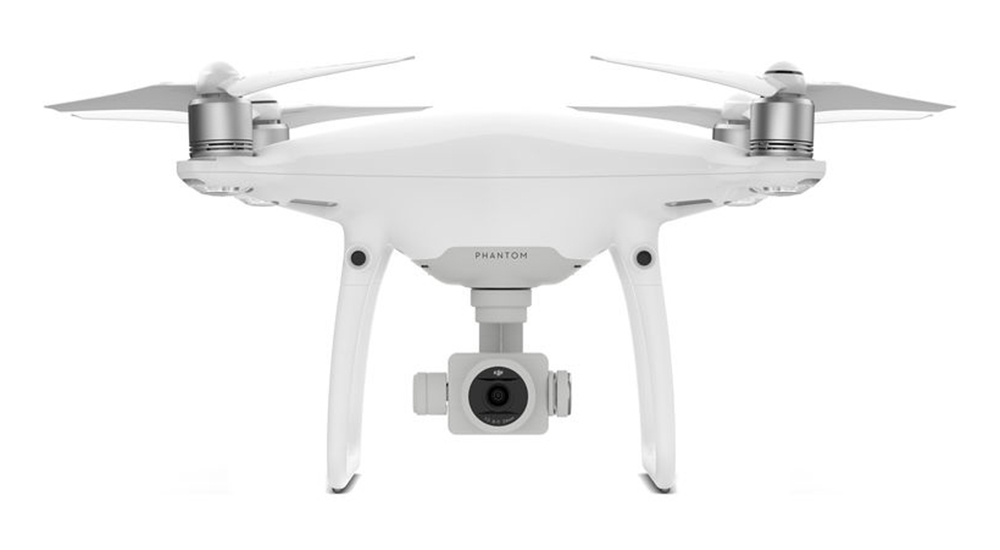 The DJI Phantom 4 is a true “everyman” drone. Or at least it is an apt option for “every man” that is willing to pay DJI’s consistently steep prices. The price of this unit may be restrictive but the performance certainly is not.

It handles well enough for pilots of every skill level to enjoy. The camera itself is also outstanding. Though it doesn’t quite rival the camera you get with the Phantom 4 Pro, very few users will be able to tell the difference.

It also features a good battery life, excellent sensors for safe, stable flying, and a sleek compact design that looks great, and lends itself well to storage and transportation.

In short, the DJI Phantom 4 checks almost all of the key boxes. Today we will explore the features of this drone in a little bit more detail to see if it is right for your needs.

Nothing about the design concept of the DJI Phantom 4 defies drone convention. It is an attractive unit—sleek, with four propellers extending out from the compact body via short arms. Beneath each arm, there are small, low-profile sensors that keep the drone stable and safe.

The camera is mounted beneath the drone and protected by legs that extend out from under it to ensure that when you land, the camera doesn’t actually make contact with the ground.

The dimensions are compact and great for transportation or storage. The DJI Phantom 4 is sized at 15 x 8.7 x 12.8 inches and it weighs a little over eight pounds.

The remote is also pretty basic. It features a compact controller with two joysticks, and a mount for placing your phone. The screen of your phone is how you view the display of the drone.

All in all, the appearance is pretty standard. The Phantom 4 looks great but ultimately doesn’t stray much from traditional drone design.

Now that you have a good grasp of what the DJI Phantom 4 looks like, it is time to examine some key features. Let’s take a look.

Battery life is a true make or break component of any drone. For good reason. Even really great drones don’t often have a very long battery life.

The battery life that you get here is about 25 minutes. The company advertises 28 minutes, but our experience with the product had it closer to 23 minutes. Of course, do keep in mind that this figure is more an estimation than it is a guarantee. Outside conditions will ultimately have a significant impact on how long the drone runs for. For example, windy conditions can significantly diminish the runtime of a drone. Still, you should expect it to run somewhere between 23 – 28 minutes for each charge of the battery.

You can also purchase additional batteries to keep the unit going for longer. While the battery runtime is great in the broad world of drones, it is somewhat average for products of this price range. High-end units typically clock in at around 25 minutes, which is right on par with what you get here. Some may go as high as 35 minutes. Still, the time frame that you get here certainly doesn’t leave very much to complain about.

When we talk performance, we largely mean how the drone handles. What is the flying experience? In the case of the DJI Phantom 4, the flying experience is really quite good. The sensors provide a very intuitive experience. Autonomous flight modes, such as “subject tracker,” make it easy to let the drone more or less fly itself. The case of that mode specifically allows you to identify a subject, and have your drone follow it in close proximity to take footage. If you want a more hands-on experience, that is also certainly an option. Pilots are also free to use take the controls over themselves.

The nice thing here is that the possibility of a collision is extremely minimal. The drone features object avoidance software that always errors on the side of caution. Sometimes to a fault, in fact. The drone will sometimes “refuse,” to fly in areas that, in reality, are surrounded by several feet of clearance

The object avoidance feature is ultimately a good thing though. With this component of the drone, you won’t need to worry too much about doing serious harm to your drone.

Last, but not least, let’s talk about the drone camera. As we have already mentioned, the camera quality that you get here is very impressive. The drone is able to capture 4K video and features stabilizer technology that ensures a smooth view in most conditions.

It features a range between 30-120 frames per second. Ultimately, the camera leaves almost nothing to complain about. There are better cameras out there, but as mentioned earlier, the difference is quite arbitrary. Let’s compare the Phantom 4 to the Parrot ANAFI.

The price is going to be the biggest issue that most people bump up against. It is true that there are drones out there with some higher-end features. It is even true that DJI makes some of them.

However, it is also true that the majority of people won’t be able to see any difference. The video and image quality is superb—even if there are some options capable of images that are slightly more superb.

The same is true of the battery, the handling, the sensors. Virtually everything that you get from the DJI Phantom 4 leaves very little to complain about. It works as well for the person that is looking for a fancy toy as it does for the buyer looking for something that they can use for serious videography.

The bottom line? If you have the money, the DJI Phantom 4 is going to be a good place to consider spending it.

8
Score
The DJI Phantom 4 is a high-quality drone with features that will suit a wide range of users. While it's battery life is only ok, and its camera can't quite keep up with some of the other drones on the market, shortcomings are small and rare.