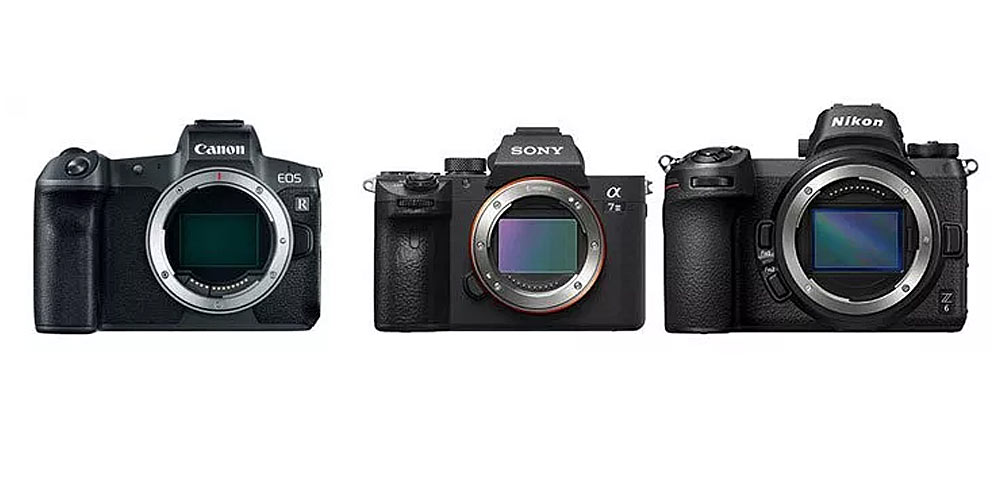 First there was one, now there are many. This is the case with the mirrorless camera market where the Sony a7 had dominance for over five years, making some interesting and innovative moves and allowing the format to be more accessible to the masses. Now, the market has more competition with the Canon EOS R and Nikon Z6, both competitively priced around $2000 and both having their own assets. Each of these models here are very capable cameras, providing high-resolution images, but each has their own foibles and operate slightly differently under different conditions.

A major consideration when choosing your camera body is the range of lenses you currently own. Will my existing lenses work on this mirrorless camera? Can my lenses work on a different brand of camera body? In theory, Nikon lenses can be adapted to work on Sony camera bodies. EF lenses work fine on the EOS R, plus on the Sony a7 III, making Canon’s EF lenses arguably the most flexible. The other caveats are dedicated lenses for crop sensors, which won’t work the same on a full-frame sensor body. The nice point here is that there are possibilities for changing between one brand and another.

Canon is slowly catching up with primes and zooms and their own dedicated lenses in a 24-105mm f/4, 35mm f/1.8 and 50mm f/1.2. Nikon’s lineup is similar with their 24-70mm f/4 being the best performer and ironically, the primes coming in second. Sony also has a heads up sharing its mount specifications, which means third-party lens makers can now start producing their own mirrorless designs.

These are all young designs, so in reality, many people will be using either what they own or have tried and tested before they take the plunge into each system’s dedicated lenses.

Each of these mirrorless camera designs has similar features to an extent, but as with any new platform they’re still working out what works and what doesn’t. The Sony and Nikon are both 24 megapixels, while the Canon has a 30MP Dual Pixel sensor. Not a huge advantage for the Canon, but enough to differentiate in certain shooting circumstances. Battery life goes to the Sony, which has roughly twice the amount of life of the Nikon and almost three times that of the Canon. The Sony can be powered up over USB while it is being used, while all three can be charged over USB.

The Canon and Nikon seem to like the retro top-plate settings and displays while the Sony has more control dials. Build quality is solid with a decent level of weather sealing, with the Nikon just edging out here. They all have touchscreens and AF points that can be selected on screen, but the Canon and Nikon have the best controls and options in this area.

All have movable touchscreens, which should be featured on any camera model, but here Canon and Nikon have the better resolution and the best response. Build wise, each of these cameras feels extremely solid, with nice ergonomics and controls. Now it’s to see how each camera produces its images in different scenarios.

Sony’s eye detection is one of the best out there, doing a fine job of tracking a subject. Canon’s Pupil Detection probably comes in second but is only usable in single AF. Nikon has Face Detection, but it’s not as fast or accurate as the other two. Sony’s eye detection makes it a winner in the AF Department or if your main subject matter is people portraits.

The Sony can track the best, but it’s then the Nikon which probably deliver the best shooting speed, with the Canon being just a touch behind. The EOS R works well in low light, especially with a 50mm f/1.2, while Sony’s Eye-AF can’t be beaten for accuracy.

More compact design isn’t just a weight saving for stills photography, but also for video. All three cameras here do 4K video, but it’s only the Canon that uses a 1.83x crop. The Sony and Nikon both use the complete 16:9 range of the sensor, with features like zebra warnings and focus peaking. The Sony and Canon can shoot in 8-bit Log footage. The Nikon also allows different exposure settings for both video and stills. The Canon can do the same, but without white balance and doesn’t have in-body stabilization. If your leanings are towards video, then Sony’s E-mount has pro-level video lenses, making this a clear favorite.

Which Mirrorless Camera Is for You?

Sony has definitely had a head start in the mirrorless camera department, having products out for five years ahead of the other two. Sony’s cameras and lenses feel more mature than what Nikon and Canon have now, but they are catching up fast.

All three produce fantastic images, but it’s the Sony that has the more robust AF system and possibly the best all-rounder. The Nikon does well with video and surprisingly doesn’t have the best AF system. The Canon is a capable all-rounder with decent AF, just not the greatest with the video.

Buying into the mirrorless sector of the market will depend on many factors, such as what lenses you currently own and past brand allegiances. Like any camera body or lens, it’s an idea to try and borrow or rent to try out each for a period of time before you commit. You can then see which fits your personal type of photography and specific needs.