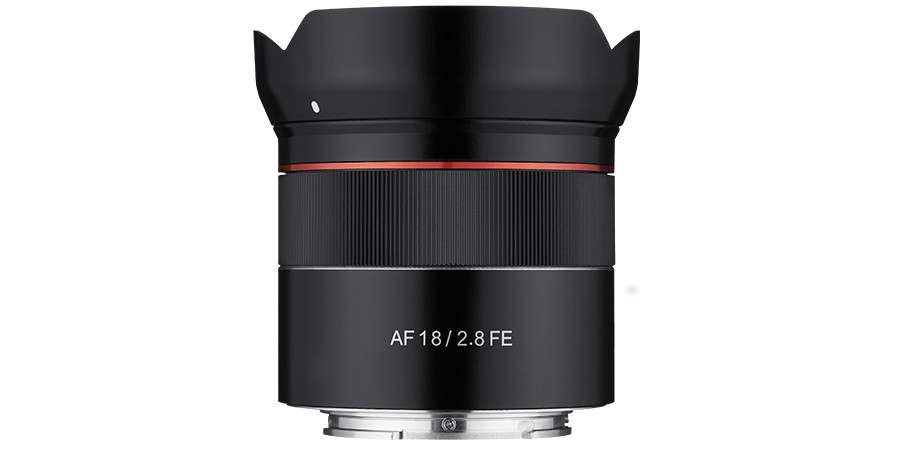 A South Korean based manufacturer of camera lenses, Samyang, has launched an ultra-wide-angle ultra-compact lens for Sony full-frame mirrorless cameras. The company has announced the AF 18mm f/2.8 FE lens which is designed for Sony’s E-Mount camera system. The new 18mm f/2.8 lens is said to be “the most compact, lightweight, and affordable” super-wide-angle full-frame Samyang lens for Sony E-mount.

Samyang has over forty years of experience in manufacturing optics across multiple industries and has a range of prime lenses which feature large aperture optics and excellent build quality. They are capable of delivering extremely sharp high contrast images. The new ultra-compact AF 18mm f/2.8 FE lens is a super-wide-angle lens which is the first of its kind from Samyang and the eighth in its series system lens line-up.

According to Samyang, the lens features a “stepless” motor which consists of a metal mount and a glass-strengthened composite material that helps to reduce weight while increasing durability. The company describes the lens glass as enabling high sharpness, contrast, and clarity with minimal distortion.

Samyang is not new in the business of making lenses with amazing technologies and still continues to grow its offering of lenses for Sony E-mount cameras. With the introduction of the new AF 18mm f/2.8 FE super-wide-angle lens, the company has managed to squeeze in a linear STM autofocus motor which it says provides fast, quiet, and accurate focusing.

The new product announcements from Samyang have been quite well received thus far, and there is not much else out there that can beat them on price. Expanding their offering of lenses for Sony E-mount cameras with the introduction of the AF 18mm f/2.8 FE ultra-sharp zoom lens will amount to a big boost for Samyang in the market.

Weighing in at 145 grams (excluding the hood and cap) and being only two inches long, the Samyang 18mm f/2.8 ultra-sharp zoom lens is a compact, lightweight lens — the first of its kind from the company. It features a wide-angle to portrait focal range that goes from 14mm all the way up to 85mm.

The new Samyang 18mm f/2.8 ultra-sharp zoom lens offers full-frame coverage with a maximum aperture of f/2.8 which enables it to deliver quality images. It is furnished with up to a 100-degree field of view when used on Sony’s full-frame mirrorless cameras and impressive all-round autofocus performance.

The Samyang 18mm f/2.8 was designed with nine ultra multi-coated elements that are arranged in eight groups. These include three Aspherical lenses, two High Reflective lenses, and three Extra-low Dispersion glass elements which help to minimize distortion and optical aberration, even at 18mm.

In addition, the new lens offers a minimum focus distance of 9.8 inches, as well as a fast, accurate and quiet linear STM motor which is responsible for its smooth focus performance. Its seven rounded aperture blades add an artistic touch to pictures taken with the lens which expresses star-like rays more clearly and beautifully.

Excellent images can be created using this lens because the frame of the lens is compact and solid – since it is made of high aluminum alloy. Also, flare and ghosting can be minimized by sheltering the lens from unnecessary light. It comes with a detachable petal-shaped lens hood and a front filter with a diameter of 58mm.