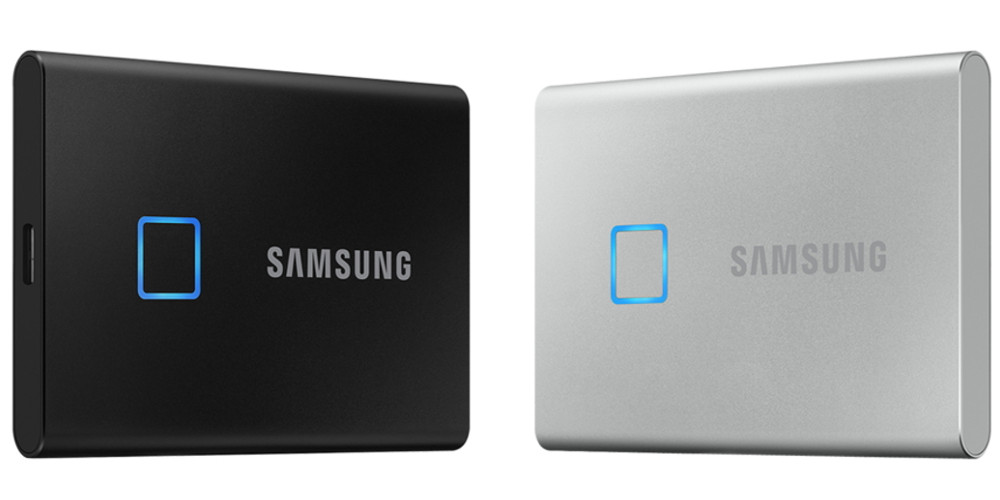 Samsung Electronics has launched its “next-generation” Solid State Drive (SSD) that it calls the T7 Touch. The super fast and portable SSD T7 Touch incorporates additional features for enhanced security and speed. This is a follow-up product to the popular Samsung T5 portable SSD.

Unlike SanDisk who only teased its drive, the Samsung T7 Touch is an actual product that users can put to the test. The T7 Touch brings a huge speed improvement over previous external hard drives. Going by the USB 3.2 Gen 2 standard, it is said to have the fastest transfer speeds currently available.

According to Samsung’s Mike Mang, the new portable SSD T7 Touch will appeal to users who are continuously transitioning between work, play and other personal projects and want a way to securely convey their content material with them.

The new portable SSD ensures that data is secure because of the fingerprint recognition functionality integrated into the product. It also delivers industry-leading transfer speeds in a compact design.

Features and Specs of the Portable SSD T7 Touch

Designed for both Pros and enthusiast-level users alike, Samsung’s T7 Touch provides adequate, durable, and safe storage, whether you need to store huge numbers of snap-shots, games or 4K/8K motion pictures whether on a computer, tablet, phone or even a game console.

The new “Touch” version of the T7 takes transfer speeds to the next level. Samsung’s new portable SSD is about twice as fast as its predecessor, the T5, and as much as 9.5 times faster than other external HDDs. It offers a really fast read speed of 1,050MB/s and an impressive write speed of 1,000MB/s.

The compact SSD features a backward-compatible USB 3.2 Gen 2 that enables it to achieve maximum transfer speeds as high as 10Gbps. You can access its max transfer speed by using it with the NVMe interface.

The new storage device goes beyond speed improvement. It also enhances data protection by incorporating a built-in fingerprint scanner as an extra hardware security measure — the first of Samsung SSDs to feature a built-in fingerprint reader. In addition to using password protection, this portable SSD adds a level of encryption too with the AES 256-bit hardware encryption similar to that in Lexar Pro SL100 Portable SSD.

There’s also a ‘Motion LED’, which enables consumers to quickly confirm the status of the storage device with one glance. Regardless of the hardware additions and solid aluminum housing, the new portable SSD weighs in really light at just 58 grams.

To ensure that users can always easily connect wherever they may be, the SSD features a USB Type-C-to-C cable and a USB Type-C-to-A cable. Furthermore, it is compatible with Android, Windows, and Mac operating systems. The T7 Touch also comes with a 3-year limited warranty.

For more information about the Samsung T7 touch or to get yourself one, head over to Samsung’s product page.