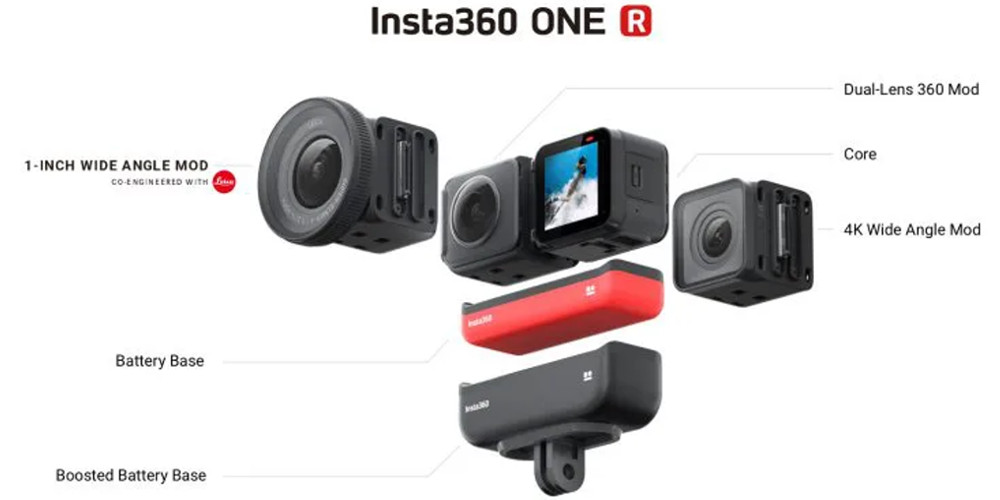 Insta360 has finally released the Insta360 One R adaptive modular action camera that it had teased earlier. The 360° action cam company, Insta360, co-engineered its latest modular creation with the German camera giant, Leica. The new Insta360 One R features a unique modular “interchangeable lens design” that allows the use of various modules.

The Insta360 One R has a very simple three-parts design – one part contains the processor, the second part is the screen, and the third is the hot interchangeable-lens Mod for various lens modules. You can use a standard 4K camera module, 360-degree video module, 5.3K with a one-inch sensor module, and more. This is one of the best 360 cameras on the market.

The new super versatile Insta360 One R was revealed at the CES 2020. It provides a means to efficiently combine a “core” processing unit with various useful modules. The concept of the new action cam is really simple – one processor, one battery, and a bunch of “quick-swapping lens Mods.”

According to Insta360, the One R instantly “transforms from a dual-lens 360 shooter to a standard action cam.” With this modular design, the Insta360 One R stands to replace many cameras. The GoPro HERO8, even with the producer’s new Media Mods that allow attachment of mics and lights, don’t seem to stand a chance against this Insta360 One R’s versatile modular design.

The Insta360 One R Comes in Several Mods

The 4K Wide Angle Mod, for instance, shoots 4K/60p video and eight times slo-mo at 1080p resolution. When using the Dual-Lens 360 Mod, users can get the same shooting capabilities as the Insta360 One X. It shoots 5.7K video and relies on the company’s excellent FlowState stabilization to provide smooth footage. The one-inch Wide Angle Mod, which was co-engineered with Leica comes with some really cool capabilities too. It can capture 19MP photos and record 5.3K videos using Leica’s optical engineering.

The Insta360 One R is also looking like a tough action camera despite its modular design. It is waterproofed to survive down to five meters underwater and has an optional Dive Case that can enable it to survive a dive down to 60 meters. But that’s not so impressive, anyway, as rivals like the DJI Osmo Action and the GoPro HERO8 can go twice as deep underwater even without a case.

As common with Insta360 action cams, all three cameras of the One R packs special shooting modes too. There’s the Auto Frame for 360-degree videos which automatically picks out the most interesting frames. Also, Deep Track subject tracking, voice control, and FlashCut auto-editing.

Insta360 has also announced a couple of upcoming Mods for its new modular action cam. In the future, users can get the Booster Battery Case to make the battery last twice as long and an Invisible Selfie Stick, that is automatically edited out in 360-degree videos.

There’s also going to be an Aerial Mod on which users can attach multiple Insta360 One R Mods to a drone and then make the drone itself invisible in the final edit.

All three cameras do not come as one in the box. Instead, Insta360 is giving users the flexibility of creating whatever action cam system they prefer by providing various One R bundles. The base-level One R camera that comes with only the 4K module and goes for $299.99. There’s an Insta360 One R Twin Edition that adds the 360-degree camera and is to sell for $479.99.

And then, the third version brings the premium 5.3K one-inch, Wide Angle Mod – which, according to Insta360, “achieves the best ever performance in an action camera” – sells for $549.99. All three bundles are now available worldwide.