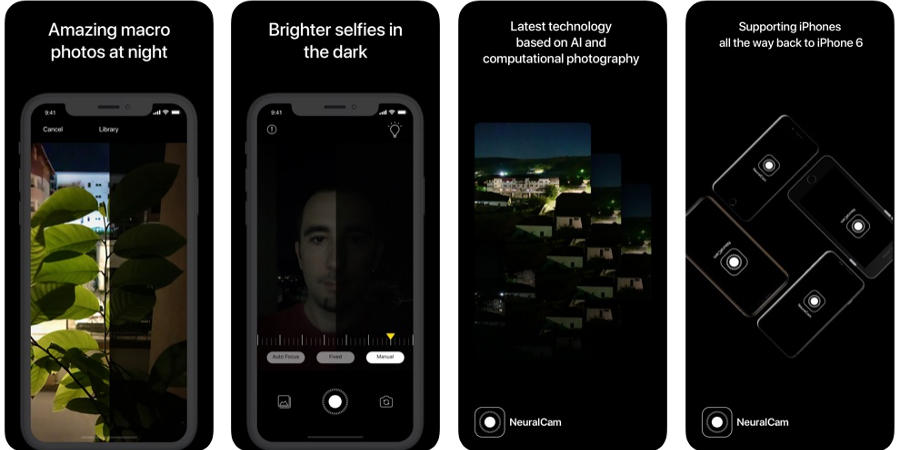 iPhone users can now capture fun moments at night as a new night mode app is launched for iPhones. Halcyon Mobile has just launched NeuralCam Night Photo — which is a mobile phone app that brings night photo capabilities to iPhones.

Halcyon’s NeuralCam Night Mode camera app is no different from similar apps in terms of function and technique. It uses AI and advanced computational photography technology to combine several exposures into a much cleaner and brighter low-light photograph. The app enables users to shoot very bright and noise-free pictures even in very poor lighting situations where your default iPhone camera ordinarily cannot capture anything of value.

Apart from NightSight from Google, various Android mobile phones have offered users impressive Night Mode features. For some reason, the mobile phone tech giant, Apple, has not been able to keep up with its Android counterparts in the area of low-light photography.

Even though there are rumors of Apple bringing night mode photography features to its iPhones this year, many think it might be built into its hardware. With the NeuralCam night mode app, millions of iPhone users can get a camera update without an actual hardware update.

The Neural Cam Night Photo first appeared on Product Hunt some days ago, where it quickly rose to the top as the number one product of the day. There you can find a few sample photos that were captured with the new app that show pictures of with-and-without the NeuralCam Night Photo app.

NeuralCam will enable iPhone users to take brighter selfies at night. It is also great for getting brilliant photos of landscapes and cityscapes around dawn, dusk, and in low artificial light settings without professional photography skills or gear.

Halcyon Mobile’s NeuralCam is also backward compatible which means that owners of current-generation iPhones and even older iPhone models can now participate in night time photography with the power of AI — anyone can run it even with a model as old as an iPhone 6.

In addition to NeuralCam’s backward compatibility, a major catch for this new night mode app is the resolution of the resulting images. Those using an iPhone 6 can get images with 1.2 megapixels (1280×960) resolution and it gets better as you go up the iPhone models.

How to Use the NeuralCam Night Mode App

Using NeuralCam is pretty straightforward — just point and shoot. Just as you would when using any other night mode picture app, the NeuralCam Night Mode app requires you to hold your camera in place for a few seconds after you take the shot.

It takes around 10 to 15 seconds to complete capturing and processing the image before you get the final output. Note that it works best on static subjects and in the absence of any major movement in the frame.

The app comes with some in-built selfie lighting for when you want to take a photo in pitch-black. The company says that you don’t need a flash to take a photo in the dark. Some parts of the app UI lighten in order to illuminate your face better than a flash would do.

Additionally, you don’t need to open an account as all image processing takes place on your device. You can instantly share images with friends, on social media, or simply view them later from your phone gallery.

Although NeuralCam works with both front-facing (selfie) and back-facing cameras, it doesn’t support the front-facing camera on the iPhone 6s and 6s Plus. It also takes more time to process images on older models like the iPhone 6 or iPhone 7, due to the smaller processing power and may show different results in different settings.

You can learn more about the app on the iOS App Store where you can also download your copy of the app for your iPhone for $3.