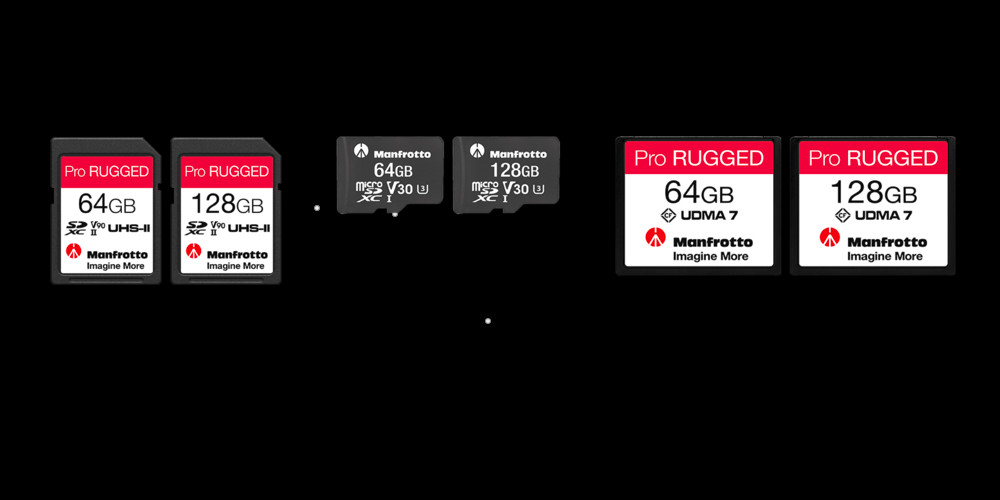 The Italy-based manufacturer of tripods, bags, lighting supports, and several kinds of accessories, Manfrotto, has ventured into the memory card market. The company has introduced a fresh line of Pro Rugged memory cards. Manfrotto claims that its new line of SD cards, microSD cards, and CF memory cards are the strongest memory cards on the market.

According to the company, the new Pro Rugged memory cards are very resilient against the odds of nature. This strongest-memory-cards claim places the new Manfrotto memory cards as direct competitors to Sony’s series of Tough memory cards — which Sony also says are the strongest currently available on the market.

A 128GB microSD card can serve for still photography, even for an extensive RAW shooting session. However, CF cards are no longer popular with filmmakers and a 128GB SD card is considered not enough.

Manfrotto’s fresh line of cards seems to be for pro photographers. They feature a one-piece, solid molded design pattern that helps to seal off internal components from unnecessary contact with nature. They all skip connector ribs and write-protection switches which helps to keep liquid and foreign debris away.

Manfrotto says its SD cards are three times tougher than traditional SD cards. While the CF cards can withstand impact from 35kg/77lbs of force, the SD and microSD cards are able to take 20kg/44lbs of impact force. But Sony’s claim is way bigger, as its cards are said to be 18 times stronger than ordinary SD cards because they are bend-proofed to 180N.

When it comes to speed, the Manfrotto Pro Rugged memory cards come in 64GB and 128GB versions that use high-speed NAND flash memory. The SD and microSD cards have read/write speeds of 280/250 MB/s and 90/90 MB/s respectively, while the CF card has a read/write speed of 160/130 MB/s. Sony’s Tough SD cards, by comparison, are capable of 299/300 MB/s.

Manfrotto says that its new memory cards are reliable as they offer industrial-strength with unrivaled speed. They provide pros with the toughest SD cards on the market and are designed to ensure optimum performance from any camera gear that they are combined with. This makes the Pro Rugged Memory Cards an essential accessory for every photographer.

The new range of Manfrotto Pro Rugged memory cards can be shopped for directly from the Manfrotto website. Their retail prices are as follows: