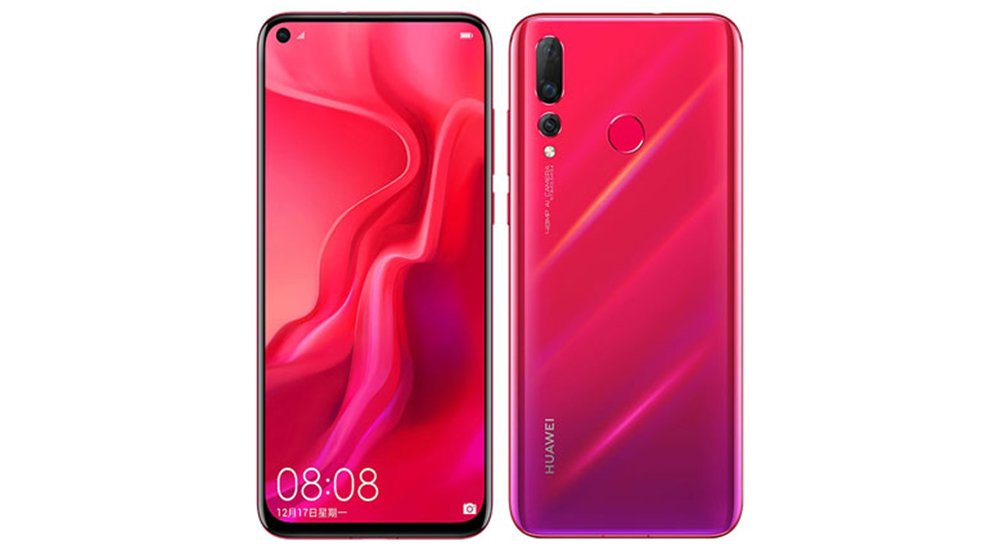 Huawei has launched its new smartphone Nova 4 after several weeks of speculations and teasing. The most prominent feature is a circular cut-out for its 25 MP selfie camera. The front-facing selfie camera is implanted in its 6.4-inch (2310x1080px) IPS LCD. This is coming about a week after Samsung announced its very similar Galaxy A8s. Although, the camera hole for Nova 4 is smaller than that of the Galaxy A8s.

Honor, Huawei‘s online-exclusive sub-brand, partially announced a similar View 20. The View 20 shares lots of similarities with Nova 4. They both have a 48-megapixel main rear camera and in-display camera design. However, Huawei Nova 4 differs from Honor View 20 with its Kirin 970 processor. Honor’s upcoming phone will use the newer Kirin 980.

The company’s flagship device comes with a 6.4-inch (2310 x 1080px) display. It has a RAM of 8 GB, 128 GB internal storage capacity and a fingerprint sensor mounted on the back. Using a 3,750mAh battery, the phone supports 18W fast charging over USB-C. It even has support for standby dual 4G VoLTE connection.

The phone’s earpiece is found at the edge of the device housed in a micro-slot. There’s also an indicator light at the top edge. It comes with 2-megapixels sensor at the bottom for Bokeh f/2. Huawei Nova 4 is available in various colors including Red, White, Black, and Blue.

The introduction of the notched design to phones was innovative. Smartphone manufacturers hoped to greatly increase the display size of their phones. It worked. The design has been improved upon too. And now we have the teardrop notch design with in-display camera which helps smartphone brands to really maximize the screen-to-body ratio of their phones. With the specs of Nova 4, one can say that the Huawei is positioning the Nova 4 as a very strong camera smartphone.

The smartphones will be on sale from 27th of December. Good news is that they are available for pre-orders on the company’s Vmall e-commerce site.

Huawei’s phones have done exceedingly well in markets around the world. The company’s smartphone sales hit the $200-million mark in 2018 which earns it second place as the world’s largest smartphone seller. To celebrate the success, Huawei has announced special memorial editions of Mate 20 Pro and Nova 4. Huawei’s president, He Gang, published this announcement along with the design of the special editions on his official Weibo account.

Huawei is poised to continue in the path of success with its latest mid-range powerhouse which is the Nova 4. The special edition phones will be available in markets around China from January 1, 2019.  We await more details about the prices.