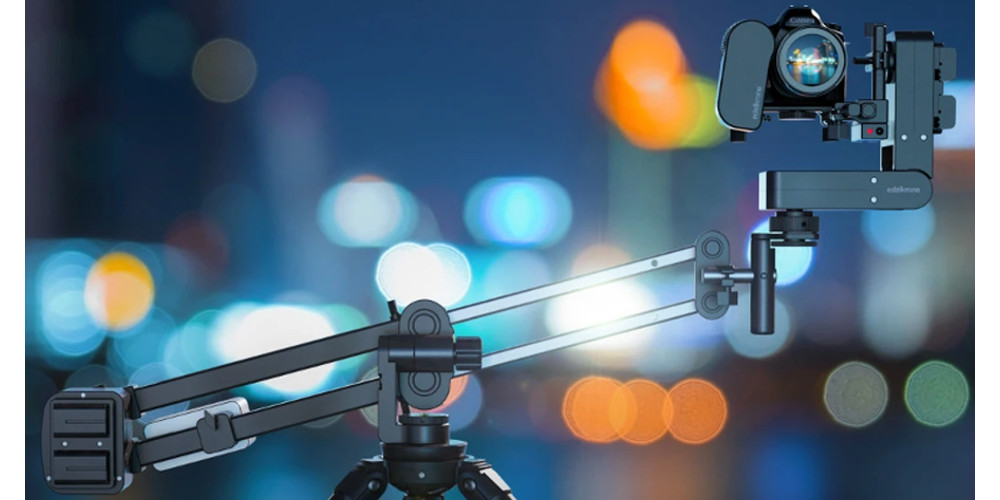 Edelkrone, a popular producer of super-portable film gears with small form factor, has added a new compact jib to its offer of portable jibs. The company has recently launched a new app-controlled, motorized, portable camera jib that it dubbed the JibONE.

This mini-jib packs some really important features and specs that will really thrill filmmakers looking for great motion control devices. It promises to deliver smooth, silent operation; its movements can be programmed or controlled manually; app integration is also supported.

The new camera jib is motorized, which implies that you can achieve whatever shots you want without having your hands on it. However, you can also choose to operate the new JibONE by hand.

Here’s is a video introducing the JibONE.

The JibONE offers huge flexibility. Edelkrone’s latest smart camera jib is easy to mount on all tripod heads. With the jib, you can keep your camera fixed in a forward-facing position while moving vertically, horizontally or diagonally at any angle. All you need to do is set your camera’s pan & tilt angle using a tripod head and the JibONE will keep to that angle while taking perfect motion shots.

Features and Specs of the Compact JibONE

The new JibONE supports 50cm / 19.6in of both horizontal and vertical motion in any direction, including looping motion. In addition to using it for both vertical and horizontal panning, you also get a blend of both axis at every 22.5 degrees point to enable you to capture some diagonal footage as well.

Despite its many capabilities, Edelkrone says the jib model is compact enough for easy carriage in a backpack. It is a really compact jib too, measuring 61 x 17 x 15cm / 24 x 6.7 x 5.9in when folded and weighing 5.5kg / 12lbs when used with the 1kg / 2.2lbs counterweight.

Featuring a solid build that combines CNC machined aluminum and stainless steel, the JibONE promises to be very sturdy and reliable. However, Edelkrone advises that users should limit their setup load to less than 5kg / 11lbs.

When it comes to power, users can choose either of two different battery options available for powering the JibONE – either LP-E6 batteries or NP-F batteries (a powerful battery used in Sony a7S II. Of course, battery life varies depending on which battery options a user chooses.

For instance, when you power the new JibONE with two Canon LP-E6 14.4Wh batteries (which implies a total of 28.8Wh), you can expect the jib to function for two hours straight even with continuous operation at full speed. It’s possible to shoot up to 12,000 still photos with this battery when you use it in time-lapse mode.

Compatible with Other Gears

The Edelkrone JibONE is also compatible with all of the company’s motion control heads, including HeadONE (both single and dual) and HeadPLUS. With this, users can easily turn the portable jib into a full-service motorized motion control device that pans, tilts, and cranes to explore more functional possibilities and capture a variety of shots. The company has also said that the JibONE is compatible with all DSLR camera models.

On the connectivity front, the JibONE comes with Bluetooth LE which allows users to control the jib directly from any iPhone running on iOS 11 or later versions. You can also connect Edelkrone’s latest jib with your Android smartphones running version 5.0 or later.

Another cool thing about this new Edelkrone JibONE is that it seamlessly pairs with the Edelkrone app. And once paired, the mobile app provides a simple user interface that allows you to easily record poses, adjust speed, and manipulate many more settings. It also enables you to capture extra-smooth, loopable motion that could really serve for interview shots and b-roll materials.

And with the Edelkrone app, you can easily program movements that you wish to repeat, which is very important for filmmakers trying to capture time-lapses or highly choreographed action sequences. You can also control your camera pose, acceleration, and speed.

Availability and Price of the JibONE

You can get yourself an Edelkrone JibONE now from Edelkrone. It was set at an introductory price of $1000 but is currently unavailable at $1300.