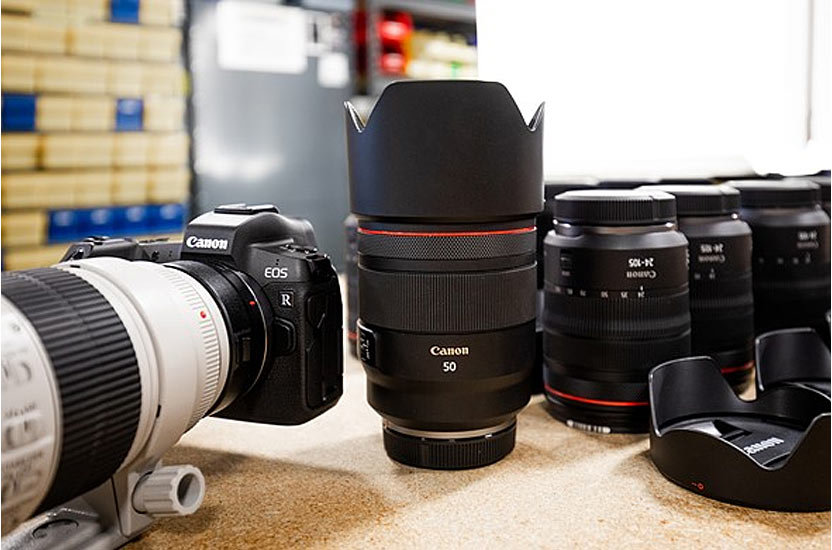 I have to admit that the slightest thought of taking one of my lenses apart, even un-doing one of the screws, fills me with dread. In that regard, you have to give respect to the guys at LensRentals, especially Roger Cicala who pulls apart a Canon RF 50mm f/1.2L USM lens for our insight and enjoyment.

Clearly, the guys have much experience in repairing a lens or two, tearing them down and getting them back into perfect working order, but it’s still a process I’d rather watch than take part in. The Canon RF 50mm f/1.2L lens is the latest technology in the Canon lens range, taking over from the long-standing EF range, so this disassembly seems like new territory even to the LensRentals guys.

‘Usually, I start to tear down posts with a joke about ‘those of you who are following along by disassembling your own lens at home’. Well, no joke today; this is not a home disassembly project. I’m not really sure it’s even a LensRentals disassembly project. But we got our tools out and boldly went where we probably shouldn’t have gone.’ So, this lens breakdown is a venture into the unknown for everybody, even more so if you’ve never seen a camera lens stripped down to its nearly bear components. Its also a great way to see how the new RF lens, compares to the old, what’s stayed the same and what we are exactly going to be buying into.

With a brand new series of lenses from Canon, you’re going to expect some new surprises internally. The guy started by opening up the front of the lens with the surprise of multiple off-center screws. A completely new arrangement here, so best left alone to disassemble the rear of the camera before moving forward.

A few side screws were loosened to take off the rear baffle, a feature common to other manufacturers but Canon usually uses a snap-on version. A few more heavy duty screws removed, then the bayonet mount. Some heat transfer tape is lifted up, then a rear spacer, some electrical shielding, to reveal the PCB. There are more electronics on this board with a lot more flex connectors, implying more current running through this lens than older models. Stands to sense as Canon is promoting the lenses to be faster with better communication between lens and body.

Losing a few more screws releases the rear outer barrel to reveal the largest version of Canon’s USM motor, the same as found on the new Canon 400mm f/2.8 IS III. The Canon RF 50mm f/1.2L has a lot of glass to move, so it makes sense to have a larger motor. (I wonder if the same motor will be used across the Canon range or just on this lens…)

Respect goes out to the guys at this point, as I cannot help but think when I dismantle furniture and always have a few screws spare or even table leg, this would be the process if I dismantled a lens in any way. In other words, leave jobs like this to the professionals, especially with lens repairs. Anyway, onto the meticulous lens breakdown…

The focus motor assembly next comes off, showing the focus ring position sensors and a focus-by-wire lens. A feature that is said to be more accurate than old-school mechanical focus. Take the AF motor assembly off and it’s nearly down to the inner optics. A long focusing throw shows accurate focusing and the big motor is there to shift all that glass backward and forward faster than before.

After releasing a tensioning spring, the front lens barrel was removed to show the stripped down optical core of the Canon 50mm f/1.2L RF lens. One thing they discovered here is that the replacement of the filter ring is no easy job, so you will have to take extra special care with the front-end of these new lenses unless you want a costly repair job.

When it comes to the optical core of this lens, it’s a lot smaller than expected. ‘Like a shaved cat, it’s always kind of shocking how small the core of the thing is.’ There’s no furry outer shell on this lens, but you get the point.

Due to time constraints and not wanting to venture into unknown territory without possibly breaking the lens, this is as far as the strip down went, but Cicala did reveal some new aspects to the RF lens. These new lenses have new optics and even a new mechanical system. Basically, lots of things different than the traditional Canon EF lens lineup.

It’s clear that Canon has put a lot of time and investment into the new R system, which has probably been years in the making. As he states, ‘We also saw lots of new stuff we don’t completely understand yet and a level of complexity we weren’t expecting.’ Shows a new way of doing things from the Canon line up.

It’s clear that the new lens impressed Cicala and his team enough to look further look into the Canon EOS R system. This generally implies that there’s going to be some exciting lenses on the horizon coming from Canon with a faster, more accurate optical system. Anybody who’s already invested into the Canon lineup or thinking of doing so, it looks like there could be exciting times ahead on the lens front.