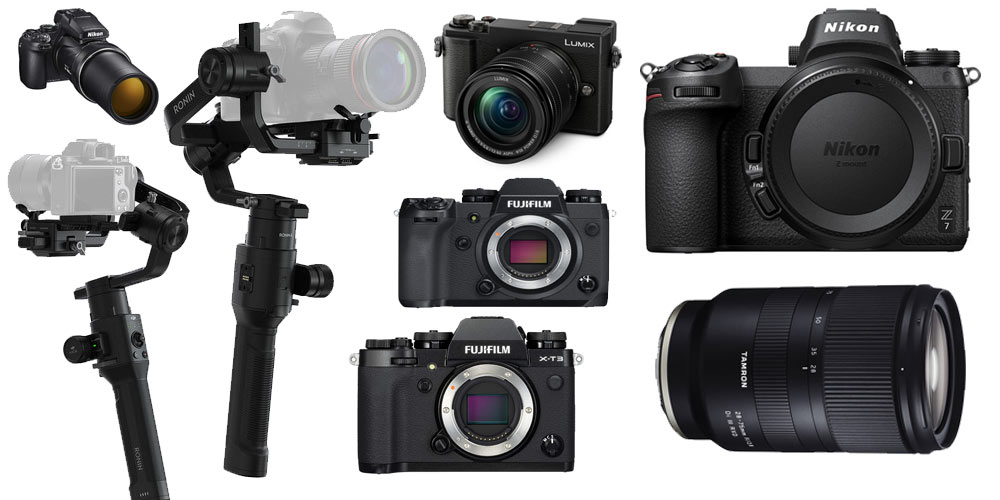 When it comes to the best photography gear of the last couple years, there were a few releases which were significant in the camera and lens world. Mirrorless designs are proving ever more popular and lenses which can take advantage of these new designs are now popping up. If you also want to lump in camera accessories and even the latest smartphone cameras, you’ve got quite a lot of kit to cover.

This list is not an exhaustive list, but it highlights some of the best photography gear standouts from 2018 and what these products could indicate in the coming years.

The DJI Ronin-S gimbal is an ideal companion if you’re shooting loads of video on your camera. Image stabilization can make the difference between some amateurish footage and professional results, along with fluid movement meaning you have to have something like this in your kit bag. If you’re planning on shooting something commercially, in this respect you want something that is built to last, works every time and gives you ultra-smooth movement through every scene.

The unit can be handheld or used on a tripod and has the ability to use different settings on the gimbal to get the action you want along with remote camera operation. Most importantly, it is a solid piece of kit which is very easy to use and operate, making the shooting experience that much more pleasurable and straightforward. Well worth the money for solid build, functionality, and operation.

The Panasonic Lumix DC-GX9 continues the trend of design which harks back to the old rangefinder cameras. The DC-GX9 is greater than the sum of its parts as it addresses many of the issues with the previous GX85. It’s a compact, lightweight design which is a joy to use all day long and features like the tilting viewfinder make extreme angles that much easier.

There are cheaper models on the market, even for image quality, and there are better cameras out there which handle video, but it’s a great all-rounder one that is a pleasure to use, which is the point here. It may not be at the level for a paid gig, but as a secondary camera or a lightweight alternative, it’s a great contender. Ease and a joy to use are factors when it comes to camera kit, and this is why the GX9 slots in so well.

If you are shopping around for a lens to fit the Sony E-mount, then a third-party lens is a likely option. The Tamron 28-75mm f/2.8 Di III RXD stands out in that it links up with the autofocus very well, especially Eye-AF, is fast and covers the most often used zoom ranges.

It’s an ideal fit for the Sony as it better than their own 24-70mm f/4 at the same price point, with the Tamron also being f/2.8. It’s also lighter weight than Sony’s own offering, 886g compared with 550g, and smaller. The Tamron doesn’t have image stabilization, but Sony bodies do, making this a great combo especially for video. In a roundabout way, this all means the Tamron 28-75mm f/2.8 fills a nice gap for a fast, cost-effective zoom lens that works extremely well on a full frame Sony.

Nikon, just like Canon, found their footing in the full-frame mirrorless sector in 2018, along with updating their lens mount systems. EF and F mounts are being superseded and it’s also interesting to see how these mirrorless designs stack up against DSLR equivalents.

The weight factor is a big bonus in a mirrorless design, especially if you’re used to carting around a heavy DLSR all day long. The compact design requires an electronic viewfinder which is excellent on the Nikon Z7, comparable to a high-end DSLR. There are some limitations when it comes to the autofocus, such as in low light conditions, which means in the worst cases you have to go to manual focus.

New cameras mean new lenses and the new line of S lenses are extremely sharp and with adapters, you can still use F-mount lenses. With 46MP you get a lot of resolution, but as a complete package along with autofocus, it’s still not as good as the D850. That being said, it’s definitely close considering its small form factor and it’s definitely a contender. Essentially, with some reasonable light, great images without the weight.

Fujifilm X-H1 and X-T3 for Video

As our still cameras are expected to now be part-time video devices, it’s worth mentioning some models that stand out on this front. Both the Fujifilm X-H1 and X-T3 are compact enough to not feel a burden being carried around all day and have some lightweight lenses. Having two memory card slots also can differentiate between stills and video footage.

You can achieve great, sharp, stabilized footage which may not have the same level of readouts as a dedicated video unit, but things like highlight warnings are enough for exposure. There are clear differences between the two models, the X-T3 doesn’t have in-body stabilization but can shoot in 10-bit Log, while with the X-H1 is able to use all of its sensor with video footage. The X-H1 crops in 4K.

The main forte of these two models is that it makes your workflow simple if it centers around swapping between stills and video. Many of the stills parameters can be transferred over to video, allowing you more emphasis on the creative process.

This is a pick for a few reasons, one being it’s ridiculous zoom capabilities, but the other being a bit of nostalgia from one of the first digital cameras I owned – a Sony DSC-F717. The Sony was a do-it-all camera, with a large zoom range and a cool, tilting body. The COOLPIX P1000 tries to pack everything in but its forte is its 125X, 24-3000mm zoom range.

Having a zoom range from pretty wide to being able to zoom into Saturn (exaggeration…) is definitely impressive, but what it does do is give you more range of creativity, focusing on things you would never think of in the past.

This much zoom range, as with other long zooms, needs a lot of stabilization and can pick up lots of haze in the atmosphere. You need a very sturdy tripod to handle the long lens, but you then you have to work with the smaller sensor to dig out as much detail as possible. It can take RAW files, which is advisable to get the most detail but also don’t expect the level of detail as you would from a dedicated high-end DSLR.

So much zoom range is loads of fun, giving you scope to experiment. Don’t expect the ultimate in image quality, resolution or detail, but you forget about this when you’re happily snapping away finding ever more distant objects to capture.