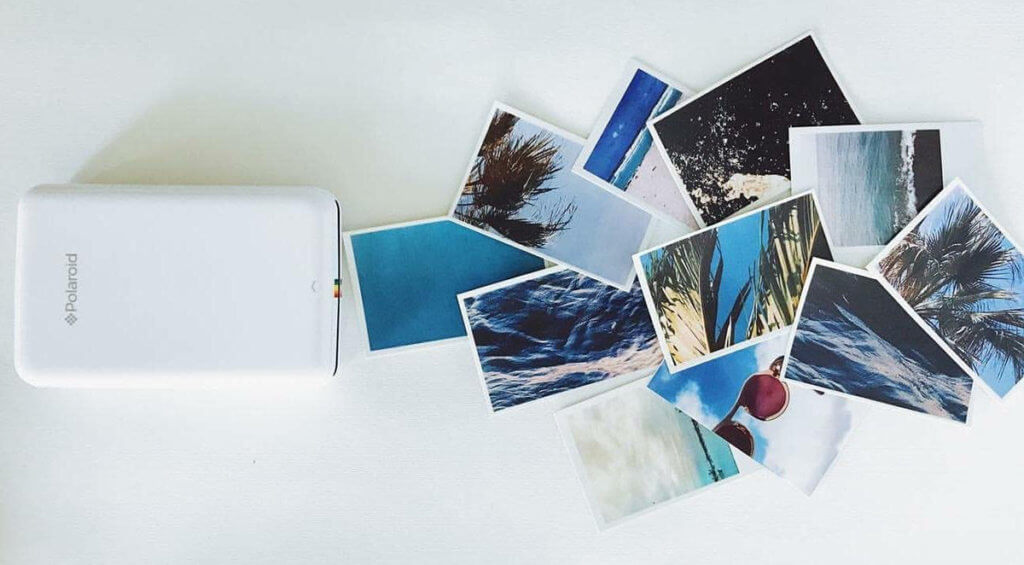 Before you decide to buy a portable photo printer, there are a few things you should know about. It’s a competitive market with a lot of devices being introduced every year. Most of them are very similar to one another. So the best among them depends on personal preferences.

In addition, these portable photo printers output the picture prints of a small size – usually, they are of the size of a credit card. So, if you are looking for larger prints, you should probably arrange for a large-sized professional photo printer or get them from a local photo lab.

Also, our list below includes the portable photo printers that use an app, so your options are limited if you are planning on printing from your laptop using these printers. With these things in mind, let’s take a look at some of the Best Portable Photo Printers.

The 2nd edition of the HP Sprocket is a tiny device, weighing less than half a pound, but it still has a lot to offer. It uses Zink based printing, so there is no need to worry about changing ink cartridges.

The Sprocket has an app, which allows you to edit and customize photos on your phone before printing. The photo paper of the printer has a sticky back, allowing you to turn your memories directly into stickers.

The small-sized HP Sprocket does come with some limitations. You will get photos of only 2 x 3 inches out of this printer. It connects with your phone via Bluetooth, but there is no option for Wi-Fi connectivity.

Unlike the HP Sprocket, the Polaroid Zip’s wireless connectivity option isn’t only limited to the Bluetooth, but it also offers NFC compatibility and promises a printing time of 60 seconds.

It outputs the same 2×3 size photos as the HP Sprocket, uses the Zink based printing, and its photo paper also has a sticky back. The printer has its own app developed by Polaroid, which allows you to edit and customize the photos before printing them.

The Kodak Photo Printer Mini has a beautiful look and is arguably one of the best portable photo printers around. You have the option to choose from three colors: black, white, and gold.

Unlike the photo printers above, the Kodak Photo Printer Mini doesn’t use Bluetooth connectivity, but instead, it comes equipped with Wi-Fi and NFC printing features. Although Wi-Fi printers aren’t considered as advanced as some Wi-Fi controlled light switches or thermostats, they are useful.

Also, you will get the photo prints with a size of 2.1×3.4 inches, which is slightly larger than the prints from the HP Sprocket and the Polaroid Zip. The app for the Kodak Photo Mini not only provides customization and editing options, but it also has the ability to freeze still pictures from videos.

The Canon IVY Mini is available in a variety of color options. Its sleek design and state-of-the-art features make it one of the best portable photo printers on the market. It employs Zink printing and outputs 2×3 inch prints. The printer has its own app with editing and customization features.

When you connect the IVY to your phone, it allows you to print photos from social media.

The Canon Selphy is larger in size than the other options presented in this list so far, but when it comes to quality it’s one of the best portable photo printers. Its extra size not only brings along the best photo quality but also the ability to print standard 4×6 photos as well as 2.1×2.1 square prints.

The Canon Selphy uses dye-sublimation as opposed to Zink printing, which means you will get crisp photos that will last long. With this printer, you will have options to take the prints via Wi-Fi and SD cards. It also allows you to take prints from a computer (via USB). Therefore if you need a great portable printer that isn’t only limited to the photos on your phone, the Canon Selphy can be a handy choice.

The Pickit M2 Portable Photo Printer has the size of the HP Sprocket and the Canon IVY with some state-of-the-art features from the Canon Selphy as it makes use of the dye-sublimation instead of Zink printing.

It uses Pickit’s own app which provides customization options. The printer features both Wi-Fi and NFC connectivity options and delivers the prints with a size of 2.1×3.4 inches, which is about the same as a credit card.

The Prynt Pocket is one of the most unique portable photo printers on the market. It uses ink-infused thermal paper with an adhesive sticker backing, to print the photos. The printer uses augmented reality within its app.

It brings along similar features as the other portable photo printers on this list, but it has one disadvantage: it can only be used with an iPhone. The iPhone is placed into the compact unit and attached via the Lightning connector. After that, the companion Prynt app is downloaded from the App Store and you are good to go.

Like the Canon Selphy, the Kodak Photo Printer Dock produces high-quality 4×6 photos when you dock your phone on the printer. The printer also charges the phone t the same time, which is an added bonus.

The Kodak Photo Printer is portable but it needs to be plugged in to print. Therefore you will have to find a wall outlet to make prints of your photos.

It features a companion app, USB and Wi-Fi printing as well as SD card compatibility. Before buying this printer you must take note that the dock is only designed for Android phones, so the iPhone users will have to use the adapter or they can connect via USB or Wi-Fi.

There are a variety of portable photo printers available for you to choose from. They are mainly aimed at the people who want to take the prints from their phones, though some of them also work with computers. In our list, we have recommended some of the best portable photo printers that can deliver quality results for you. We hope this will make your decision easier.