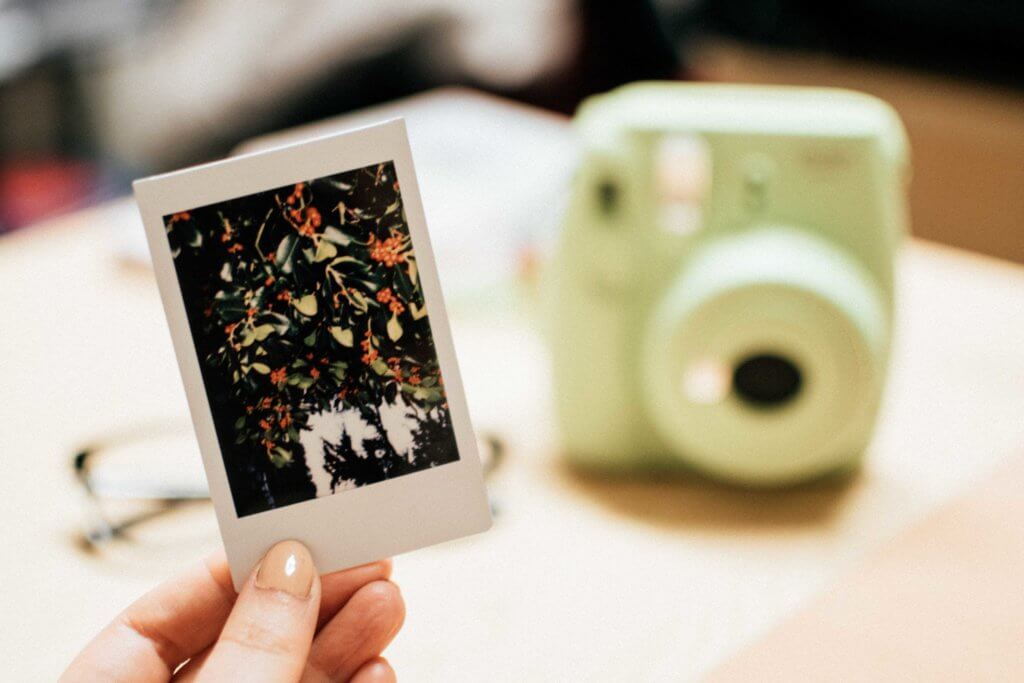 This type of camera harks back to the old Polaroid film days, where an instant reproduction of an image was quite the novelty. Especially when back in the day you had to wait up to a week to have a roll of film developed.

In our current digital imaging world, seeing an instant image preview is the norm. But, having an instant print of an image, not so much. These cameras are also not going to have the same optical quality as even a digital compact camera in many cases, but their unique look is an advantage.

I’ve seen plenty of these cameras being used at weddings for a photo wall of unique action shots. In other words, it’s about turning the idiosyncrasies of these cameras to your own creative advantages. Especially at events or gatherings, there’s nothing like taking away an image keepsake.

Let’s plow through some of the most popular choices in the instant film camera market and see what features these interesting cameras can provide.

If you’ve come across the Leica brand before, you’ll know that they produce the creme de la creme of cameras with a price point to match. This may make it seem a tad unusual for them to produce something like the SOFORT, but it means an extra slice of quality comes with this camera.

The Leica SOFORT accepts instax mini format film and features an Automatik-Hektor 60mm f/12.7 lens, which has an equivalent focal length of 34mm. The camera comes with automatic shooting modes, plus a three-zone manual focus system, which in reality is quite accurate.

Exposure compensation can be adjusted -0.7 or +0.7 EV, along with other useful features such as a self-timer, tripod thread, mechanical shutter with a range of 1/8 to 1/400 seconds, and automatic light metering. The rechargeable battery is good for roughly 100 images and the built-in flash is just about usable for close-up shots.

This camera is definitely fun to use and arguably has the best optics from this whole list. The camera also takes a little getting used to from an operational point of view and which lighting conditions work the best. Although the Leica SOFORT has a high price tag, it provides great quality images considering it’s an instant camera and carries the street cred of the Leica brand.

Polaroid was once the standard in instant cameras. It was so well known that it was one of those examples where the product became the name of the activity, e.g. taking a Polaroid picture. Now the company has the Polaroid SNAP Touch 2.0, which is almost halfway between a digital and instant camera.

The camera itself has a 13MP 1/3.2″ CMOS sensor with a 3.4mm f/2.8 lens, 3.5″ touchscreen LCD and is also capable of shooting HD 1080p videos. ZINK Zero Ink Technology is used for the printing side of things, with the camera having plenty of features such as a photobooth and burst mode, editing features, automatic timer, selfie mirror, USB port, microphone, speaker and MicroSD card slot.

While the picture quality is okay, Polaroid has tried to cram a lot of functionality into this camera. On the surface, this provides a lot of features, but the paper can work out to be expensive. Luckily, the camera doesn’t cost that much more than a basic instant camera, and it has a bunch more features than the rest if you want to expand and just have fun taking images.

The Fujifilm instax mini 90 NEO CLASSIC is an amalgamation of nostalgic design and electronic advancement. Thanks to its automatic shutter speed, you can capture fast-moving objects in high-quality. If you press the shutter twice, you can print two consecutive images on the same sheet and save yourself film and paper at the same time.

Similar to the lens of a digital camera, the instax mini 90 lens is retractable. With the help of a high-performance flash and a macro mode feature for subjects at a distance between 30-60cm, the instax mini 90 aims to withhold its exclusive name – the NEO CLASSIC.

Whether you opt to turn the flash on or leave it off, the NEO CLASSIC allows you to focus on your subjects with its double exposure feature as well. Apart from being sleek and stylish, the instax mini 90 NEO CLASSIC is a steal and comes with a warranty, a user manual, and a specs sheet for better understanding.

The camera has three shooting modes, which include flash on auto, flash on manual, and flash off manual. The lens has a maximum aperture of f/8 and has some fun and creative built-in features such as multiple exposures and long exposures to produce creative blur effects or light trails.

The manual switches are easily accessible and the included lenses are a fantastic way to expand the look and creativity of your images. As images can be produced a little darker than expected at times, the built-in flash works well for close-up portrait shots. In general, images look very old school and have a unique style under artificial lighting.

On the whole, this camera is competitively priced, looks fantastic and the additional lenses expand the scope of creativity.

Talking of Polaroid cameras, if you want to go down the full nostalgia route, then the Polaroid Originals OneStep2 is a great option. Based on the Polaroid OneStep version from 1977, this is as nostalgic as it gets in the instant camera world.

This Polaroid camera accepts both i-Type and 600 instant films and feels more robust than the originals, as it’s made from graphite polycarbonate. The lens has a focal length of 106mm, with a close focusing distance of two inches, a built-in flash, self-timer, and a built-in rechargeable battery.

The Polaroid film is excellent for this type of camera and for those who are old enough to remember the originals, the way it shoots out every exposure from the front is such a wonderful experience and is very nostalgic. On the whole, it’s a very basic camera and while image quality is on par with the rest, it’s the old school design which is the biggest standout point.

Shaped like a compact digital camera, the Fujifilm instax SQUARE SQ6 is a prime choice for experienced photographers as well as beginners.

This instant film camera is equipped with impressive features such as flash suppression for monitoring high-performance flash and shutter release per brightness, allowing you to take pictures in the dark. The SQ6 features auto-exposure control, but can only use 1:1 square film.

The SQ6 features three bright filters in colors orange, green, and purple for you to place in front of the flash and take pictures coordinated in hues. The SQ6 is operated with two CR2 batteries and has a high-end finish to complement its sleek design.

The KODAK PRINTOMATIC instant film camera mimics the sleek design of a digital camera while bringing nostalgia with its ability to print images on paper.

The KODAK PRINTOMATIC is a photographer’s ideal retreat, primarily because it is equipped with a microSD card slot for saving and choosing pictures before printing.

This instant film camera exclusively uses KODAK ZINC Photo Paper which is not only cheap, but it saves users from buying ink cartridges or film frequently. The PRINTOMATIC prints high-quality ten-megapixel images that are water-resilient, smudge-free, and wear-and-tear resistant.

This camera comes with a rechargeable battery and a neck-strap for high accessibility. At a low price, this instant film digital camera has landed on our bucket list of must-haves!

An instant film camera isn’t going to be the ultimate imaging solution for every type of scenario, but that’s not the point here. The idea is that these cameras are fun to use and provide people with instant memories. The image quality isn’t about pixel peeping or ultimate resolution, it’s about capturing the essence of the moment in a creative way.

This list contains plenty of instant film cameras that cover a wide variety of price points and features. This means instant point-and-shoot fun has never been more accessible.