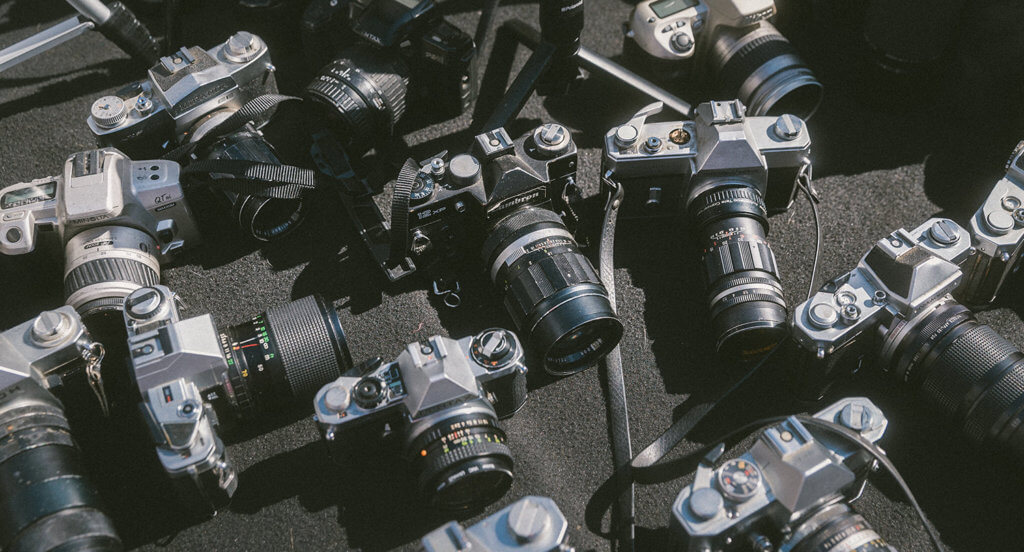 We’ve put together a list of the best 35mm film cameras, which are still popular, even with the new photography technology available on the market. Shooting with film can be a time-consuming process that yields unpredictable results, but photographers love film because of its timeless and vintage look. Even though 35mm film cameras are more commonplace, we have a 120 film camera on our list that is also classic and timeless.

While film photographs don’t always turn out as intended, they achieve a sought-after aesthetic and tonal quality without enhancement by filters or editing software. The resulting image often comes as a pleasant surprise, if not an error to learn from.

Shooting with a film camera is largely about the process. It offers ways of reconnecting with traditional techniques and experimenting without the assistance of automatic features and programmed settings. Film photography encourages a slower and more thoughtful process that can prove to be just as rewarding as the final image.

There are many types of film cameras available today. If you look carefully, you might find these cameras in specialty shops or second-hand film cameras awaiting rescue from antique stores. Many well-maintained film cameras are also finding their way to new owners with the help of various websites. Thanks to this resurgence of film photography, there are also many brand new film cameras appearing on the market. They range from high-end classics to plastic Lomography cameras. You can purchase film for these cameras from specialty retail stores or online from various vendors.

Which 35mm Film Cameras Are Best?

Whether you develop your film in a dark room or engage a professional to do it for you, film photographs are a timeless keepsake. Here are eight of the best film cameras available today:

This is the best overall 35mm film camera for photographers, recommended by Lumoid.

Perhaps the best link between film SLRs and digital SLRs is the Nikon F6. This top of the line 35mm film SLR is packed with features. The F6 comes with specs familiar to DSLR users like full program AE, manual mode, aperture priority, and shutter priority. It also comes with an optical TTL viewfinder, autofocus, and focal-plane shutter. Unlike purely manual film SLRs, The Nikon F6 requires batteries to run. It must also be paired with a Nikon F mount lens and 35mm film.

The Nikon F6’s sleek and minimalist aluminum alloy body even resembles modern digital SLRs. Though discontinued in many countries, it is still possible to buy this model new. We’ve chosen the F6 as the overall winner because it’s a reliable film camera from a proven maker. Designed for expert and professional photographers, it comes with all the bells and whistles for creating versatile images.

This is the best 35mm film camera for hobbyists.

The 1970s produced a strong range of 35mm film cameras including the Olympus OM-1. A design team led by Yoshihisa Maitani (creator of Pen and Pen F cameras) created the OM-1 to combat bulky and noisy 35mm SLRs. Released in 1972, the OM-1 grew popular because of its relatively small size, light weight, and quiet mechanics.

This OM-1 is a manual single-lens reflex camera. It comes with a large and bright optical TTL viewfinder with interchangeable focus screens and a through-the-lens light meter. It’s shutter speed ranges from a one-second exposure to 1/1000. This manually wound and focused camera takes 35mm film. The OM-1 is best suited for film enthusiasts looking for a purely mechanical SLR of great quality in a compact size.

This is the best 35mm film camera for beginners; built by Canon, you will love it.

The Canon AE-1 is a classic SLR that became popular after its introduction in 1976. Its plastic construction and use of 35mm film kept it relatively affordable and made it popular amongst enthusiasts. It also offered a shutter-priority mode in a time when most cameras featured aperture-priority.

The AE-1 has an electronic shutter that requires a battery to operate but this feature provides a wider and more consistent shutter speed range than its manual counterparts. It is compatible with lenses that fit the FD breech-lock bayonet mount that precede Canon’s EF mount but adapters are available.

This is the best all-purpose 35mm film camera and is a timeless classic.

Nikon’s FM2 is a 35mm film format SLR introduced in 1982. With a reputation for quality and durability, it became popular among enthusiasts and pros even though smaller and cheaper SLRs with electronic controls were available.

The FM2 features a 1/4000 second top shutter speed and sturdy copper-aluminum-silicon alloy body. It also has a fully mechanical vertical metal shutter that works without a battery. The only camera component that requires a battery to operate is the internal light meter. The FM2 is compatible with Nikon F mount lenses.

One of the best 35mm film cameras in its day, this camera is the best in terms of features for money.

If you’re after an iconic 35mm SLR, look no further than Leica’s M6. Though the M4 model that preceded it is a quality choice, the M6 offers a much sleeker design. The Leica M6 was manufactured from 1984 to 2002 and became known as the “Classic” to set it apart from the MG TTL model.

The M6 features a mechanical shutter and black-painted body with lighter magnesium alloy top and bottom plates. All functions work without a battery except its off-the-shutter light meter, which has LED arrows in the viewfinder. Shutter speeds range from one-second exposures to 1/1000.

Even though it’s not a 35mm film camera, the Hasselblad 500 C/M is still one of the best film cameras on the market.

The Hasselblad 500 C/M is a modular medium format film camera that helped Hasselblad solidify its reputation when it was introduced in 1970. Although the 500 series had been around since 1957, the 500 C/M arrived with a brand new feature – interchangeable parts. The camera’s six lenses, four viewfinders, and four film backs offer enough combinations to suit any photographer.

There are other modular film SLRs on the market including the more affordable Japanese Mamiya RZ67 Pro II. With that said, the 500 C/M’s Carl Zeiss lens gives it the upper hand in terms of image sharpness.

One thing to consider is that this medium format camera requires 120 film. Unlike 35mm, 120 film only has 12-16 exposures on each roll and is often more expensive to buy or develop. Still, Hasselblad’s 500 C/M remains a reliable and highly-coveted film camera.

This is one of the best 35mm film cameras in terms of size.

The Lomography LC-A+ (Lomo Kompakt Automat) is a compact film camera that takes 35mm film. Its predecessor, the LC-A, was introduced in 1984 by the Leningrad Optics and Mechanics Association (LOMO). In 1992, Viennese LC-A enthusiasts founded the Lomographic Society, which eventually became the Lomographische AG company. They produce the popular Diana and Holga models but their LC-A+ remains a classic.

Despite Lomography cameras being dubbed ‘toy cameras’, they are entirely functional. They also tend to produce images with the vignettes, light leaks, blur, contrast, and distortions characteristic of Lomography. While some photographers might look down on this plastic camera, there is something to be said about the spontaneous spirit and acceptance of imperfection behind the Lomography movement.

Pentax’s K1000 is a no-nonsense manual film SLR camera with a reputation for being indestructible. The camera entered the market in 1976. Stripped down for simplicity, affordability, and durability, the K1000 remains a favorite amongst students and lecturers.

The Pentax K1000 uses 35mm film and lenses that fit the Pentax K mount. It has three shooting modes: shutter speed, aperture, and focus. Although its light meter requires an A76 battery, the shutter is purely mechanical and can capture photos without one. There is no on or off button either. Once you’ve loaded the film and set the camera for film speed, this Pentax is always ready to snap a photo. The K100 is a great budget option for anyone getting into film photography because it’s a reliable yet straightforward camera that lets you focus on your subject.

It is an understatement to say that film cameras come in all shapes and sizes. They can be vintage or new, alloy or plastic, and disposable or collectible. Some come with familiar settings while others won’t ever need to be charged. This list highlights some of the best film cameras you can choose from but as you shop, remember the principals of film photography: take your time and embrace the process.