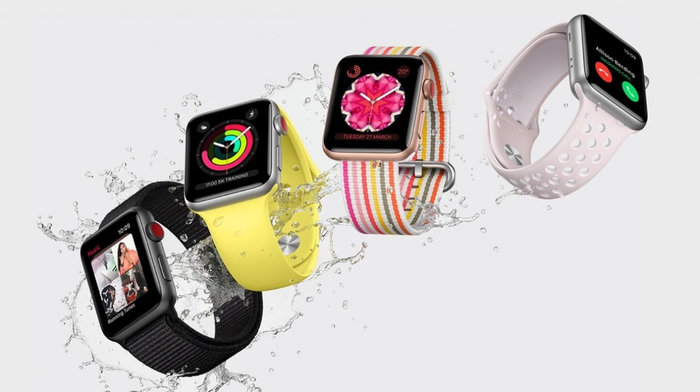 Wearable technology is the current Next Big Thing. Fitness tracking and other health-related monitoring is one of the primary reasons for the current popularity of smartwatches. In September 2018, Apple Inc. released the latest version in the line of Apple Watches, the Apple Watch Series 4.

What Does an Apple Watch Do?

The Apple Watch Series 4 has some amazing features. Besides built-in or downloadable apps that can track your exercising, walking, or jogging, this new device can monitor your heart and even notify emergency services of falls or accidents. The heart monitor tracks more than pulse rate, but also has an FDA approved ECG system for very sophisticated health monitoring.

Apple Watches have other capabilities, such as storage of digital files like music or photos. They can connect via Wi-Fi or by an iPhone to enable messaging and other communication. A series of entertaining games is available to download, so a person can pass the time while waiting for the racquetball court to clear.

Oh yeah, one last thing: They can tell time. Watch display can be digital or it can mimic an analog watch face. Apple Watches have full timer, stopwatch, and alarm clock capability. It’s easy to see why Apple watches are popular items.

You may wonder, how did we get to this point where we have such sophisticated devices we can wear on our wrists? What is the history of the Apple Watch?

To understand the history of wearable technology like the Apple Watch, we actually have to look at three separate trends. First is the advent of the wristwatch, second is the evolution of portable digital devices, and third is the continued rise in popularity of fitness.

Clocks have been in existence for thousands of years, in one form or another. The development of accurate, repeatable mechanisms for clocks led to the idea of making them small enough to carry around. In the 16th century, inventors were creating watches, as the portable clocks were called, that were small enough to be put on neck chains, carried in pockets, and attached to wristbands.

In the early 20th century, wrist watches were popularized by daring aviators, such as Alberto Santos-Dumont. They wore their watches as a wristwatch, instead of the pocket watch, so that their hands could be free for operating the controls or their flying machines. So, the idea of wearing necessary technology on one’s wrist was cemented into the minds of many.

Dick Tracy, a fictional comic book character of the 1940s, combined the wristwatch with other technology, namely a two-way radio. Later, this item morphed into ever more capable communication and crime-fighting devices. We mention this to show how ingrained it is into people’s minds to wear tech items on the wrist.

It seems that anything that people use for entertainment, communication, or calculation, eventually gets made portable. The trend started some time ago with analog devices. Instead of staying at home to listen to the radio, we were shrinking them and putting them in cars. Then, transistor technology allowed even smaller radios that could be carried around in a pocket.

Not just radios, either. A home HiFi set could be condensed into a small battery powered tape player and headphones. Thus, came to market, around the early 1980s, the Walkman.

In the world of computational devices, pocket calculators became immensely popular in the 1970s and 1980s. These weren’t just adding machines, they could do more complex equations such as percentages, square roots, and other basic math. Scientific calculators could plot graphs and compute sines and cosines, among other things.

Somewhere around this time period, pocket paging became cheap enough services to be used by the masses. Cellular telephones came into the picture around this time, as well. One of the things that some people noticed was that wristwatches began to be left at home because the pagers and portable phones had clocks built into them.

By the decade of the 1990s, calculating devices, phone books, and other tech had found their way into portable digital devices called PDAs, or personal digital assistants. It wasn’t long before all these things, music players, clocks, calculators, telephones, and PDAs were combined into all-in-one devices called smartphones.

Apple Inc. tapped into this trend and came out with the very capable and full-featured iPhone line of portable smartphones. The iPhone is firmly entrenched into modern society around the world. There is also the iPod, a very portable digital MP3 player. Portable MP3 players pretty much replaced the transistor radio and Walkman-style tape players for portable listening devices.

This isn’t really a craze, but more of a continually growing mindset of a better way to look at the advantages of remaining physically fit for as long as possible.

Wearable technology fit right in with this trend as people used the Walkman to listen to music while jogging, later grabbing the MP3 players and smartphones to listen to live or prerecorded programs of anything.

While jogging, walking, or just going through the movement of everyday activities, people desired a way to keep track of what they were doing. Pedometers could be worn on a belt loop or waistband and allowed you to count your steps or mileage, leading to calculations of caloric intake vs calorie burning.

Soon, other technology showed up which combined pedometers with calculating programs for calories. These could be worn around the waist, the chest, and finally on the wrist. Current fitness trackers can also monitor some body-vital signs such as pulse rate and temperature.

By around the middle of the 2000s decade, companies like Fitbit were reaping the benefits of selling personal health monitoring devices that could either be worn on the wrist, or that had the display on a wrist-worn device. Many people were very involved in their own personal health and the demand for more and more sophisticated wearable devices kept going up.

Sometime in 2010 or 2011, having already taken over a huge part of the portable MP3 player market, Apple began development of an even more capable device. The idea of the developers was to blend together features from a variety of portable digital devices.

Take a digital MP3 player, add to it the fitness tracking features that were becoming more and more in demand, mix in some limited communication capabilities, and make it all fit into a wearable tech that could worn on a wrist. Being a wrist wearable design was a central idea for this new item. A smartwatch, but with a huge array of features.

In 2014, Apple Inc. announced that they were bringing out a wrist device that would combine various fitness tracking functions with other computational and entertainment functions. Thus came the Apple Watch, released in early 2015.

The original Apple Watch took the market by storm, quickly becoming the most sold wearable technology device of that year. This is what people were looking for. An item that could go anywhere with them, be out of the way on the wrist, and with multiple functions including health and fitness applications.

Apple watches could store digital files and play them back. So, you can listen to music or podcasts of whatever interests you while exercising or moving about throughout your day. Bluetooth allows the headphones to be wireless. Linked in through later models of iPhones, and you even text or e-mail from your watch.

In 2016, we saw the release of the Apple Watch Series 2 which added extra features. One of the added features is GPS which is useful for map applications and for any needed emergency services, such as accident response or a health crisis.

September 2018 saw the release of Apple Watch Series 4. This smartwatch incorporates an ECG and is capable of two-way communication with emergency services by means of a built-in microphone. A full range of features is accessed in conjunction with select models of iPhones, and its own built-in wireless technology allows use of certain health-related and other functions anywhere with WiFi.

Here are some sample prices for what you can expect to pay for the each of the Apple Watch series, including the 1st Generation which is being discontinued.

The Future of the Apple Watch

With the processing power and display options on the new Apple Watch Series 4, one can speculate about how far this technology will take us. As with computers, digital cameras, and smartphones, capabilities keep growing. Soon, we will probably be able to access two-way video transmission like the Dick Tracy wrist TV/radio. Maybe like Star Trek, we will be able to tap into a centralized computer hub from our wearable device to do any computer task from anywhere in the world.

The history of the Apple Watch is short so far. But it points to a future full of options. Just a few years ago, who of us could have imagined that one small, extremely portable device could be with us anywhere and allow communication and computing that rival what an office full of technology can accomplish? And yet, that’s essentially what we have with smartphones already.

Some things to look for in future Apple Watches may include additional entertainment options. Maybe live streaming of TV programs. What about linking with VR headsets for the ultimate in entertainment while exercising? Of course, full phone communication functions would be nice. We’ll just have to wait and see. This is Apple Inc. after all. More features are sure to be incorporated into these amazing smartwatches.

Smartwatches are a fantastic outgrowth of all that modern technology, adding in entertainment and communication options along with health and fitness capabilities. Stay tuned for more exciting things to come.